Launched in the year 2009 with the aim of replacing conventional fiat currencies, Bitcoin (BTC) has grown astronomically in value over the years and has become the gold standard of the crypto industry today. While there are millions of people who use Bitcoin as a safe value storage medium to hedge against inflation, there are others who actively trade it too, to exploit its frequent price fluctuations.

It has managed to make big headways into the global financial system and is rapidly emerging as a potential frontrunner in a space that’s been historically dominated by the central banking authorities.

Where to Buy Bitcoin?

With a 24-hour trading volume of $23.7 billion at the time of writing, there’s a very clear interest in buying and selling Bitcoin in the market. Regulated brokers are one of the best places to buy BTC in the market today. We’ve done a thorough research and have shortlisted some of the best online brokers that can help you make a safe and smooth BTC purchase.

A Brief History on the Price of Bitcoin

Let’s take you over some of the noteworthy events that have impacted Bitcoin’s value in the recent past and also understand how this pioneering cryptocurrency has evolved over the past decade, by glancing at its historical timeline.

Bitcoin’s price history is a clear reflection of the price volatility that the cryptocurrency market is widely recognised for. Its first significant price jump happened in 2010 when BTC appreciated from $0.0008 to $0.08 within a short span of time. It witnessed multiple rallies and crashes thereafter, month after month, and year after year.

On the whole, it won’t be wrong to state that Bitcoin investors have had to face quite a bumpy ride over the past 12 years. But the ones who stayed invested have reaped huge benefits.

Bitcoin’s next significant ascent happened in 2011 when its price jumped from $1 in April that year to a high of $32 in June 2011. A pullback followed, with bullish and bearish forces settling the coin in the $13 region by August 2012.

Then came 2013, one of the most decisive years for Bitcoin’s price. A couple of huge rallies that year, one in April, and another towards the year-end, spiked up its value to $1,121 by December 2013. Tyler and Cameron Winklevoss, the American entrepreneurs popularly known as Winklevoss Brothers bought $11 million worth of Bitcoins in April that year and did their bit to keep the bullish sentiment going.

In December 2013, multiple financial authorities in different countries including Denmark, China, Lebanon, France, Malaysia and Norway, issued warnings against Bitcoin and other cryptocurrencies. As a result, BTC price gradually went south, receding to under $300 level by January 2015, only regaining its lost ground later that year when it consistently maintained an above-$400 level, with a push towards $500 and beyond by mid-2016.

This was also the time when Bitcoin’s adoption was growing consistently across multiple industries including Gaming, Public Transport, Hospitality and more. On the other hand, downtrends were witnessed whenever there were any government crackdowns on crypto in any part of the world.

BTC was hovering around $1,000 at the start of 2017, a period that preceded the 5th significant rally that catapulted its price close to $20,000 by mid-December 2017. This was on the back of the Japanese government having declared Bitcoin as a legal property and payment method earlier in April that year, and several other adoption measures that followed in other parts of the world.

A slow correction followed, which continued for the most part of 2018, pulling BTC back into lower $3000s in early 2019. A continued bull-bear tussle created a new resistance level at $10,000 by 2020, a trend that continued for the entire pandemic year.

With many people investing in Bitcoin due to the uncertain economic circumstances resulting from the Covid-19 pandemic, BTC was back in business, and was trading well over $20,000 by mid-December 2020.

Not many people were aware that it was preparing for a historic bull run that would push its price to an all-time high of $64,804.72 on April 14 2021. This was on the back of Elon Musk’s significant announcement in early February 2021 about Tesla buying $1.5 billion BTC, and accepting it as a payment for its cars.

However, it was Elon Musk who also brought about BTC’s downfall a little later in May when he announced his fallout with Bitcoin owing to its environmental concerns. The next major blow was dealt by the crypto crackdown in China that sent the entire crypto market crashing down on May 19, 2021, wiping off more than half of BTC’s gains and pushing it below $30,000 for a brief period of time. A new resistance level of $42,000 has been created since then and BTC continues to chase it even at the time of writing, trading at $38,397.

July 29, 2011 —  MyBitcoin, a Bitcoin wallet service shuts down abruptly. The founder goes missing and all the wallets are frozen. Bitcoin price – $13.8.

March 25, 2014 —  The Internal Revenue Service (IRS) of the United States announces that it will treat Bitcoin as a property for tax purposes. Bitcoin price – $584.44.

April 1, 2017 —  A Japanese law comes into force that brings the Bitcoin exchanges under the purview of Know Your Customer (KYC) and Anti Money Laundering (AML) rules. It also recognises Bitcoin as a type of prepaid payment instrument. Bitcoin price – $1098.07.

January 17, 2018 —  Chinese authorities express their intent to strengthen the ban placed in late 2017 on use of cryptocurrency and Bitcoin exchanges. Bitcoin price – $11,569.42.

September 14, 2018 —  Hackers steal $60 million worth of Bitcoin and a couple of other cryptocurrencies from Zaif, a well-known Japanese cryptocurrency exchange. Bitcoin price – $6500.

May 7, 2020 —  Paul Tudor Jones, the well-known American hedge fund manager buys a large amount of Bitcoin as an inflation hedge to guard against excessive money printing by central banks all over the world. Bitcoin price – $9959.17.

October 21, 2020 —  PayPal, the popular American financial services company, launches a new service for its US customers, allowing them to easily buy, sell or hold Bitcoin directly through PayPal. Bitcoin price – $12,806.44.

While Bitcoin was created to serve as a digital currency, it has attracted a great amount of interest from both long-term and short-term investors. As its value has increased exponentially over the past decade, it is often compared with a number of other tradable assets. Let’s look at how Bitcoin fares against certain commodities, fiat currencies and its closest competitor, Ethereum.

Compare Bitcoin with US Dollar

As the global economy continues to be in a recovery mode, trying to find its feet after the financial blow dealt by the Covid19 pandemic, the US Dollar has been quite resilient and has held onto its value fairly well so far in the year 2021. However, the same can’t be said about Bitcoin. BTC witnessed plenty of price fluctuations in the year’s first half, impacting the rest of the crypto market as well. It touched an all-time high in April, and was testing the $42,000 resistance level at the time of writing, recovering well after the May 19 crypto market crash.

Often referred to as the Digital Gold, Bitcoin has been compared to the yellow metal time and again, since its inception. Both are commonly used as safe options for value storage today and witnessed notable price appreciation in 2020 and afterwards. While Gold was trading at $2,067 per troy ounce in August 2020, it has come down by a few hundred dollars over the past year, and had reached $1814 per troy ounce at the time of writing. But its performance pales in comparison to its digital counterpart that was trading at around $10,000 for most of 2020, but witnessed a phenomenal rally in the first few months of 2021, which led to its price increase by over 600%, reaching $64,804.72 on April 14, 2021.

Although Bitcoin and Ethereum are two completely different cryptocurrencies, with significantly distinct valuations and fundamentals, their price charts follow the same trajectory whenever any price fluctuations are witnessed in the crypto market. Hence, while Ethereum rallied from $738 per ETH on January 1, 2021 to an all-time high of $4,356.99 on May 12, 2021, Bitcoin too had a similar growth chart, appreciating from around $29,000 at the start of the year, to its all-time high in mid-April.

As detailed above, BTC witnessed a significant price rally during the first few months of 2021. Considering that Bitcoin is by far the most widely-adopted cryptocurrency in the world, with huge amounts of investments coming in now from the institutional investors too, it won’t be wrong to state that it’ll continue to be the flagbearer of the crypto economy for a long time to come.

As per a bold prediction, in April this year, just before BTC touched its all-time high, the Manhattan-based media and financial services major predicted that the coin will spike sharply by the end of 2021, and reach a whopping $400,000 valuation by the end of Q4, 2021. Obviously, they didn’t foresee Elon Musk pulling the plug on the coin and the crypto crash that followed afterwards on May 19, courtesy of a crackdown on the industry in China.

Nonetheless, the overall outlook for the coin is still bullish for the remaining part of the year. Let’s refer to the BTC/USD price chart below. It’s pretty clear that Bitcoin is on an upward trend here, with its price having crossed the 50 SMA at close to $35,000 on July 24, 2021. Most of the candles that follow are well above the 50 SMA mark, indicating a positive market sentiment. RSI is over 50 and MACD too crossed above the signal line on July 22; continuing to stay over the signal line since then.

All these accentuate a bullish grip. If things go its way, and more positive news flows in from multiple quarters, there’s a very good possibility that BTC may witness another significant rally towards the end of the year. While the $400,000 price point may be quite off the mark, $100,000 looks achievable. One expert report concurs with that assessment. 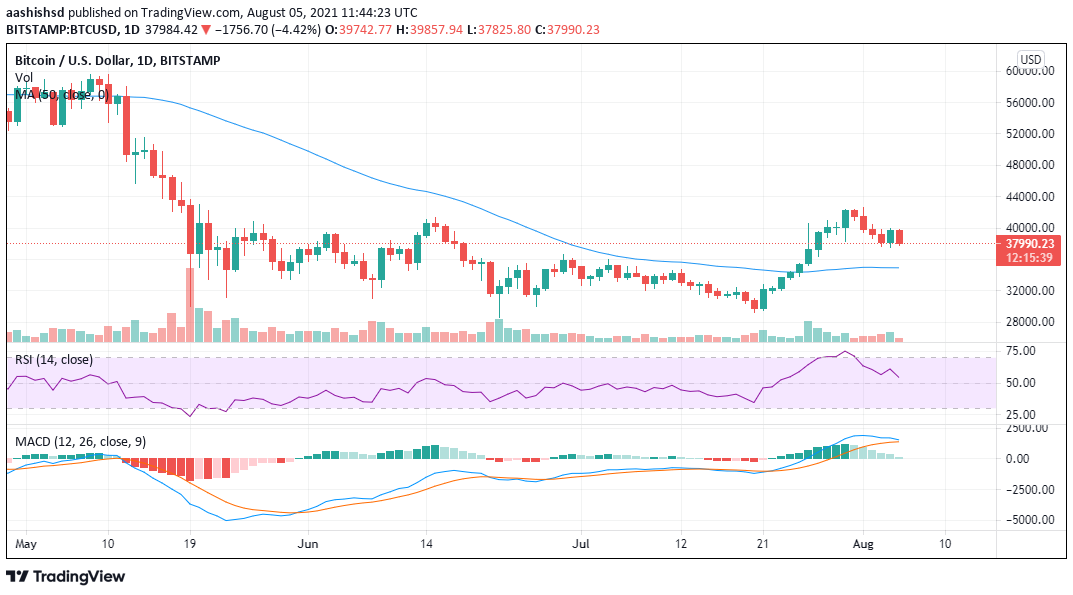 There are multiple factors that will weigh in to determine Bitcoin's price in 2022. Despite continuing to receive institutional investments from multiple quarters like MassMutual, SkyBridge Capital, Guggenheim and more, and witnessing legalisation in various countries, there are certain factors that might slow its further gains in the future. It remains to be seen how the crypto crackdown unfolds in China. Bearish news from different quarters may also prove to be a deterrent in its price rise.

Though it’s extremely difficult to make any kind of reasonable forecast about a cryptocurrency’s possible price, that far ahead into the future, the constant efforts being put in to make Bitcoin more environment-friendly and to increase its efficiency, all point to continuous appreciation in its value, in the next few years and beyond. Most experts have predicted BTC to be trading in the vicinity of $150,000 by 2025.

Bitcoin like any other cryptocurrency has its own set of detractors and advocates. However, it can’t be denied that it has brought about a revolution in the financial world that’s gone far beyond the point to be stopped now. People, businesses and even governments are using BTC to hedge against inflation. Bitcoin has seen a lot of institutional interest and it seems like more retail investors will also consider buying the coin as most veteran investors predict that its price will rise considerably in the future.

Should you buy bitcoin amidst the ongoing market sell-off?

5 Reasons Why You Should Buy Bitcoin (BTC)