The skyrocketing rise of bitcoin is the reason for the development of this ICO, cryptocurrency and blockchain advertising solution. rn

Founded in 2017, YMA Enterprises Inc. is a growing company based and operated in Switzerland, Zürich and aim to provide a highly-selective service with a worldwide community.

Living in the cryptocurrency era, we are currently immersed in the phenomena surrounding cryptocurrencies. Most old-school companies and businessmen can’t cope with the market gap that is taking up more capitalization by the second.

Thus, we needed a solution up to the standards of the situation. It is the time for an innovative and user-friendly advertising network to conduct ICOs and promote businesses globally. Having this goal in mind, YMA Enterprises Inc. developed ADconity.com: the all-in-one ICO, cryptocurrency, and niche blockchain advertising network.

The project has progressed notably in just a couple of months, considering that the beta version launch was announced not too long ago, in early November 2017.

By that time, the users were able to sign up in ADconity.com to promote their websites. The soft launch of the project took place in late November 2017 adding more features and enabling more users to join the platform actively. The platform was live!

Some weeks later, a more extended beta testing stage of the service started shortly after the New Year. Some users signed up invited to this hooking post on BitcoinTalk.org from early January 2018. Acting quickly, they could get a special bonus with free advertising in the network in exchange for their valuable insight on the usability and overall performance of the release.

Starting it slowly but surely – as the ADconity.com spokesperson stated in the official Twitter account – users have been able to register on ADconity.com since the first days of December. From that stage, members of the network could promote their websites to earn some bitcoins using the network in the best way possible according to their needs.

On January 13th, ADconity.com was more live than ever. The ICO, blockchain, and cryptocurrency advertising network claim at that moment was of no less than a 25-USD bonus for 10 USD sign-up. Quite a good deal, if you asked me. – added the ADconity.com spokesperson during the conversation.

On January 16th, the offer changed to a 50-USD free bonus for advertisers and up to 90% revenue share for publishers. Any user signing up on ADconity.com in the following days will be able to profit from this great deal.

Join ADconity.com today to get off to start promoting your business.

The core feature of the network is to focus on the buoyant cryptocurrency sector. Among the variables under control that the users will manage on this platform are the following: CPM, CPC, CPA and POPs, interstitial, banner, text and more handy features to come soon.

“Our cryptocurrency, ICO and blockchain ad network bases its functionality in the simplicity, quality, and trustworthiness.” – ADconity.com spokesperson.

There is a high-quality control to maintain the standards of the ad-environment net. The advertisers can create their ads in text or banner, POP format to be distributed within the publisher network. Publishers earn bitcoins for the valid clicks on their websites. It’s a win-win scenario.

The icing on the cake is the maximum revenue guarantee from ADconity.com by rendering ads from the priciest bidders in the platform. The rich media platform will also provide competitive pricing for both parties. 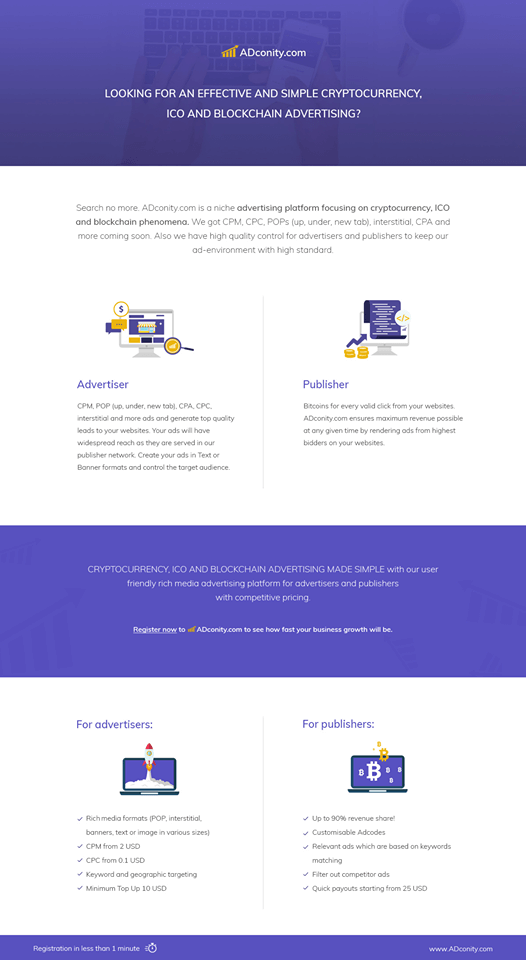 But, there is more to get from this innovative ad scheme for the new era. Advertisers have access to competitive promotion services, such as purchasing CPM from 2 USD and CPC from 0.1 USD. The keyword and geographical targeting are also included in the features of the pack. The min top up price is just 10 USD.

Publishers also benefit a great deal with the network. Influencers earn up to 90% of the revenue share with 100% customizable codes for the ads. Moreover, the ads are displayed in function of matching keywords to improve search results. There is the possibility of filtering competitors’ ads. And, let us not forget the low payouts cap of just 25 USD.

Sign in on ADconity.com – the user-friendly cryptocurrency, ICO, and blockchain rich media advertising platform with competitive pricing. The registration takes less than 60 seconds.

Company founded in 2017 in the crest of the bitcoin wave. Their ad platform project, ADconity.com, is being developed by a small yet brave team of experts. The quick development, from beta launch to release in just two months, has positioned ADconity.com in the radar of advertisers and publishers looking to get started in monetizing with cryptocurrencies worldwide.