The gambling and betting company that has raised over $ 1.2 million in a week on a Pre-sale meets with potential users and investors at the largest blockchain events in Asia before the start of the main stage of the ICO.rn 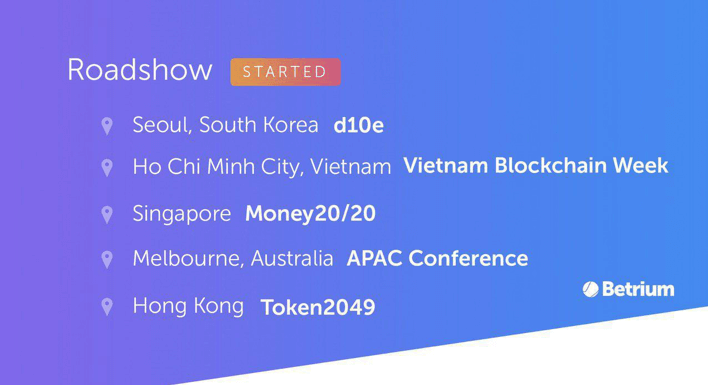 The blockchain market should know about such a product as Betrium. The company changes the approach to organization and earnings on gambling.

Korean and international audience again inspired the company to further advance our project. Betrium will actively expand into the Korean market.

The team met a lot of people who took a special interest in Betrium. This is a Positive sign that Blockchain technology is becoming even more widely recognised in the gambling sector.

At Vietnam Blockchain Week the team was among thousands of professionals in finance, marketing, and technology who exchanged their experience and knowledge.

The roadshow concludes at Token2049, the largest digital asset event in Asia and where people who represent the most exciting projects in the crypto space come to Hong Kong to share their knowledge and stories, providing exceptional insights into the ever-larger growing crypto ecosystem.

The tour of Asia has energized the team and made it clear that there is a high demand for Betrium in the market, ready for the main stage of the ICO which begins soon.

The platform’s BTRM token has been distributed in its Early pre-ICO and its pre-ICO and the main ICO will begin on March 26th, ending on 29th April.

A total of 63 million BTRM tokens will be sold during the token sale, at a dynamic price. Per one ETH token, investors will be able to acquire between 3,000 and 1,200 BTRM tokens. A demo version of the Betrium platform is already available so potential investors can check it out. To keep up with the project, follow Betrium on Twitter and Facebook, or join the conversation on Telegram. Users are thoroughly advised to read the project’s whitepaper.