Binance token (BNB) enjoyed a steady run over the weekend transcending its previous all-time high. This happened as the chief executive at Binance confirmed that the 14th burn would happen early this week.

Cutting above its ATH

Binance Coin’s highest ever recorded price before the weekend was $45.162. The token’s total market cap as it headed into the weekend was around $5.8 billion. However, trading activity over the weekend saw the token’s price soar from just above $40 to about $45. Its market cap has since climbed to $6.5 billion. In the last 12 hours, the token has gained even more upward momentum, shooting beyond $46. 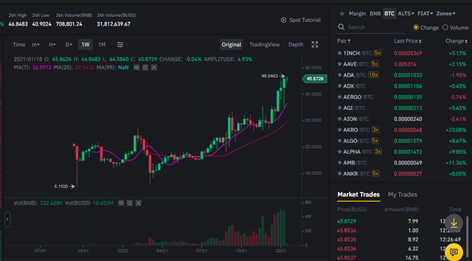 It is hard to rule out the possibility that its price will cut above $46.5 again and target $47 based on its price action in the past few hours.

Meanwhile, Changpeng Zhao ‘CZ’ has confirmed that the 14th scheduled BNB token burn will happen before Wednesday. The chief executive of the exchange posted the message yesterday on Twitter responding to a Twitter user ‘MankindBitcoin’ who inquired about the date of the event.

“Within the next 48 hours ish,” Changpeng Zhao wrote.

For the uninitiated, the token burn is a process which involves destruction of BNB tokens that are the equivalent 20% of the exchange’s quarterly profits. The process is done every quarter and so far, 13 token burns have been carried out.

The last burn happened in October last year where 2,253,888 tokens translating to about $68 million at the time were destroyed. The 14th burn is expected to be significantly bigger as price and trading volumes have gone up since October.

Where to buy Huobi Token: HT rallies 15% despite China crackdown