Home › Latest News › Bitcoin hits $43,000: Here’s why analysts are bullish for BTC in the short term

Bitcoin’s recovery continued on Monday after the weekend’s break above $40,000, with bulls testing resistance above $43,000.

The gains come after the stock market also saw the S&P 500 post its best week of the year so far, even as central banks take aggressive hawkish stances amid rising inflation. Bitcoin’s upward move could also have been fueled by positive news from automaker Tesla Inc., which on Monday said it holds nearly $2 billion worth of BTC.

So, what are analysts saying about Bitcoin’s short-term price picture?

“A positive Monday will be a good sign for the week to come, and a continuation of a cryptocurrency rebound,” Santiment wrote.

👀 Many eyes from the #crypto crowd will be on the incredibly close tie that #Bitcoin has had to the fluctuations of the volatile #SP500. A positive Monday will be a good sign for the week to come, and a continuation of a #cryptocurrency rebound. 🤞https://t.co/yw8WW8jskm pic.twitter.com/7aD0VLOm5L

Pseudonymous crypto trader and Bitcoin analyst Rekt Capital says Bitcoin seeing a new weekly close in the green “has partially confirmed a break back into the $38000-$43000 range.”

The upside also had Bitcoin hovering near its 50-week exponential moving average, which the analyst says is “a key Bull Market moving average.”

“The EMA represents a price point of ~$44000 and may figure as a resistance. However, turning it back into support would restore macro bullish bias for Bitcoin,” he added. 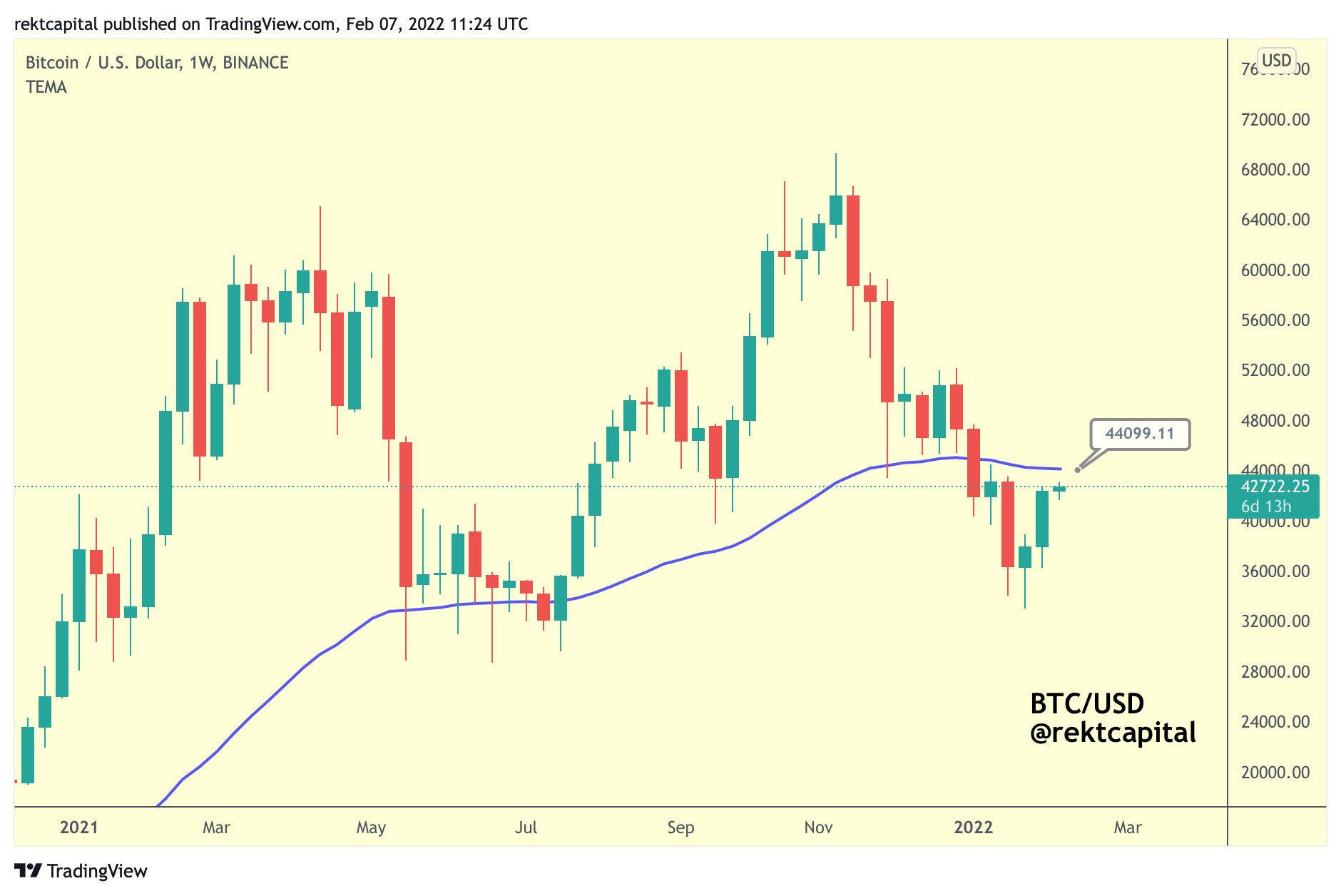 According to another analyst, the bounce means Bitcoin’s most “significant” barrier is now at $48,400.

#Bitcoin | The most significant resistance level ahead of $BTC sits around $48,400, based on @intotheblock's GIOM model. #BTC pic.twitter.com/RI8Wio3lZK

Josh Rager, another very popular crypto analyst says the strong weekly close could aid bulls’ push for a breakout to $50,000. He says the chances of more upward momentum will increase if BTC/USD manages another green week.

Lot's of chatter about bull-trap but R/R down here is decent especially when looking at higher time frames pic.twitter.com/v8ExJ3E855

Given these perspectives, a bullish week would likely see BTC/USD turn the $40-$3k supply wall into a demand zone. If bulls achieve this, they are likely to mirror the rebound seen last July, which came after a 50%+ drawdown that started in May.

Bitcoin dipped more than 20% in January and lost more than 50% of its value before the rebound from lows of $33k.

Top 3 centralized exchange tokens to buy the dip in

Why USD Coin remains under Tether’s shadow despite growing interest