Coinizy, a Bitcoin startup headquartered in Canada, has officially launched in beta a service that allows users to cash out their bitcoins through a wide range of methods including PayPal.

Launched at La Maison du Bitcoin, a space dedicated to the digital currency in the heart of Paris, Coinizy promises to provide users with the most extensive range of withdrawal methods and “the easiest way to convert bitcoin to fiat money.”

The platform exclusively provides bitcoin-to-fiat exchange services with no less than seven different ways of withdrawing bitcoins, “each one potentially corresponding to a particular use case,” according to the company.

Hence, users of Coinizy can choose to cash out via PayPal, Okpay e-wallets, Western Union, MasterCard, or simply opt for the traditional bank wire.

E-wallet provider PayPal has a long history of hostility towards bitcoin. In fact, several cases have been reported of bitcoin startups getting their PayPal account closed.

Since there is a great demand for a withdrawing method via PayPal, Coinizy came out with a solution to this problem: PayPal withdrawals are processed by a third-party financial institution based in Hong Kong “with no direct links to bitcoin.” 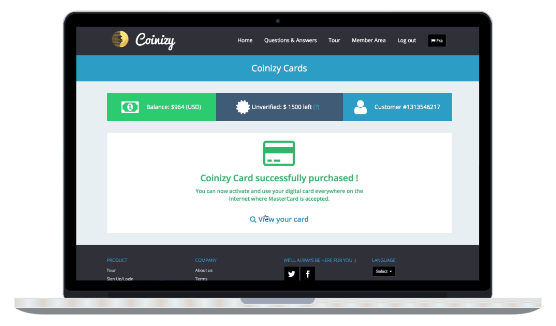 In addition to its extensive list of withdrawing methods, Coinizy also offers three different bitcoin debit cards: two plastic cards and one virtual card that is instantly generated and delivered by email. “I wanted to offer a range of bitcoin debit cards wider than the competition,” Yannick Losbar, CEO and founder of Coinizy, told CoinJournal.

“Our intent is to offer bitcoin holders a product range of debit cards as complete as their own bank’s one.”

Coinizy doesn’t hold any of users funds as the bitcoins are immediately sold during the depositing process. “Since we only provide fiat currency withdrawals, there is no need to keep bitcoins deposited by our customers,” Losbar said.

“The fact that we don’t accept any fiat currency as a depositing method led us to be exempted by the Canadian Financial Services Regulation Authority, FINTRAC, from the need to register as a Money Services Business and all the heavy additional compliance requirements that necessarily comes along.”

Losbar, a French native, said that he chose to incorporate his venture in Canada because the “legal context there is extremely favorable for bitcoin startups.”

“Our business model was reviewed and we had been granted a derogation considering that we only process exchanges from bitcoin to fiat and not the opposite,” Losbar explained.

“This places us in a legal gray area at the time being for the simple reason that bitcoin IS NOT CONSIDERED as a legal tender [in Canada]. Legally speaking, we could be exchanging Hello Kitty teddy bears for dollars, this would be exactly the same.”

As of its fee structure, Coinizy charges a one-time fee of 10% each time a user deposits bitcoins.

“This can seem high at first sight but it is associated with the lack of any other fee involved in the process, no matter the amount and the use (transfers to other users, multiple withdrawals…),” Losbar said.

“We opted for this model instead of the ‘fees all along the way’ approach that is being done in the sector so far, and which, when all fees are cumulated, results most of the time in a much superior fee. Our logic is really a ‘what you see if what you get’ approach as the balance of our users really corresponds to what they will receive when they withdrawal their funds.”