Cosmos (ATOM) price could jump to $10.00 if bulls manage to keep prices above the upper limit of an ascending parallel channel

Cosmos is among a handful of altcoins trading double digits on the day as they target new highs. Polkadot (DOT) has also surged by more than 30% to cut above $14.00, while ChainLink is looking to hit $20.00 after surging 16% in the past 24 hours.

For Cosmos, trading with a bullish bias could help its price surpass $10 in the next few sessions. This will likely be the scenario if bulls manage to close above $8.00 on the daily chart. 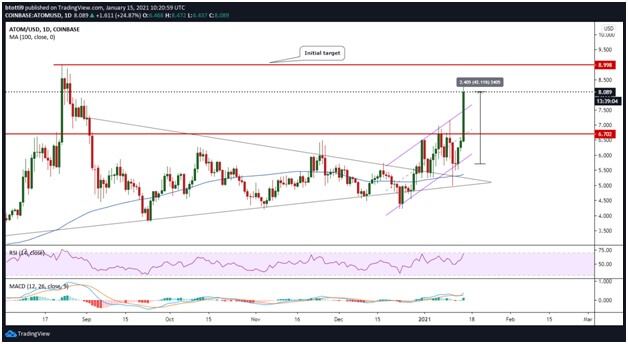 Cosmos is trading above an ascending parallel channel that materialised after a breakout from a contracting triangle pattern towards the end of December last year.

The upside also comes after bulls managed to regroup following a dip to support at the lower boundary of the parallel channel around $5.70. Previously, ATOM had sunk below the 100-SMA ($5.36) and touched lows of $4.98.

After breaking above the aforementioned channel’s upper boundary, bulls raced to highs of $8.48. That helped establish support at $6.07, a previous horizontal resistance level. Currently, buyers are struggling with downside pressure, but the strengthening MACD and upturned RSI on the daily chart suggests another leg up is likely.

The 4-hour chart also shows that bulls are facing increased pressure as suggested by the candlestick patterns. However, both the RSI and the MACD indicate bulls are in command. If ATOM/USD remains above the previous resistance-turned-support line at $6.90, bulls have the room to attempt a break to the stated target (daily chart). 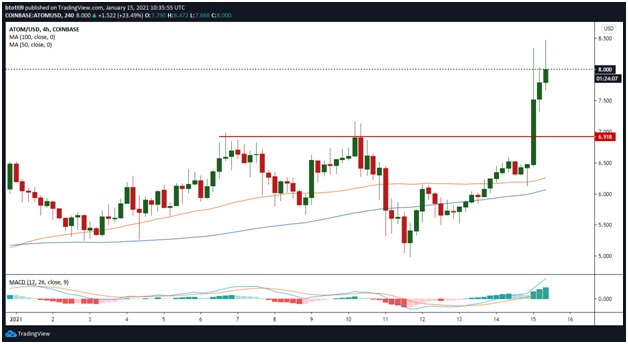 On the contrary, the 50-day SMA ($6.25) and 100-day SMA ($6.07) provide initial support levels on the 4-hour chart. An increased presence of shorts at these levels could, however, suggest a broader correction.

Notably, the hourly RSI is turning from overbought conditions and the hourly MACD is suggesting a weakening bullish bias. But the 4-hour and daily charts feature these technical indicators in bullish mode. This suggests a short term retreat might be the opportunity bulls need to freshen up.

However, if prices slide further, the main anchor will be at $5.00. More losses could see bulls seek to defend their territory near a robust support base marked by the horizontal line at $4.50.