EOS price plunged to lows of $2.42 even as the rest of the market struggled with widespread sell-offs

EOS has nosedived to lows of $2.42, losing nearly 30% of its value since Block.one CTO Dan Larimer announced that he was resigning.

Mr. Larimer is a prominent crypto figure, and more so within the team that spearheaded the launch of the EOS network following a $4 billion ICO. But it appears the project hasn’t worked for him, with his next target being to create “tools that people can use to secure their own freedom”.

Although widespread sell-off pressure across the market was already pushing EOS lower, Dan Larimer’s announcement appears to have added to the overall dump.

According to CoinMarketCap, EOS price dropped 14% on Sunday and has continued in the red even as other coins look to bounce back. Overall, EOS/USD is about 30% down in the past 24 hours. On the major trading platform Binance, the EOS price has touched an intraday high of $3.16 and an intraday low of $2.42.

The cryptocurrency currently trades around $2.67 and has a market cap of $2.4 billion.

The rejection for EOS price near $4.00 indicates a potential double top pattern on the daily chart. As the chart shows, EOS/USD has broken below the 50-day and 100-day simple moving averages ($2.93 and $2.76) and short term ascending trendline.

If bulls fail to reclaim the area around the100-SMA, it’s likely sellers could extend their dominance to $2.40. The daily candlestick shows that bears have already come close to testing this support zone. Bulls have so far propped prices above the crucial anchor, but exhaustion could allow for losses towards $2.31. 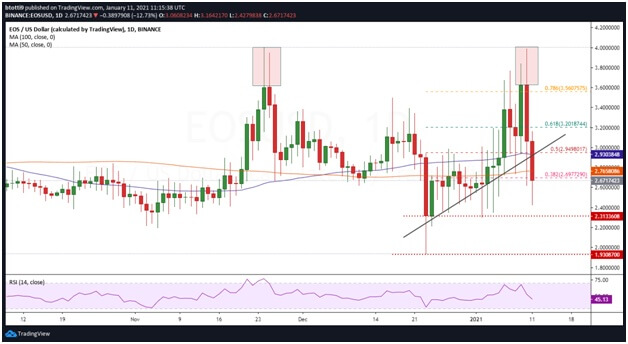 On the upside, bulls need to break resistance at the 50% Fibonacci retracement level ($2.94) to build momentum towards the next barrier around the 61.8% Fib level ($3.20). If support at this zone holds, buying pressure could push EOS/USD to $3.56.

While the above scenario is very much likely, the downsloping RSI hands the advantage to the bears. 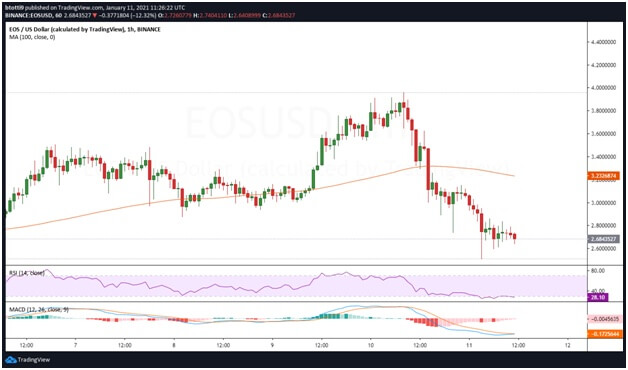 On the hourly chart, the EOS price broke below the 100 hourly simple moving average and extended the breakdown towards the critical support zone of $2.40. The hourly RSI is oversold to suggest that bears have control. The MACD also supports a short term bearish outlook but is suggesting a hidden flip that could strengthen if bulls push prices to above $3.00.