Dogecoin spiked after Musk said he was not selling his cryptos.

Dogecoin (DOGE) is the largest of the meme coins that came to prominence in 2020. While the meme coin fever has slowed down significantly, Dogecoin remains one of the most likely to pump if the market turns bullish again. That’s because it has the backing of Elon Musk, one of the wealthiest people in the world and a powerful voice in crypto.

His power was most evident in May 2021, when the price of Bitcoin tanked after he questioned its environmental credentials. Today, his influence on the market was reinforced after he stated that he would not be selling his crypto holdings, including Dogecoin.

The impact of Musk’s sentiment was a massive uptick in the price of Dogecoin before it continued with the range-bound trading that has characterized its price action over the past few weeks.

The implication is that Dogecoin could be crypto that could give investors extraordinary returns once the markets turn bullish again. That’s because Elon Musk has his eyes set on space colonization and has been very vocal about it. Back in 2021, he announced that he was looking into interplanetary commerce and cryptos in it.

He was even part of a project called Doge-1, whose goal was to test the applicability of Dogecoin in interplanetary commerce. While the Doge-1 mission seems to have slowed down, there are always the prospects that it could come back and easily push Dogecoin to new heights.

Dogecoin continues trading in a range. 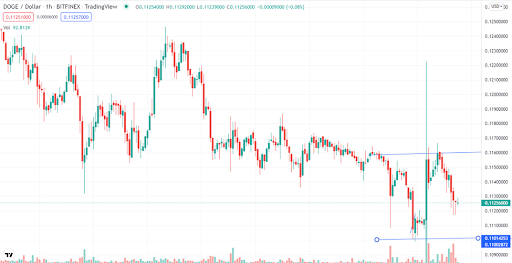 However, if bears take control and push Dogecoin through the lower bound at $0.1104, then prices below $0.10 could easily become a reality in the short term.

Dogecoin spiked on March 14th after Elon Musk said that he would not sell any of his crypto holdings. It goes to show that Elon Musk has significant sway on Dogecoin. If his forays into space are anything to go by, Dogecoin could see a massive rally if he chooses it for any of his space adventures.

Three DeFi coins to buy by the end of May