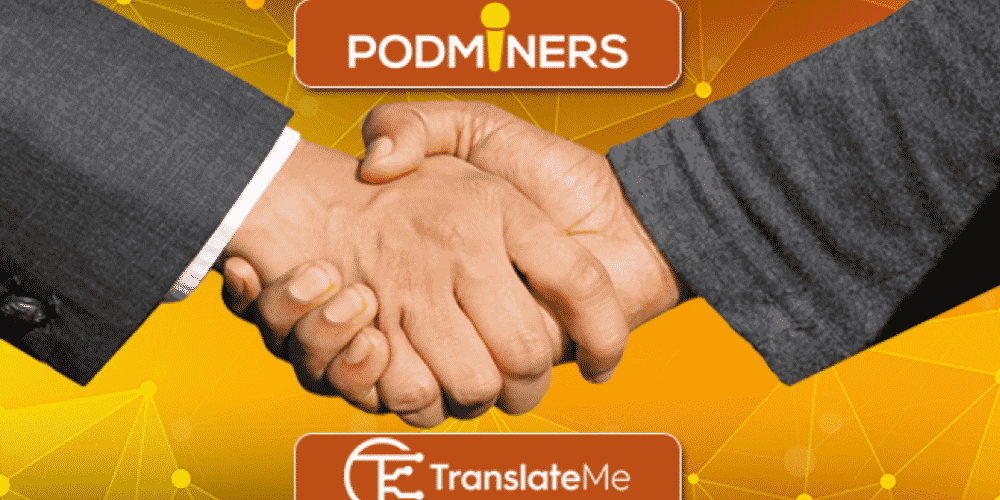 Digital Radio and podcasting platform PodMiners has announced a partnership with TranslateMe Network, a decentralized machine translation solution provider, to present the podcast transcripts in various languages as its future scope.rnTranslateMe Network is a decentralized network of people and machine providing text and speech translation services in 6500 languages. It is the first-ever platform to train its algorithm by collecting the data in the form of corrections made by millions of human contributors. With this exciting new partnership, it will be easy for podcasters to translate their podcast transcripts in as many languages as they want.

PodMiners is a digital radio and podcasting medium that claims to be the first blockchain-based platform promoting freedom of speech. The company has reportedly introduced the beta version of the product and is ready to launch their ICO Private Sale in August 2019.

As per other reports, the Founder and CEO of ABBC Foundation (ABBC COIN), Jason Daniel Paul Philip, has also joined hands with this startup. ABBC Foundation is building a blockchain-based payment solution using facial recognition technology and blockchain for payment security. ABBC has recently launched its crypto-friendly eCommerce store and also launching Bitstorm exchange for cryptocurrencies.

In a statement, the Founder & CEO of PodMiners, Avinash Chauhan said, "Many people like to read newspapers or watch videos or listen to the audio content in their regional languages. And it's not possible for one content creator to provide the content in so many languages. No doubt we have the option to translate the written content online but the results are not appreciable. TranslateMe Network is using blockchain algorithms with machine learning for translation of text and speech which I found very innovative and unique. The translation is being done by machine and human contributors. Which means their system will get accurate with the time for sure. We joined hands with the company as an initiative by PodMiners so that our specially-abled audience who are unable to hear can easily find the text transcriptions of their shows and can read show content in their regional languages."

The beta version of PodMiners is available to use for free of cost. Content creators can upload their pre-recorded episodes to the website. They can also live stream their show with enabled live calling feature. The blockchain implementation will provide transparency and will help to cut down the major existing barriers like third party interference, delayed payments, ad frauds and many more.