Ripple’s (XRP/USD) has been trading in a choppy pattern for almost a month now. Quick short-term price appreciations have been followed by almost an equivalent of declines. The upside has rarely surpassed $0.54, while the downside has held to $0.43. However, the price action shows that XRP bulls are relentless.

Well, Ripple’s case with the SEC remains a focal point. Of course, both parties submitted their motions for a summary judgement last month. While the SEC has held its ground, Ripple is optimistic about triumphing against the regulator. XRP gained strongly in September on the back of positive expectations of the case resolution.

The recent sluggishness of XRP occurs due to the lack of sufficient catalyst for further upside. Ripple’s CEO Brad Garlinghouse has expressed disappointment with the SEC. He has pointed out that litigation is not about the law but power.

In a statement during the DC Fintech Week, Garlinghouse said that he expects a resolution in the first half of next year. That suggests that the case’s outcome comes up to the second quarter. The indication could be a little of a disappointment to the XRP enthusiasts. As CoinJournal reported, the investors had earmarked an “end game” as soon as the end of this year or early 2023. Still, the expectation could be met if the resolution occurs early in the first quarter.

Aside from the SEC case proceeding, Ripple has had positive developments lately. The blockchain is seeking to bring Ethereum smart contracts to its ledger. The move would increase liquidity for XRP through the new sidechain. XRP has shown limited movement since the news dropped.

XRP in choppy movement after the latest surge 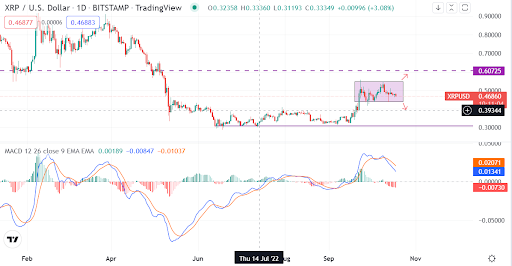 The daily chart shows that XRP lacks a directional basis. Nonetheless, the cryptocurrency has maintained the previous gains as bulls are relentless at $0.43. Momentum is weakening as a MACD bearish crossover was initiated about a week ago. However, we can’t reliably say the token is bearish.

Should you buy XRP?

At the current level, XRP is not attractive. The current choppy pattern could force a price break to the upside or downside depending on the existing sentiment.