Previous article What is Ethereum Name Service, and does it present an opportunity? Next article

Start
Home Latest Cryptocurrency News What is Ethereum Name Service, and does it present an opportunity?

What is Ethereum Name Service, and does it present an opportunity?

Ethereum Name Service ENS/USD is a decentralised naming platform for wallets and websites. It is a permissionless network that maps human-readable names to machine-perceivable identities.

Such identifiers include crypto addresses, metadata, and content hashes. Simply put, ENS domains are customised digital wallets with identifiable names. To own one of them, a user must pay a certain amount of fee.

ENS is a token used in facilitating the Ethereum Name Service DAO. The ERC-20 utility crypto is up 8% in the past day, with a cumulative weekly gain of 13%. The bullishness perfectly aligns with the recent strong fundamentals of the network.

Data from ENS domains shows that new registrations shot 57% to 437,000 last month. A large part of the domains came from OpenSea. The NFT platform accounted for up to 97% of the registrations, earning $5.5 million in revenue. Still, Paradigm.eth remains the most expensive domain ever sold at $2 million.

Technically, ENS is looking solid with a clear uptrend. But how far can it go?

ENS rebounds from an ascending trendline 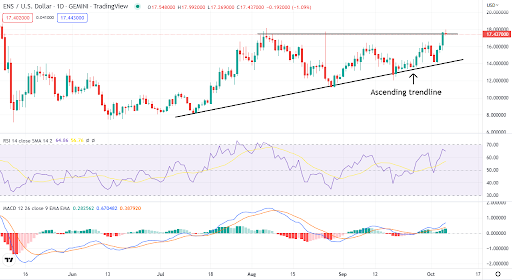 According to the daily chart above, ENS has bounced off the ascending trendline severally. The token is currently attempting to overcome $17 resistance. At press time, it was trading for $17.47, almost half a cent above the level.

Of importance to note, the MACD momentum indicator is looking bullish with green histograms. However, the RSI is approaching the overbought zone, currently at 65. It means a consolidation or a full correction could occur before a clearance above the resistance zone.

ENS fundamentally occupies an important spot in the crypto space. A surge in domain name registrations could increase its value in the long term. However, despite the bullish view, ENS lacks the strength to claim higher levels, at least in the near term.

An opportunity to enter can only be called above the resistance zone. Otherwise, there are chances the token could retest the ascending trendline.

ApeCoin hits resistance after a weekly surge. What next as the staking feature nears?

Here is the key update causing Chainlink to rally. Is a breakout imminent?

Fantom eyes a breakout. Is the token about to post sustainable gains?