The Most Successful Crypto Countries In The World

Cryptocurrency is one of the fastest growing industries on the planet, from what once was simply a form of electronic cash, to a global financial revolution that has created billionaire investors and piqued the interests of celebrities all over the world.

With billion-dollar companies having easy access to trading applications, the modernisation of fintech has allowed the biggest companies in the world to become even more powerful. The huge rise in media attention has made crypto trading more attractive and accessible for investors from all corners of the world to get involved in financial technology.

After the birth of Bitcoin, the first cryptocurrency, solutions had to be found in order to trade them. In 2013, Bitcoin managed to reach parity with the US Dollar, and since then, investors have chosen to buy Bitcoin as the currency became greater in value.

Big cryptocurrency hotspots like the USA, India and the UK have shown a keen interest in trading, but which countries have become the most successful in the crypto world?

Here at CoinJournal, we wanted to explore which countries have become the most powerful in the crypto industry, by analyzing data such as the countries with the highest cryptocurrency owners, the number of crypto startup companies by country, and the total estimated gains for cryptocurrency by country.

The Most Successful Crypto Countries in the World 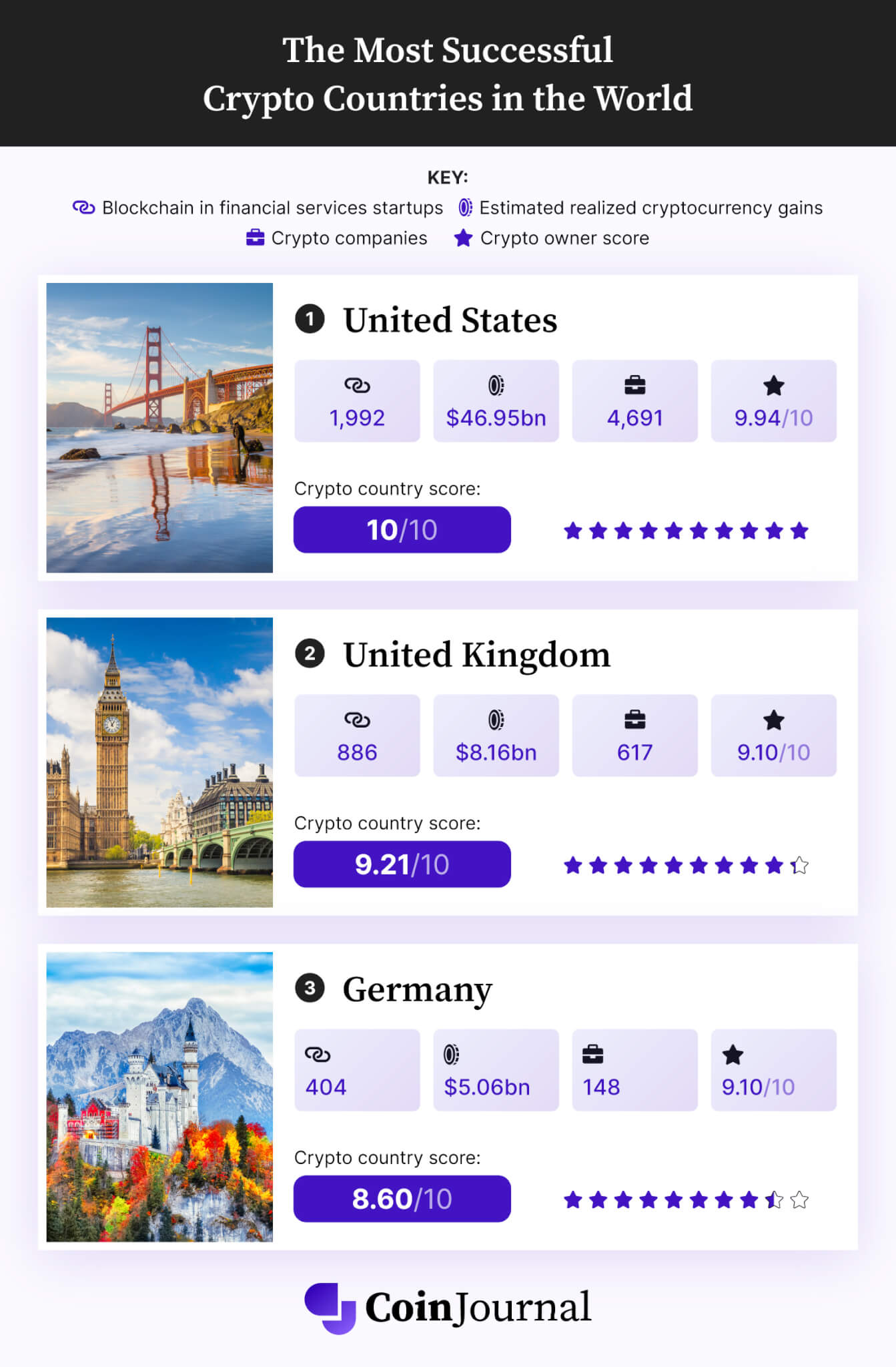 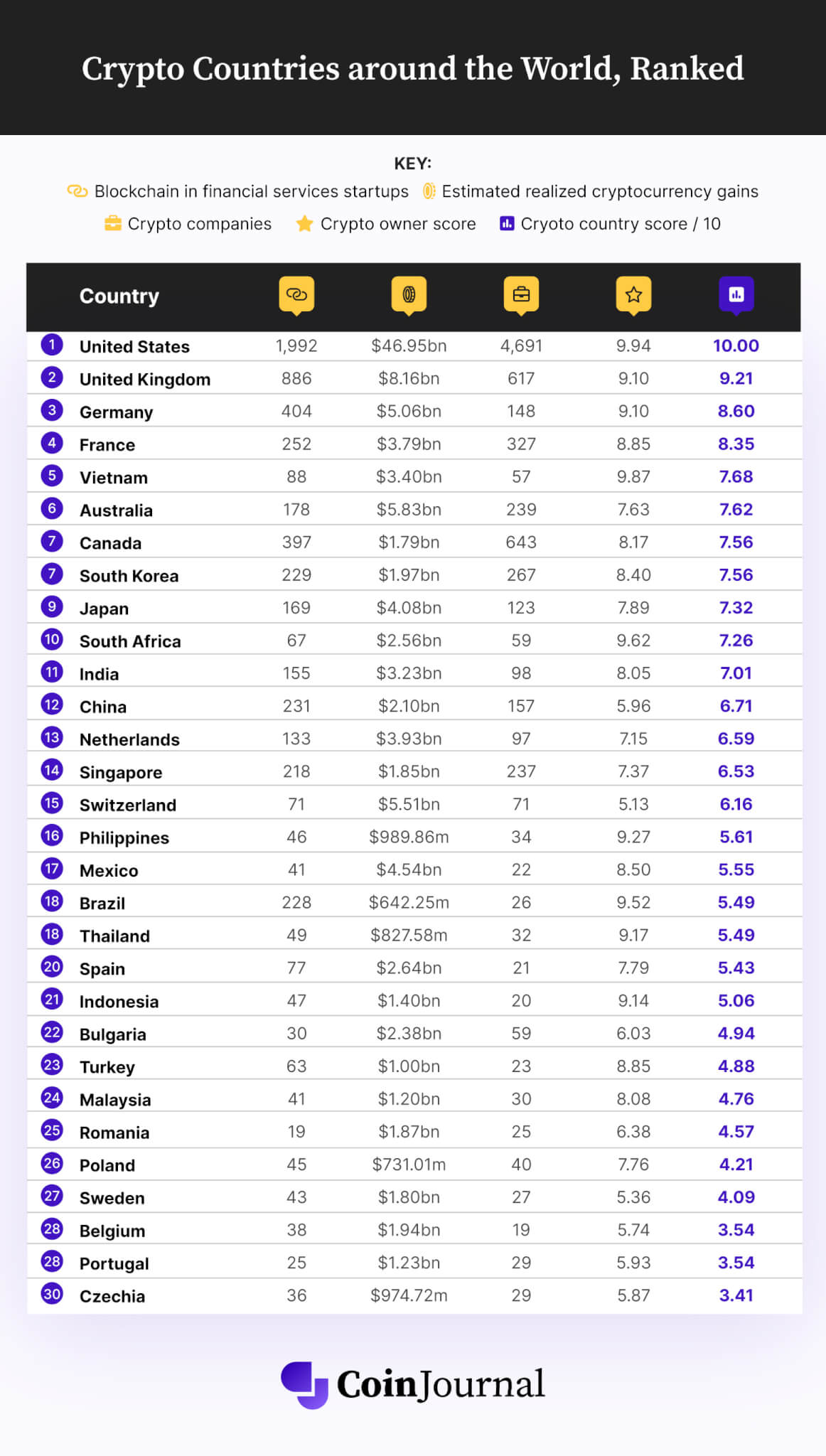 The cryptocurrency industry is constantly changing and adapting to new technologies, and so analyzing crypto success by country is difficult, due to the technology’s decentralized nature.

However, we can take good estimates of each country’s contribution to cryptocurrency success by looking at multiple factors, which include; the number of cryptocurrency owners by country, investment companies, crypto startups, and the estimated average gains from crypto per country. Here are our results:

The United States has dominated the crypto universe for some time, with cryptocurrency invented in 2008 and Bitcoin in 2009 by an unnamed individual, who speculators believe was residing in California.

The United States scored highly for almost all factors, including 1,992 cryptocurrency startups, and its estimated realized crypto gains in 2021 of $46.9 billion. The US also operates the most investment companies, with over 4,600 involved with crypto. The US scored 9.94 out of 10 in terms of its owners of crypto, which was based on the number of crypto owners as well as the percentage of the population involved with crypto.

The United Kingdom scored in second place for the most successful crypto countries, with a score of 9.21 out of 10, falling slightly behind its neighbour in the US. The UK is continuously building its trade of crypto, with a multitude of crypto startups launching in London.

Germany is the third most successful crypto country in the world, with a score of 8.6 out of 10. Startups play an important role in developing new technologies, and Germany still has a way to go in terms of crypto startups. Recent research showed that Germany needs to provide a competitive startup environment, in which blockchain startups can grow.

Germany currently has 404 crypto startups, and 148 crypto companies operating in the country. Germany realized $5 billion in cryptocurrency gains in 2021, falling behind the US and the UK by a substantial margin. Germany scored slightly lower than the United States in terms of its crypto engagement. Germany had a combined score of 9.10 out of 10 for crypto owners and the percentage of the population involved with crypto.

The most crypto owners by country 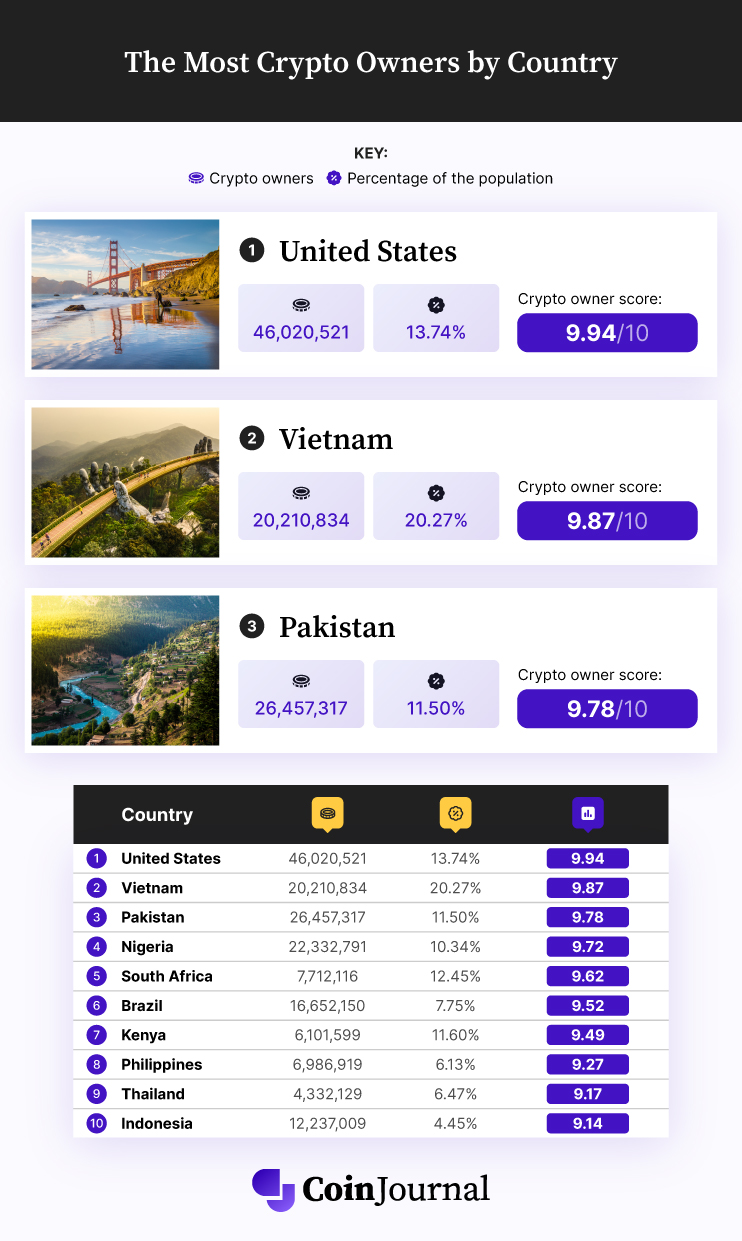 The United States had by far the largest number of crypto owners, with over 46 million active traders of cryptocurrency in the country as of 2021. There was a total of 13.74% of the US population involved in crypto. Many state governments have passed laws which affect cryptocurrency and blockchain technology, as a response to local demand and interest in the industry.

Vietnam came in second place for the highest number of crypto owners by country, with over 20 million active traders of cryptocurrency in 2021. There was also a higher percentage of the population involved in crypto than in the US (20.27%). There are a number of driving factors for the growth of crypto in Vietnam, one of them being that there are no crypto taxes in the country.

Vietnam also has a hugely unbanked population, meaning that residents have limited access to financial services. Recent research carried out by Statista ranked Vietnam as the second among the top ten unbanked nations.

Pakistan ranked in third place for the countries with the highest number of cryptocurrency owners, with almost 26.5 million active traders in the country. Pakistan had a lower percentage of the population involved in crypto than Vietnam and the US (11.5%).

The third highest adoption of cryptocurrency owners, Pakistan, has no regulation that allows its funds to nurture and grow the field based on adoption. Without direction from the government, there is no control over which investors interact with currency in the country. Experts have urged that regulation is urgently needed to reap the benefits of Pakistan’s crypto revolution.

The Most Crypto Companies by Country 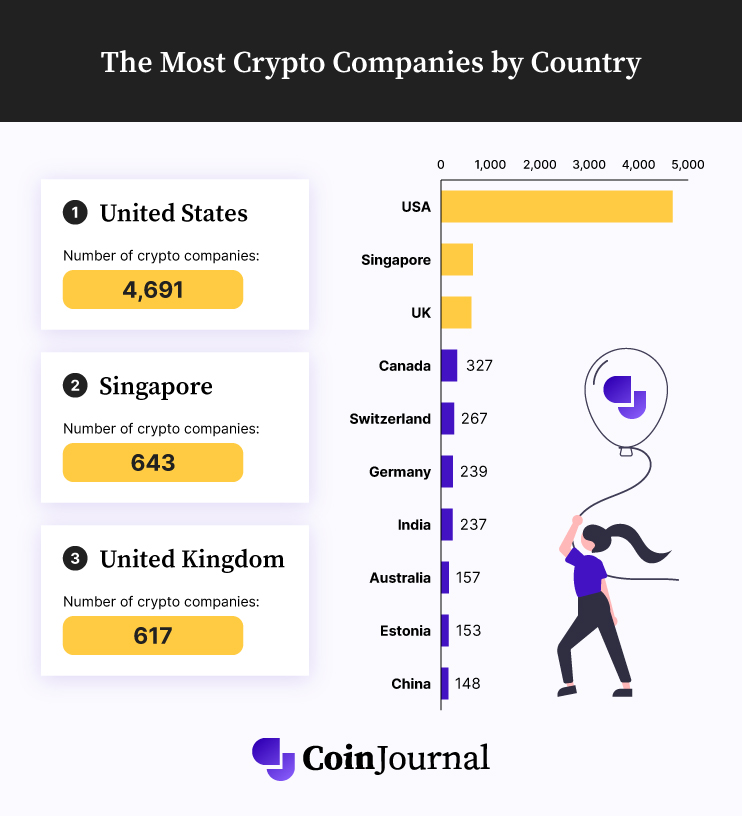 Once again, the United States took the top spot for its staggering number of 4,691 crypto companies. More than half of the world’s largest crypto companies are U.S. based, including Coinbase, the largest cryptocurrency exchange in the US. US traders on Binance, Bittrex and Poloniex make up a substantial 24%, 27% and 28% of crypto traders in the US, according to a recent report from Triple A.

Singapore took second place for the most crypto companies by country, although the numbers were much less prominent than in the US, with 643 cryptocurrency companies. High-profile crypto controversy has hit headlines in the country, as the co-founder of collapsed cryptocurrency operator, Terraform Labs, has damaged the reputation of cryptocurrency in Singapore.

Experts in crypto have said the list of scandals and collapses in the country has had an impact on the regulation and stability, as well as tax-friendliness for crypto companies and investors.

Companies and startups in the UK have pushed their focus to cryptocurrency and Blockchain, including Blockchain.com, Elliptic and Wirex who have secured funding from investors to boost growth. The UK’s newest prime minister has vocally advocated for crypto and blockchain technology, which could see a government boost for the industry. 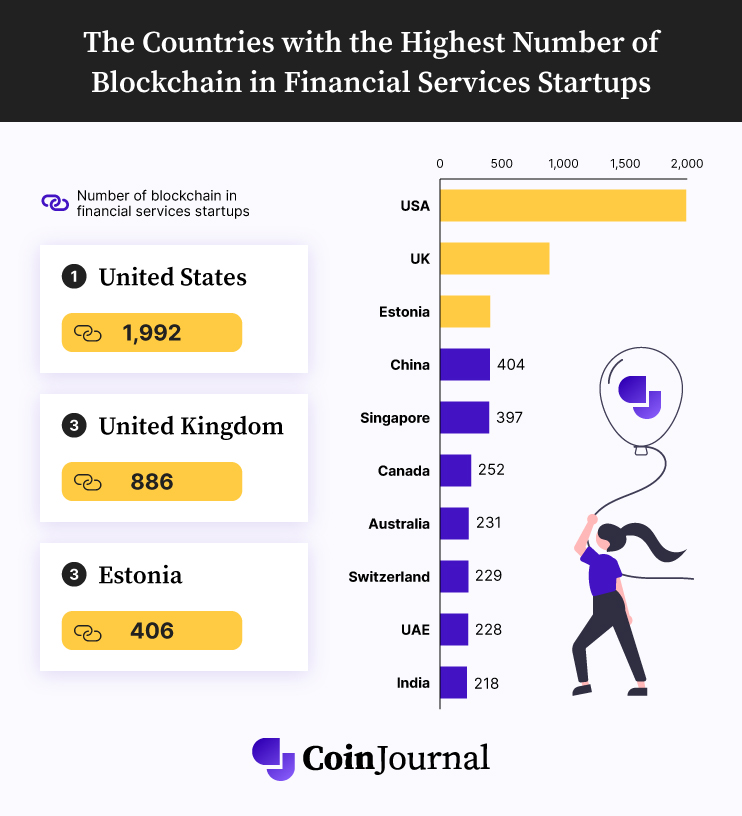 The global blockchain market is expected to soar across the world in years to come, so we wanted to explore which countries had the highest number of startups to enter the cryptocurrency industry.

The United States dominates the cryptocurrency industry in terms of its number of startups, with 1,992 blockchain in cryptocurrency startups. According to an analysis by Blockdata, 40 top US corporations invested $6 billion into blockchain startups between September 2021 and June 2022.

The United Kingdom had the second highest number of startups, with 886 blockchain in financial services startups in 2021. The UK’s capital, London, has been praised as a hotspot for blockchain startups, and possibly one of the most popular cryptocurrency wallets, Blockchain.com has seen tremendous growth. It could be argued that it is one of the most successful tech startups in the UK.

Estonia had the third highest number of investment startups, with 406 blockchain in financial services startups. Estonia is now a cashless society with the majority of financial transactions being digital. Estonia has become a hotspot for European crypto companies, and the popularity of the industry and growth would pique the interest of investors in any blockchain solutions.

The Countries with the Highest Cryptocurrency Gains 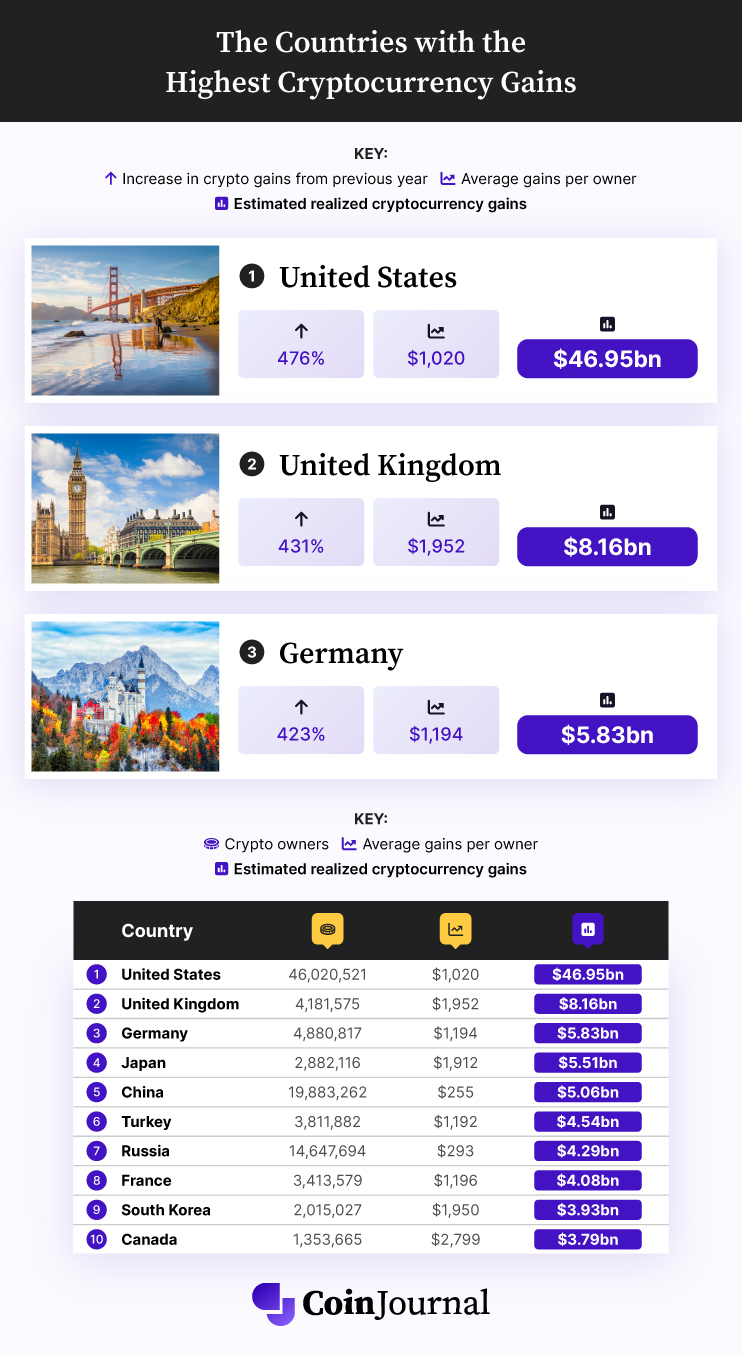 We will now switch our attention to cryptocurrency assets, by looking at the geography and comparing cryptocurrency gains by country. By using Chainanalysis’ transaction and web traffic data, we will explore estimates of cryptocurrency activity by country from the year of 2021. To explore a different angle, we will also look at the estimated average gains per cryptocurrency owner in each country.

The country with the highest cryptocurrency gains in 2021 was the United States, with an estimated gain for investors of almost $47 billion, dominating the rest of the world by a wide margin.

Investors in crypto from the US realized gains nearly six times higher than in the United Kingdom, the second-highest country in terms of total estimated realized crypto gains. The US saw explosive growth in adoption and realized gains, with the total estimated gains in 2021 up 476% from $8.1 billion in 2020, according to Chainanalysis. The average cryptocurrency earnings per owner in the US is $1,020.

Crypto investors in the United Kingdom realized $8.1 billion in gains during 2021, following the US by quite some distance. The UK witnessed substantial cryptocurrency gains in 2021, with a 431% increase since the previous year, according to Chainanalysis. The average estimated gains per cryptocurrency owner in the UK is $1,952.

Crypto investors in Germany realized $5.8 billion in gains in 2021, a growth of 423% from the previous year, falling slightly behind the United Kingdom, according to Chainanalysis. The estimated gains per cryptocurrency owner in Germany is $1,194.

The Most Successful Crypto Countries in the World

To find the overall most successful crypto countries in the world, we took all our factors below and ranked the countries based on the score for each factor, to give a normalized score out of 10.

The Most Crypto Owners by Country

To find the number of cryptocurrency owners by country, we took Triple A’s Cryptocurrency

across the world list and compared the number of cryptocurrency owners in each country by the percentage of the population involved with crypto, to get a normalized score out of 10. We then ranked the countries based on their score. This data is accurate as of 3/11/2022.

The Most Crypto Companies by Country

The Countries with the Highest Number of Crypto Startups

The Countries with the Highest Cryptocurrency Gains