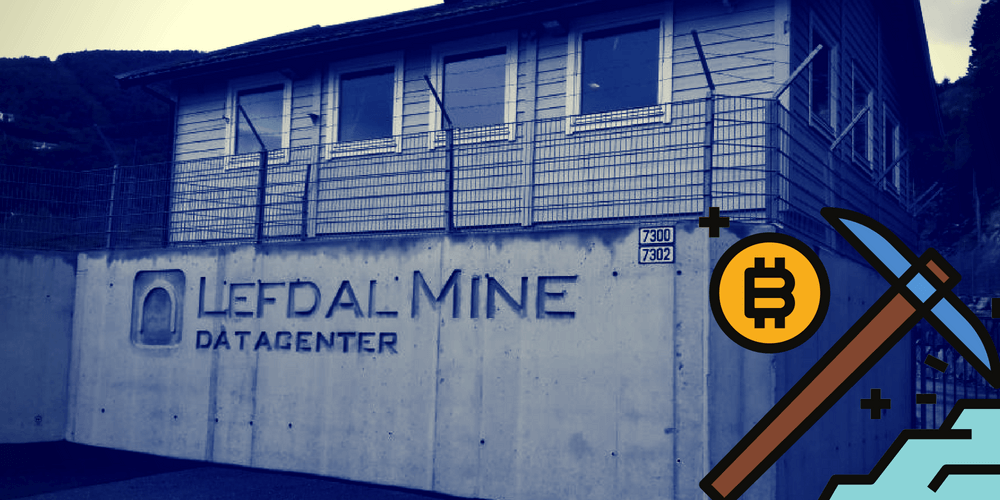 Where miners once stood to mine olivine, computer equipment has now taken centre stage.

Located in the fjords of Norway is a former olivine mineral mine that began its operations in the late 1970s. Fast-forward to the 21st century and that mine has been converted into an underground data centre for something different: Bitcoin mining that is efficient and sustainable.

Frankfurt-based Northern Bitcoin is the company behind the Lefdal Mine in Norway that is challenging the status quo of Bitcoin mining and redefining it. Founded in 2015, Northern Bitcoin is making sustainable infrastructure available to Bitcoin and the blockchain. In order to achieve this it operates a mining pool and its own mining hardware in the Lefdal Mine powered by renewable energies, under cost-effective and secure conditions.

And what better place to do this than a country that is surrounded by mountains, glaciers, and deep coastal fjords? With year-round cool temperatures and an excess of renewable energy available at reasonable prices, Norway is showing that it’s possible to mine for Bitcoin in a clean and CO2-neutral fashion.

Showing me around the Lefdal Mine, Mathis Schultz, CEO of Northern Bitcoin, explained that the mine is a substantial part of running a green Bitcoin infrastructure.

“In Norway we found the perfect conditions to mine Bitcoin emissions-free, environmentally-friendly and, therefore, sustainable,” he said to CoinJournal. “This is very important for us, as we are convinced that the future of Bitcoin is green.”

Schultz, a former banker, left his career in traditional finance to pursue Bitcoin. Comparing cryptocurrencies to the stock market, he told me a story about how a colleague wanted to know how they could purchase stocks at an exchange. After telling him how, the colleague came back a few days later, annoyed that he had to go through a lot of paperwork and then wait at least two weeks to get his trading account.

“Being used to trading Bitcoins and other cryptocurrencies on his mobile phone and within seconds without any intermediaries, he was deeply irritated about this insight and replied: ‘Trading stocks feels like playing Counter-Strike offline.’ For me, this statement is further proof that our financial system is going to need to change tremendously.”

Out of all the Nordic countries, Norway produces 97 per cent of its renewable energy through hydroelectric power. This is compared to Sweden, which creates 46 per cent, while Finland is pegged at 17 per cent.

With access to cheap, renewable energy, as well as operating in a country that has political and legal stability, Northern Bitcoin has chosen a prime location. Not only that, but the country has up to 6.7 terawatt hours (TWh) of excess renewable energy available. This puts electricity costs around €0.032 to €0.044/kWh, with a power usage efficiency ratio of 1.08.

One of the greatest debates around Bitcoin is the amount of energy it consumers to mine it. In January, the Guardian published an article with a somewhat sensationalised headline. Taking estimates from Digiconomist, it puts its energy consumption ahead of New Zealand and Hungary.

Yet, while it’s important to consider the energy that is being used for Bitcoin mining, topics on it are often one-sided. And it is these that are taken as fact when discussions surround climate change.

Speaking on the matter of Bitcoin’s energy use, Moritz Jäger, CTO of Northern Bitcoin, said that processing gold consumes 100 times the amount of energy than Bitcoin. Of course, while gold may be seen as having more value to a person, what about the energy used with payment processors?

In 2017, Bitcoin mining was pegged at consuming 30 TWh of energy; however, banking consumed a far greater amount, 100, as pointed out in a recent article penned by Katrina Kelly-Pitou, who studies clean energy technology at the University of Pittsburgh.

“It’s an ongoing process and it is slow and it is a serious issue, which can harm Bitcoin if the source of energy we are using comes from the wrong places,” stated Schultz. “As we’ve seen in China they rely on coal power plants and [are] using this valuable energy to provide transaction services to the Bitcoin network. Is this a good idea? Definitely not.”

Stepping into the Mine

Before entering the mine, a select group of journalists were met by Mats Andersson, the chief marketing officer of Lefdal Mine data center. After issuing security passes to us, we were driven down the spiral driveway deep into the mine, stopping at level two.

There are three levels currently in operation, which store containers for the IT equipment. In total, though, there are six subterranean levels with an area of 120,000m2 that can hold up to 1,500 container units.

Entering the widespread system of underground halls, streets, and chambers, averaging 100m deep in the mountain, one is instantly aware of the temperature. At a constant 9C, it becomes obvious that this mine is the ideal location for housing mining hardware. It’s also apparent that warm clothing is best suited for this excursion.

Located next to a 565m-deep Norwegian fjord and connected to four neighbouring glaciers, Northern Bitcoin uses hydroelectricity powered by 100 per cent renewable energy to run its mining operation. Taking the 8C water from the nearby fjord – available all year without limit – it cools the hardware from 30C to 18C. This drastically reduces the energy requirements for operating the hardware, reducing operating costs by up to 40 per cent compared to similar data centres.

The mine also boasts the highest security and is one of the safest data halls in the world. This is down to the fact that the massive overlying rock of the mountain is a natural shield against electromagnetic radiation.

In one avenue we are shown, Northern Bitcoin’s containers are stacked three high, each of which hold 210 ASICs. In addition to the mine’s naturally cool climate, the pipes have water pumped into them to cool the hardware down further. Averaging 8C when the water enters the pipes, it reenters the fjord at a pleasant 26C. This puts its water usage efficiency at the ideal value of zero as no water is consumed during the process. Not only is it sustainable, it’s also profitable.

When asked by a German reporter how low the price of Bitcoin would need to go before the company is affected, Schultz simply said: “very low.”

“The price of Bitcoin is a factor that affects our business,” he added to CoinJournal. “However, we act and operate in the long-term and the same applies to how we look at the price of Bitcoin. Besides, from a business perspective, a moderate Bitcoin price may facilitate operational activities.”

Having only been running its mining pool in Norway since the end of June, Northern Bitcoin has entered the next phase of its growth.

Until now, the company was itself part of a mining pool; however, since its mining capacity has grown it has created its own. The pool is set to open to external miners at the end of August, who will be able to participate in Northern Bitcoin’s mining pool in a number of ways such as contributing computing power – so-called hashrate – or their own hardware when it exceeds a certain size.

“As one of the very few mining pools worldwide, we support so-called “ASIC-Boost,” explained Jäger to CoinJournal. “Besides, we will promote miners who perform green sustainable mining. In addition, we will expand our own mining activities. Everything we focus on is to build a green Bitcoin to secure its future prosperity.”