Fintech investment in APAC has skyrocketed this year. Nearly US$3.5 billion has been invested so far; almost three times more than in 2014, according to a new report from Accenture.

According to Beat Monnerat, senior managing director at Accenture and the company’s lead in Asia-Pacific, fintech is “one of the hottest topics in financial services right now.”

“Financial institutions across Asia are trying to determine how best to connect into the fintech ecosystem,” Monnerat said. “Some are investing in companies, while others are creating incubators themselves or have paired up with partners.”

Jon Allaway, senior managing director of Accenture’s Financial Services group in ASEAN and executive sponsor of the Fintech Innovation Lab Asia-Pacific, isn’t surprised by the rapid increase of fintech investment in APAC and believes that the rise is due to the convergence of two trends. “Venture capitalists are clearly signaling fintech is a growth opportunity and simultaneously financial services companies are waking up to the vast opportunities created by the current wave of fintech,” he said in a statement. 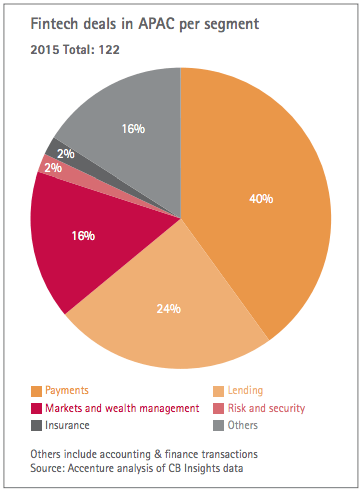 The report, which analyzes investment data from CB Insight, found that payments and lending have been the top two segments that have attracted the most deals in APAC in 2015 – 40% and 24% respectively -, followed by markets and wealth management (16%).

While banks need to be conscious of market-share dilution from competitors in the consumer and merchant payment and lending space, there are still untapped opportunities in B2B payments space, most particularly in trade and invoicing, Allaway said.

The report also found that an increasing number of non-traditional players have started investing in fintech startups. An example is Alibaba Group Holding and its finance arm Ant Financial Services Group, which made a “strategic investment” into Paytm, India’s largest mobile payment and commerce platform, in September.

‘Blockchain, cloud and cybersecurity are the next frontier’

According to Allaway, “financial services institutions are embracing cloud technology, mobile wallets and blockchain to fundamentally redefine their business and operational models.”

Hence, Accenture forecasts that investments in the bitcoin and blockchain space in Asia-Pacific will continue to grow.

Earlier this week, CNN reported that bitcoin and blockchain startups have attracted a record-breaking US$1 billion in investments so far.

Globally, US$461 million has been invested in 54 companies during the first nine months of 2015, the report claims.

“Although much of the blockchain focus has been on front-office applications, blockchain and similar distributed ledger technologies might soon play a role in the entire lifecycle of a trade, including clearing and settlement, collateral management, payments and reconciliation,” it says.

“We also expect distributed ledgers technologies to become a critical part of the backbone of future capital markets. This creates multiple opportunities for startups, so banks should pay close attention and have strategies in place for working these technologies into their development roadmaps.”

Finally, as consumers are demanding more digital services, financial services firms are faced with a few strategic options in order to become truly digital. These options being: build or acquire digital assets; or partner with third parties to access new technologies.

“As banks start to weave together their fintech threads – in payments, lending, data analysis, blockchain, etc – they have an opportunity to build and become the new platforms of tomorrow … and they should explore the innovations that startups are developing.”

Crypto lobby says stablecoins should not be subjected to new rules