In recent months, major financial institutions have warmed to Bitcoin, increasing coverage and providing increasingly positive information. In their latest report, Bank Of America revealed that the trading volume of Bitcoin has surpassed that of GLD, the biggest gold ETF in the market.

Digital Currency Group founder and CEO Barry Silbert tweeted in May 2016 that the total amount of gold in circulation was over $7 trillion.

Since then, bitcoin has exponentially grown, with the market cap rising from $8 billion to $42.6 billion in just over a year. Analysts have attributed the rising price of bitcoin to the increase in demand from casual and institutional investors, legalization of the digital currency by various countries including the U.S.A, South Korea, the Philippines, Japan and Australia, as well as an increase in mainstream adoption.

In response to the increasing price, Sheba Jafari, the head of technical strategy at Goldman Sachs, provided some technical analysis predicting that the price could reach $3,915 in the upcoming months and sustain an upward momentum.

While Bank of America and its analysts were reluctant to predict the short term price of bitcoin in their report, they noted that the daily trading volume of has surpassed that of GLD:

“It is hard to ignore that trading volumes for major digital currencies like bitcoin and ethereum have skyrocketed in recent years. For example, daily trading volumes for bitcoin were $400 million in 2012 and have now moved up to about $2 billion a day at present,”

Prior to the major correction that occurred last month, the combined market cap of cryptocurrencies in circulation surpassed 115$ billion. Furthermore, the daily trading volume of the market hit a high of $5.2 billion on the 13th of June as the demand for bitcoin and ethereum skyrocketed.

A chart provided by BoA and published by Zerohedge further revealed that the trading volume of GLD, the largest gold ETF, was significantly higher than that of bitcoin less than 8 months ago, maintaining a relatively high volume of daily trading throughout January 2014 to December 2016. However, during December of 2016, the trading volume of bitcoin took over that of GLD, as the demand towards gold decreased but interest in bitcoin surged. 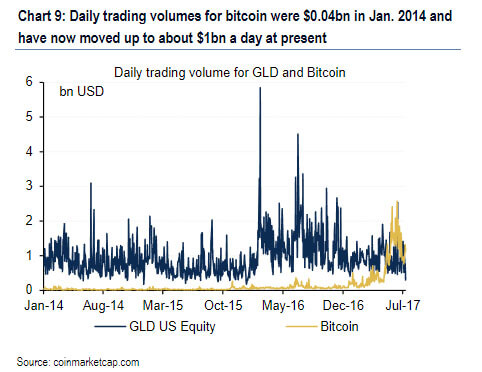 Additionally, the report from BoA emphasized the expansion of the cryptocurrency market in general, citing the growth rate of Ethereum and other public blockchain networks.

“Meanwhile, ethereum had daily trading volumes of $1.5mn when it first launched in 2015 and it is now experiencing daily trading of about $1bn. Most importantly, for a digital token to become a currency, it must build to a certain scale, a bit like the silver mine in Bolivia found by the Spanish. In some ways, this is exactly what has been happening in recent quarters, with the total market value of digital tokens growing exponentially from $1.5bn to around $87bn at present,”