Earlier this year, a connection between the relatively new bitcoin mining pool GBMiners and India-based, bitcoin-focused Ponzi scheme GainBitcoin was discovered by CoinJournal. The fallout from this discovery has now led to GBMiners’s software vendor, Darwin Labs, ending their relationship with the bitcoin mining pool. Back when the connection between GBMiners and GainBitcoin was first revealed, Darwin Labs CEO Sahil Baghla had no comment on the matter.

The connection between GBMiners and GainBitcoin is Amit Bhardwaj, who is the founder of GBMiners and is a key promoter of GainBitcoin. In addition to the GBMiners mining pool, Darwin Labs was also working with Bhardwaj on a bitcoin wallet, known as Coinbank; an investment fund, known as the Bitcoin Growth Fund; and Satoshi Studios, which is described as a blockchain incubator in southeast Asia.

It’s unclear if Darwin Labs was aware of the GainBitcoin Ponzi scheme while working with GBMiners and Bhardwaj. “It is our lack of understanding of the subject that led us to work for GBMiners as a software vendor without understanding their source of funds or their business model,” Baghla claimed in a recent post on LinkedIn.

No Further Relationship with GBMiners or Amit Bhardwaj

In an effort to clear the Darwin Labs name, Baghla has outlined the company’s severed relationship with GBMiners and Amit Bhardwaj in that recent post on LinkedIn.

“Darwin Labs, it’s founders or employees are not associated with GBMiners anymore, which implies we are not even their software vendors anymore,” wrote Baghla. “We have absolutely no commercial [or] professional relationship with GBMiners or Amit Bhardwaj at all.”

Baghla then clarified that Darwin Labs does not “wish to pass judgements on someone else’s way of working” and the reasoning behind the severed ties with Bhardwaj has to do with the negative press he has recently received.

“We are not fully aware of the workings of GainBitcoin or even the relationship between GainBitcoin and GBMiners,” Bhardwaj added later in the post.

While Baghla claims Darwin Labs is unclear of the relationship between GainBitcoin and GBMiners, there was clear video evidence of Bhardwaj (again, he’s the founder of GBMiners) touting GainBitcoin as an investment available on YouTube. The videos were deleted after the original investigative piece on GBMiners and GainBitcoin was published by CoinJournal. Backups were made before the CoinJournal article went live, and the videos can now be found on CoinJournal’s YouTube channel.

How Much Did Darwin Labs Know?

Although Darwin Labs has created blockchain incubator Satoshi Studios, they claim to not be experts in the area of bitcoin mining, which they point to as the reason for their involvement with Amit Bhardwaj.

“Bitcoin mining requires a special hardware which stores and validates the transaction in Bitcoin’s Blockchain,” wrote Baghla. “We are not subject experts on hardware operations involved in mining or its economic viability and have very little understanding of the matter.”

According to Baghla’s LinkedIn post, Satoshi Studios have returned the funds raised from Bhardwaj and other investors, and the project is now funded by Darwin Labs.

According to the Satoshi Studios website, well-known figures in the Bitcoin community, such as original Mt. Gox founder Jed McCaleb and BitAngels co-founder Michael Terpin, are still involved with the project as advisors

As mentioned previously, Darwin Labs also worked on the Bitcoin Growth Fund and Coinbank, which promises 1 percent returns per month on bitcoin deposits.

Update: In the original version of this article we linked to a Youtube channel containing the videos that were removed. Since publishing, these were removed due to a copyright take down notice. We have since added them to the site here 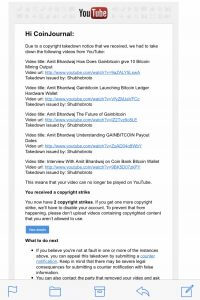