Home › Latest News › Blockai is a Blockchain Company With a Use

Nothing will replace filing your copyright with your country’s copyright office. I want to state that upfront because there has been some questioning of Blockai’s usefulness. Blockai, and other “alternative” copyright companies have a niche to fill in the marketplace of creative works.

In the internet economy a funny Meme can be as valuable as any piece of art. The court of public opinion is at least as important than the court of law. Because of those two realities, Blockai has a use not even the official Copyright Office can fill.

Blockai helps users protect their copyrights by allowing them to upload their works to the Blockai website and time stamping it. Using the internet to time stamp work is not a new concept, companies have been doing it since at least the early 2000s. Where Blockai differentiates itself is that it makes a record of the recording using the blockchain.

This is important because in the landscape of internet companies, there are far more failures than successes. There is no guarantee that Blockai or any other Copyright company will be around in a year or a decade.

Better Than a PMC

The recent questioning of Blockai’s value comes from a comparison to the Poor-Man’s-Copyright (PMC). The United Copyrights Office is relatively expensive and slow when it comes to processing a Copyright claim. The PMC is an urban legend of sorts. It claims than an author or artist can protect themselves from plagiarism and copyright infringements by mailing a copy of the work to themselves. The idea is that the sealed envelope will have a date from the post office. In a potential trial the copyright holder will then open the envelope in front of the jury and prove that they own the copyright.

There are a lot of problems with a PMC that make it unlikely to hold up in court. First, envelopes can be opened and resealed, any high school kid who has experience changing his report card can tell you that. Second, mailing something doesn’t prove you hold the copyright. You are not making a statement of ownership by mailing something. Finally, the delay in shipping causes the same time issues registering with the US Copyright Office has. In the internet age, plagiarism happens much quicker than it did in the days of ink and quills.

Here is how an online time-stamping service differs: It provides instant verification. You are explicitly stating at the time of the upload that you are the copyright holder. It is also much more difficult to falsify an online time-stamp than ink on an envelope.

But time-stamping services have their limitations as well. They haven’t been thoroughly tested in court and are dependent on the company that issues it. The company can disappear, as Numly apparently did sometime in 2015. You may also have to prove that the company is a reliable and trustworthy service in court.

By using the blockchain, and providing downloadable software that allows you to pull the certificate from the blockchain on your own, Blockai largely solves these problems. Explaining the blockchain to a court of law may be challenging for a lawyer but once that is accomplished, there is no denying that it has not been falsified. And it is also very likely that the blockchain will exist in some form, even if just archived, in perpetuity.

Putting something on Twitter or a similar site does provide a time-stamp and one likely to be just as trusted in the court of law as the blockchain, so there is that. But it then gets buried under a million tweets, timezone differences can cause arguments (even if solvable ones) and there have been cases of tweets disappearing. With blockchain recording, that will never be an issue.

Besides, there are the ancillary services Blockai offers. Blockai gives users a profile page with all of their copyrighted works on display. It searches the internet for you to see if anyone is infringing on your copyright. It is also not hard to imagine a future where Blockai serves as a marketplace for artists in addition to being a time-stamp service.

But if you really want to protect your work there is no substitute for an official copyright office. With that in mind, why use Blockai, or any time-stamping service at all? 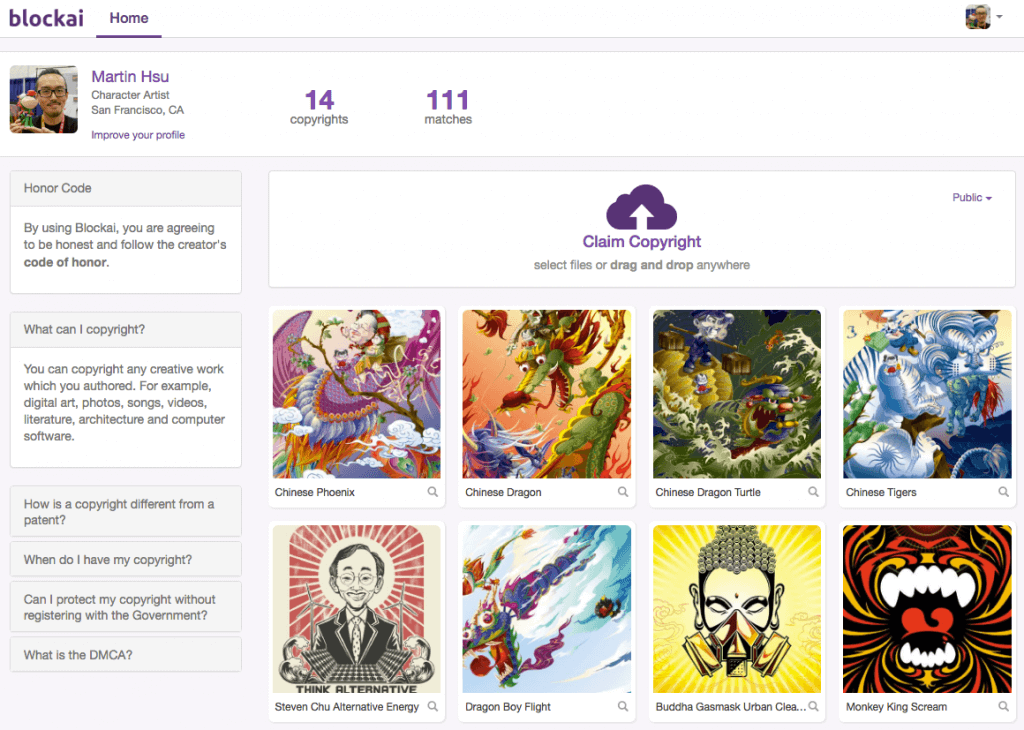 Built For The Internet Economy

Blockai goes far beyond simply protecting your work while you wait for the Copyright Office to file your claim. In the Internet micro-economy, small, short works not worthy of their own official copyright can, in aggregate, be worth a lot.

Consider the case of Josh Ostrovsky, better known as the Fat Jew. He gained millions of Twitter and Instagram followers. That led to endorsements, book deals, movie scripts, and a certain level of fame that millions of other Twitter and Instagram users can only aspire to. The problem was that Ostrovsky built his empire on a mountain of stolen jokes. He blamed it on interns. Then he said he was going to fix it. Then he said the whole thing was an important conversation for the internet.

Be that as it may, he still stole jokes. A lot of jokes. Enough jokes to make him a wealthy man while the people he stole the jokes from toiled in obscurity. It is questionable if memes and jokes are something you can legitimately copyright. But in the realm of public opinion, it doesn’t matter that Ostrovsky has not appeared in front of a court for copyright infringement. Public opinion matters in the internet economy where so many people are essentially selling themselves. Blockai makes your case for the public much stronger.

A service like Blockai can fill the gap between comprehensive works that should be protected by the United States Copyright Office (or similar) and the smaller works artists will still like credit for. Nearly everyone puts their own jokes online and a lot of people make a career out of it. Blockai can use the blockchain to protect those people, they don’t even have to know what a blockchain is. That is a larger market than most blockchain companies target and it actually does it more competently than the non blockchain businesses that currently serve that market.

“The average artist cares if people copy their work exactly and make money off of it. That surprisingly happens a lot. A copyright is an asset and most people don’t claim it or make money from it. […] We want to make something for the internet and make it as easy as possible for people to do the right thing.” said Blockai CEO and Co-Founder Nathan Lands

Blockai should be a company every bitcoin user points to as a demonstrable usecase for the blockchain. It shouldn’t be one we needlessly decry.