Venture capital investment into blockchain and Bitcoin companies has reached US$290 million in the first six months of the year through over 30 deals, according to a report by Juniper Research. More than a third of all investment was accounted for by three companies: Circle with its US$60 million Series D round; Blockstream, a US$55 million Series A; and Digital Asset Holdings, a US$60 million funding round. 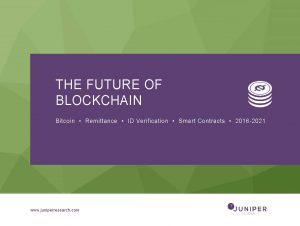 The document highlighted increasing diversification and interest in blockchain applications for use cases beyond financial services. These include digital identity, real estate and the Internet-of-Things.

Cross-border remittance in particular is viewed as an area where blockchain technology could have a profound impact, notably by allowing new entrants to offer services at significantly lower costs to customers. The total value of cross-border remittance in 2015 reached US$581 billion, of which US$431 billion was sent to emerging or developing economies, according to the World Bank.

Banks and financial institutions are more than ever involved in blockchain development with some of the world’s leading institutions having started trialing blockchain solutions and a number of them having already adopted the Ripple blockchain protocol. These include Santander, UniCredit, UBS, ReiseBank, CIBC, National Bank of Abu Dhabi, and ATB Financial.

“With blockchain technology able to significantly reduce the costs to the remitting organizations, the hope is that the savings enabled by this will be passed on to consumers and enable average prices at or below the 3% average price which the World Bank is targeting,” Juniper Research wrote in a separate whitepaper titled “Blockchain Reaction.”

The firm said that in areas such as transaction settlement, the introduction of blockchain-based system would substantially reduce both the risk of error and the time taken for verification and error checking.

This echoes another report by the World Economic Forum released last month claiming that distributed ledger technology has great potential to drive simplicity and efficiency.

“While blockchain technology offers the potential for increased speed, transparency and security across an array of verticals, there has to be rigorous and robust road-testing in each unique use case before any decision is taken.”

Smart contracts in particular should be coded properly. A poorly written code would make a smart contract susceptible to attacks, the report said, citing the recent case of The DAO hack as an example.

In June, The DAO, an ambitious project aimed at acting as an investment fund for early stage Ethereum projects that operates as a decentralized autonomous organization (DAO), was hacked out of US$60 million worth of ether.