This week will see the launch of a new and innovative project as The Knox group of companies launch their Bitcoin priced property venture. In a first for the industry, property will be available to buy directly from a developer using bitcoin. 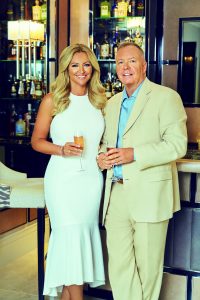 The £250 million venture is the first between entrepreneur and Conservative peer Baroness Michelle Mone OBE and businessman and philanthropist Douglas Barrowman, both of whom have had illustrious careers, founding and running several hugely successful businesses over the last 2 decades. Outside of The House of Lords, Baroness Mone is best known for founding the popular lingerie brand, Ultimo which she stepped down from in 2015, having sold her majority stake in the company.

Barrowman, the driving force behind The Knox group of companies has decades of experience investing in businesses and property, having begun his career working for international private equity firm 3i in the late 1980s.

Speaking to CoinJournal about the decision to offer the apartments exclusively in Bitcoin, Barrowman explained that he’d been following and investing in the space for 2 years, attracted originally by blockchain technology he now believes in the long-term success of Bitcoin

“I’ve been interested and invested in the sector for 2 years and I’ve also followed the blockchain story for a number of years, so have been a believer for a long time now so this isn’t something that I’ve just come across in the last couple of months. For me this was a logical extension of technology that I think will become mainstream in the next 3-5 years. We are enabling people who’ve made very good gains on bitcoin and other cryptocurrencies the opportunity to diversify back into mainstream investments such as bricks and mortar, rather than backing the next ICO or keeping it all in cryptocurrency. The apartments also have an 8% rental yield for those who choose to let them out.” 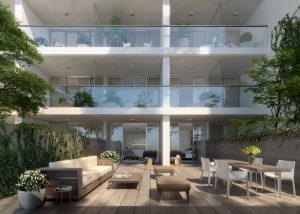 The one and two bedroom apartments are due for completion in 2019 and boast features including floor-to-ceiling windows with unobstructed views of the Dubai Hills and the city’s skyline. The complex was designed by renowned architects, John R Harris & Partners who contrasted bold architecture against relaxing, open communal areas which were designed by Michelle Mone interiors. As well as apartments, the development also includes three dedicated retail floors covering which will be home to restaurants, boutiques, and supermarkets. The luxurious towers also include space for several recreational amenities including an outside cinema, a huge pool area and a health and well-being center.

The company recognizes the importance of incentivizing the community and as such has made the new properties particularly attractive, offering them for sale 15-20% below market price with studio apartments starting at $133,000 USD (29.9 bitcoin at press time), rising to $379,000 USD (85.2 bitcoin at press time) for a 2 bedroom apartment.

“We understand that the community likes to be rewarded for early adoption so we are giving investors the opportunity to buy an apartment with bitcoin for 15-20% below the current asking price.”

Baroness Mone added that unlike other developments in the area, the apartments will come complete with all mod cons and that additional interior design services could also be paid for using bitcoin.

“Traditionally with developments in Dubai, you don’t get a kitchen or a bathroom. Ours include a beautiful kitchen and a beautiful bathroom. And if you want it completely interior designed, Michelle Mone interiors will also accept bitcoin.”

During our interview, Barrowman discussed his belief in the need for trust and transparency in the industry, explaining that though payments will be taken in Bitcoin, the remainder of the legal process of buying a property would be handled in a traditional and transparent way, reassuring users that the buying process was legitimate

“Bitpay will provide the processing of Bitcoin to Fiat currency which we need to pay suppliers, but the backend legal conveyancing will still be standard and transparent, so the community knows that the backend is a streamlined, legal process with everything registered properly”

When asked about whether holding at least part of the investment in bitcoin had been considered, Barrowman responded that while he feels that Bitcoin has long-term value, the price was still too volatile

“We are not currency speculators, we are here to build the towers, ensuring every penny is converted to fiat currency. Come November, with Segwit 2X the price may drop before it rebuilds again, so it would be risky for us to speculate when we are in the business of property development.”

In a press release, Stephen Pair, CEO of Bitpay who are processing payments for the development endorsed the project, championing the innovative approach to property purchasing

“These property purchases can now happen in minutes from anywhere in the world with the speed of sending an email. We are pleased to partner with Lady Michelle Mone OBE, Doug Barrowman, and the Knox Group of companies on this exciting opportunity for Bitcoin and for property payments.”

Properties are now available to view and purchase using bitcoin at https://www.astonplazacrypto.com/ and as an additional incentive, subject to 50 apartments being sold for bitcoin, one of the one-bedroom apartments from the development will be given away as the prize in a raffle, which buyers will automatically be entered into when they buy.

Quotes within this article were part of an interview and been edited for brevity and clarity.