While the US currently stands as the world leader in blockchain technology, China could very soon overshadow America in terms of blockchain development, according to PricewaterhouseCoopers (PwC).

A new survey conducted by the firm that examines the views of 600 executives in 15 countries found that the US (29%) is perceived as the most advanced country in developing blockchain projects, following by China (18%) and Australia (7%). However, within three to five years, respondents believe China will have overtaken the US (30%), shifting the early center of influence and activity from the US and Europe. 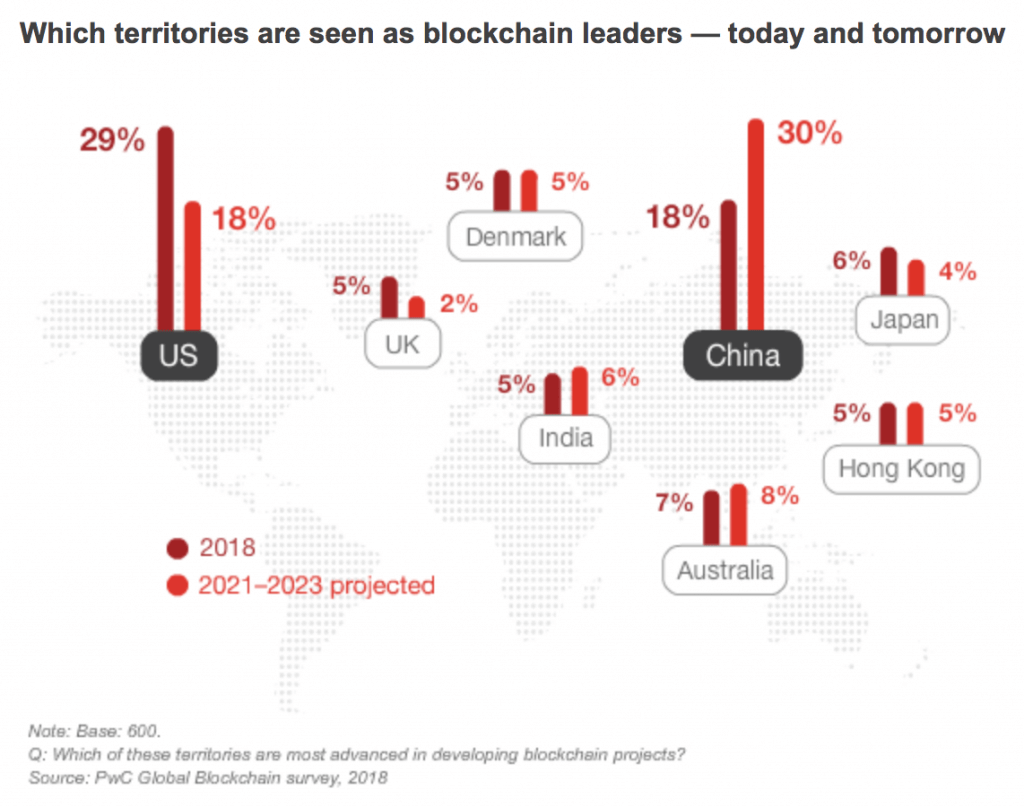 According to Manuel Martin, CEO and co-founder of Orvium, the new open source decentralized platform that aims to revolutionize the academic publishing sector, the US, China and Australia are closely followed by jurisdictions such as Japan, South Korea, Malta, Gibraltar, and Liechtenstein which have made big strides to become hotbeds for blockchain innovation.

Japan’s ministry of economy recently announced a blockchain-based data sharing platform for the trade industry, while South Korea has been driving promotion and expanding usage of blockchain in a multitude of ways including awareness programs and hackathons.

Malta approved a blockchain-friendly regulatory framework for distributed ledger technology, initial coin offerings (ICOs) and crypto assets in June, and Liechtenstein is currently working on the Blockchain Act, which would integrate current business models in regulatory terms in order to give companies and their clients legal certainty.

Findings from PwC’s 2018 Blockchain Survey suggest that companies around the world are serious about adopting blockchain technology despite regulatory uncertainty, which was identified as the biggest barrier to business adoption. Respondents noted that blockchain could open up many opportunities, including reduced costs, greater speed and more transparency and traceability. Gartner forecasts that blockchain will generate an annual business value of more than US$3 trillion by 2030.

“What business executives tell us is that no-one wants to be left behind by blockchain, even if at this early stage of its development, concerns on trust and regulation remain,” said Steve Davies, blockchain leader at PwC.

“A well-designed blockchain doesn’t just cut out intermediaries, it reduces costs, increases speed, reach, transparency and traceability for many business processes. The business case can be compelling, if organizations understand what their end game is in using the technology, and match that to their design.”

An overwhelming 84% say their organizations have at least some involvement with blockchain technology, but only a quarter of these (25%) actually have fully live blockchain implementations or pilot projects running.

Companies including Amazon, Microsoft and Facebook are exploring use cases for the technology. Facebook announced in May the launch of a new team dedicated to blockchain led by David Marcus, a former board member of Coinbase.

But for Shiv Malik, head of strategy and communications at blockchain-backed data platform Streamr, blockchain has yet to deliver on the hype.

“People are both over and underestimating the change blockchain will have on their particular vertical,” Malik said.

“There has been plenty of hype and investment in the last few years about the potential of blockchain but the tangible results of those investments are yet to procure world changing applications – certainly not outside of fintech.”