The Bitcoin Cash Civil War just got a lot more heated. Roger Ver, the owner of Bitcoin.com and one of the largest figures in Bitcoin Cash has shown an email allegedly from Craig Wright. In the email, Wright threatens to break Bitcoin Cash, preventing all trading for two years bringing its value down to zero.

The email came after Bitcoin.com indicated that it will support the Bitcoin Cash ABC chain promoted by Jihan Wu and Bitmain. Wright, who is best known for failing to prove he is Satoshi Nakamoto, wants to avoid a hardfork that will upgrade the Bitcoin Cash system.

Wright disagrees with the scaling solutions proposed by Bitcoin ABC, particularly the expanding of Bitcoin Cash’s scripts through DSV. He has been working on his own client that won’t support those upgrades and instead has its own upgrades including a blocksize increase to 128MB.

Regardless of one’s opinion on the proposed upgrades or the two individuals involved, the email is quite shocking.

I will do 2 years of no trade. Nothing.

In the war, no coin can trade.

If you want ABC, you want shitcoins, welcome to bankruptcy.

It was nice knowing you.

Bitcoin will die before ABC shits on it. I will see BCH trade at 0 for a few years. Will you?

Side with ABC, you hate bitcoin, you are my enemy. You have fucking no idea what that means.

I AM Satoshi. Have a nice life. You will now discover me when pissed off.

And, no. You Could have had proof. Your choice. 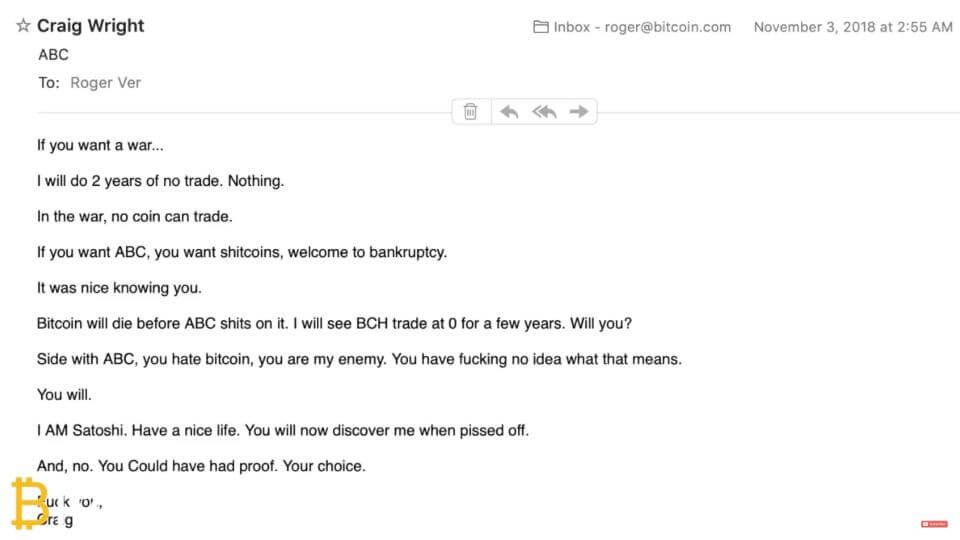 Ver revealed the screenshot of the alleged email in a video posted to Bitcoin.com’s official YouTube account.

Ver went onto say that he supports the idea of minority groups moving off of chains and starting their own, so he has no issue with Wright’s Bitcoin SV. However, in the event that two incompatible chains are created on the hardfork date of November 15th, Ver wants Bitcoin.com users to be protected.

He further explained by recapping the Ethereum Classic (ETC) fork that occurred a few years ago. That was the first major coin to hardfork into two separate chains. Exchanges weren’t prepared for the new chain and loss thousands of Ethereum Classic coins that should have gone to their customers. Because most exchanges don’t differentiate between user coins, bad actors were able to take advantage. They sent ETH coins to exchanges and would then withdraw them. Since they weren’t the same coins they withdrew, they were able to split those coins and take the ETC associated with them. Then they could send ETH to the exchange again, withdraw them again and get a whole new set of ETC.

As much as I have disagreed with and have had fun at the expense of Ver in the past, this seems like the only responsible position to take. But Wright seems to see any support of the ABC client to be tantamount to betrayal of his true vision of Bitcoin.

Craig Wright has not officially commented on the email itself, and since Ver only shared a screenshot, we have yet to independently verify it. We have reached out to Ver for verifiable confirmation. That said, it seems very much in line with Craig Wright’s recent tweets, in which he laid out his plan to destroy Bitcoin ABC, even if it means hounding the last user running the software. 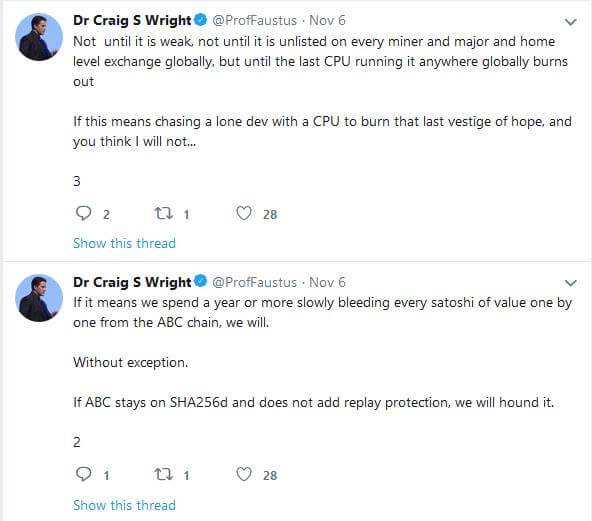 Later, he accused Ver and Wu of promoting child pornography and drug trafficking with their planned updates for Bitcoin ABC. 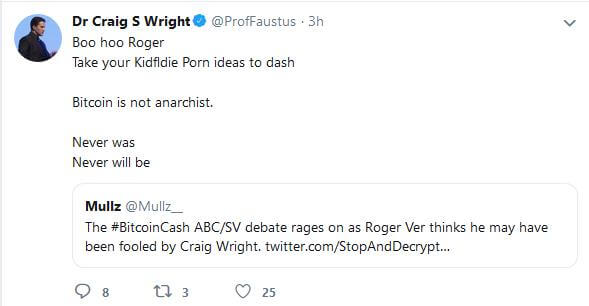 It is not clear how Craig Wright will try to destroy Bitcoin ABC. Seemingly, he would need to keep more than 51% of the hashrate on both Bitcoin ABC and Bitcoin SV if they split. While Wright and his allies at CoinGeek currently hold a significant amount of hashing power, it doesn’t appear to be enough to take over the chain. They currently hold about 37% of the total hashing power on Bitcoin Cash, according to Coin.dance. 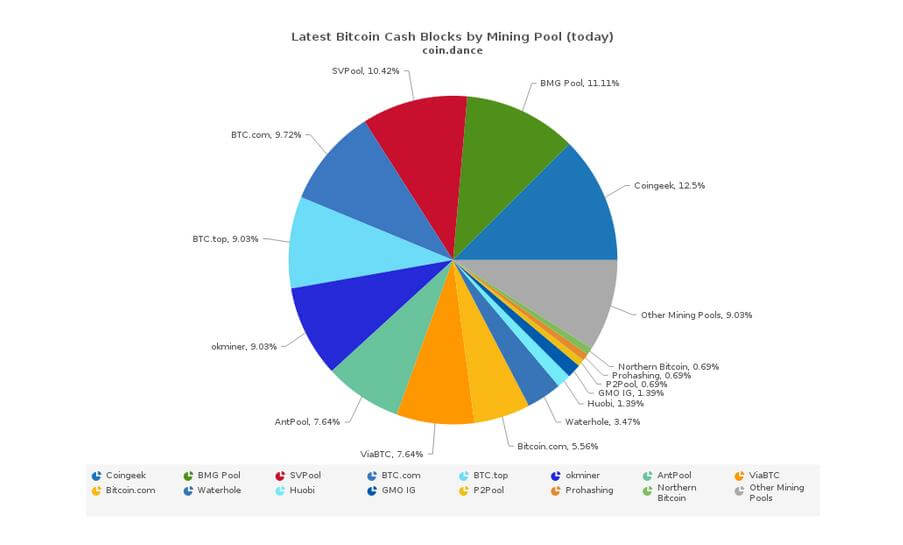 SVPool, BMG Pool and Coingeek are the pools known to support Wright’s plan.

But that number is tenuous at best. Even if the leaders of the Coingeek pool want to mine on BitcoinSV, there is no guarantee that its individual miners won’t switch to a different pool if they find one that is more stable and profitable. It is also worth noting that Bitmain could bring significantly more hashing power onto the BCH chain from its BTC pool, if it chooses to.

Trustnodes.com has a great write up on how they see the potential Bitcoin Cash fork going down.

While the result is not set in stone (and Wright has even claimed to have some tricks up his sleeve) what is clear is that there is a fracture in the Bitcoin Cash community. Ver is arguably the man most responsible for the original Bitcoin/Bitcoin Cash fork, and now he has his own Bitcoin Cash fork to deal with. In his video, he admitted that he now understands why some in the Bitcoin community were against a contentious hard fork. He ponders how many merchants and other ancillary services are waiting until after the fork to support Bitcoin Cash. He should also be concerned about its impact on its long-term reputation as a relatively stable and safe coin.

Ver advises his viewers to put their Bitcoin Cash into a wallet in which they control the keys before the hardfork takes place. That is always good advice but is extra important during a contentious hardfork as it is the only way for users to ensure they will be able to access both versions of their coins, should two versions exist after the hardfork.

We will continue to monitor the Bitcoin Cash Fork/Civil War.