[Edit: Unconfirmed reports are also surfacing that Cryptsy’s UNO wallet has been drained into Bittrex. We are investigating that now.]

Paul Vernon, the disgraced owner of closed exchange Cryptsy started a new exchange out of China, it has been confirmed by a representative of that exchange. The same representative claims Paul Vernon is not involved with the exchange now, but evidence seems to suggest otherwise.

The site, BiteBi9 originally had a design similar to Cryptsy. A former Cryptsy developer, admitted to working on the site, though the developer was unable to confirm or deny Cryptsy’s ownership of the site. The site was registered by someone using an email with the @projectinvestors.com domain. Paul Vernon is the founder and CEO of projectinvestors.com and is still listed as the owner of its register. 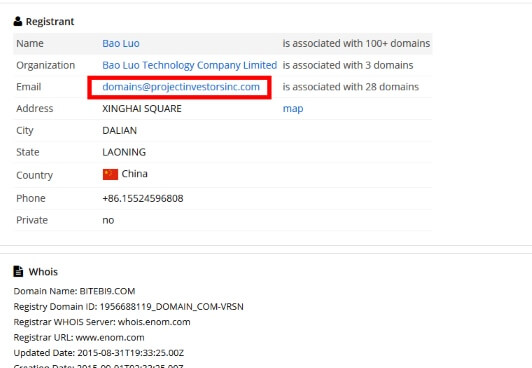 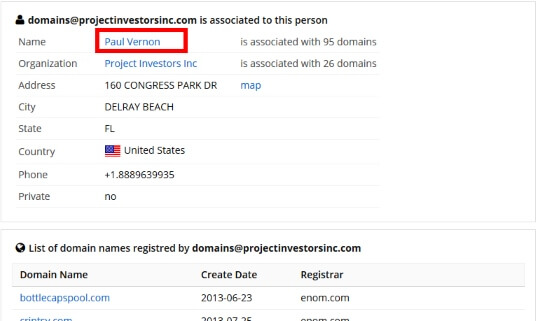 The site was also registered in Dalian, in the Laoning province of China, the same city that reports pointed to when they stated that Vernon was in China.

Furthermore, early users of BiteBi9 sent support tickets and they claim they were sent emails that were copied from Cryptsy’s support emails word for word and had the same IP address as Cryptsy emails from the same time period. We have seen DKIM-signed emails confirming this but we are not publishing them to keep the identity of our source safe.

After some of these details were exposed on the Cryptsy forum on Bitcointalk, the whois domain name registration changed, however some sites still show the older information. The timing of the change, right after being mentioned on Bitcointalk, is curious.

Marshall Long, the CEO of Final Hash, which had various dealings with Cryptsy over the years, mentioned a move to China in an interview with Trace Mayer.

“We also just recently signed some contracts to move a rather large exchange to China. That’s an exchange called Cryptsy. So, they’re expanding to China to kind of serve this under-served population that’s, you know, a billion and a half people that are hungry for something.”

It is unclear what Long’s connection with Cryptsy and Bitebi9 is now. For a short time, he was credited as being the CTO of Cryptsy. We reached out to Long through his company’s support page, but couldn’t find a current personal email for him. 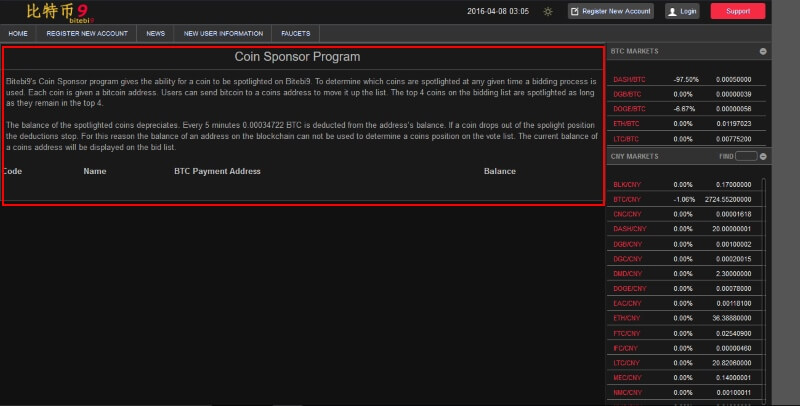 As are some of its coin descriptions: 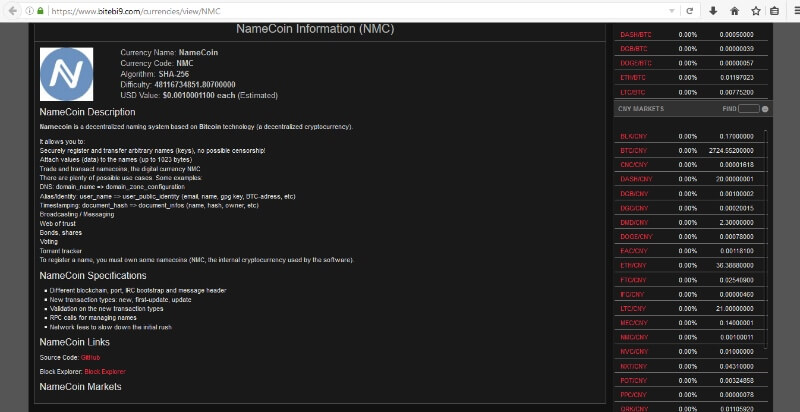 The two sites still share some code as well. 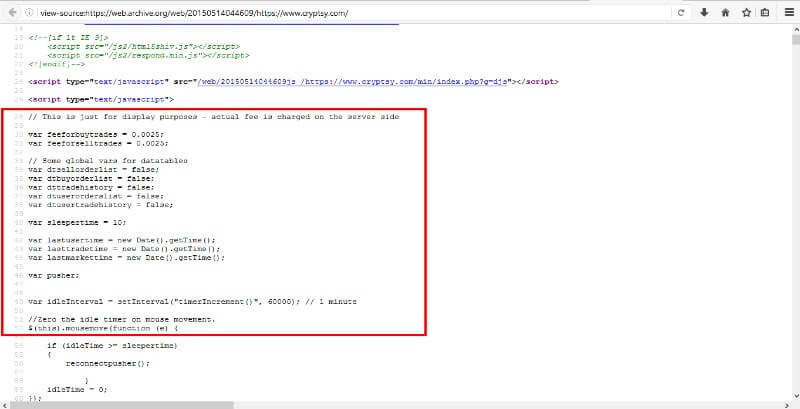 The site was registered by“Bao Luo Technology Company Ltd.” Bao Luo in Pinyin (the romanization of Chinese writing) translates to Paul. Which brings us to the the Chinese government company registry for Bao Luo Technology Company Ltd. The company was registered to start operations on July 28th, 2015. Earlier that month, the Cryptsy cold wallet came to life and sent 350BTC to BTCC in two transactions, presumably to be turned into Chinese Yuan. Cryptsy had a 100BTC withdraw limit at that time, so it had to be performed by someone with access to Cryptsy’s systems. It could have been the alleged hacker Vern blamed, but 16 days later Bao Luo Dalian Technology Company was registered for a price of 300,000 Yuan, or about $46,000. The time between when Bitcoin was sent from the Cryptsy wallet to BTCC  and the company’s registration was a volatile time for bitcoin, with the price fluctuated between $230 and $310, which makes the value of those two transactions between $80,500 – $108,500 (roughly 520,550 – 701,620 Yuan). More than enough to develop and register the exchange.

Cryptsy also developers mentioned that they were developing an exchange in China ([start at 46:00] Horus is a “legitimate agent” of Cryptsy, according to Vern.) 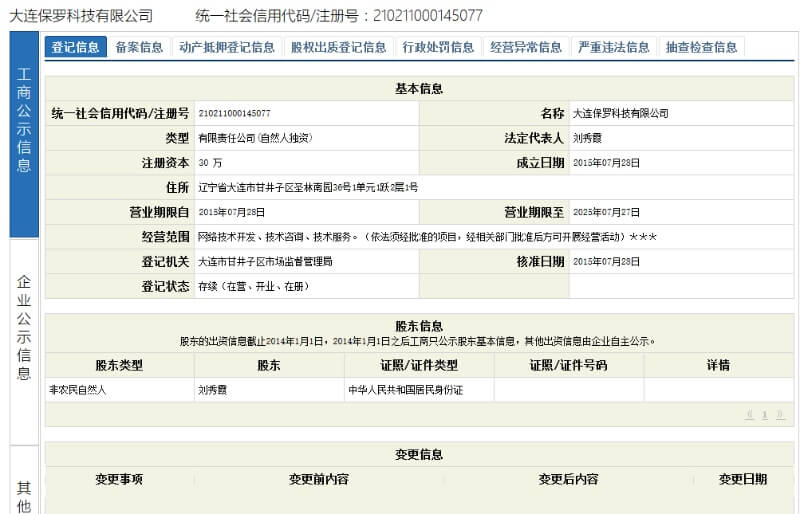 The google translation of the above text is rough but the indicates that the company is “Paul [Bao Luo] Dalian Technology Co., Ltd” that it is located in Dalian and was registered by a “Liu Xiuxia” who the document indicates a Chinese national. During divorce proceedings, Vernon’s ex-wife indicated that at least one of Vernon’s businesses reside in China and that he was having an extra-martial affair with someone there.  She also asked that the court take his passport, because she feared he would flee the country.
Recent court documents, first reported by CoinDesk, indicate that Vernon’s Florida assets were seized. In those documents the court mentions that it was unable to serve Vernon with a subpoena. One possible reason for that could be that they are not aware of his current location.

It is technically possible that Vernon simply started the site for Chinese clients before handing it over to them. However, every piece of evidence seems to indicate otherwise. Starting with the Marshall Long comments that Cryptsy was expanding there and ending with the Chinese registration that indicates he started the company. His wife’s comments and legal maneuvers during the divorce proceedings, the mysterious movements from Cryptsy’s wallets to BTCC, and that the exchange was registered in the same city we last saw Vern online all add to the mounting evidence that Cryptsy and Bitebi9 are connected in a more significant fashion than its launch. We have contacted both Paul Vernon and Bitebi9’s support page. Vernon did not respond, but Bitebi9 sent us this response in Chinese:

Translated, this email states that Vernon was involved in the creation of the exchange but is not the current owner. They say more information will be provided about the owner on the site at a later date. Looking at the sites current Whois information, “Xiuxia Liu” registered the site. According to the Google Translation of the Chinese company registration documents, “Liu Xiuxia” is the owner of Paul [Bao Luo] Dalian Technologies, the same Paul Dalian Technologies that was registered shortly after Cryptsy sent funds to BTCC and the same company that registered Bitebi9 using Vernon’s @projectinvestors.com email.

Cryptsy was once one of the Internet’s largest Bitcoin and altcoin exchanges. It claimed to have lost 13,000 bitcoins and 300,000 Litecoins in a hack. Those claims have been questioned, as Cryptsy wallets for other altcoins have since been drained and numerous reports contradicted their story. Cryptsy claimed an article by former bitcoin outlet Coinfire caused a bank run on the site, after Coinfire reported that the exchange was under investigation by federal investigators.

Paul Vernon doesn’t appear to be laying low.  China is a very large place, one where it is easy to disappear into the anonymity afforded by 1.3 billion people, even for a Westerner.  But it is also a very harsh place. It will only take one person with enough Guanxi to bring the full force of the Chinese government down on him. At that point, we may see extradition to the United States, or a much harsher punishment.

Or maybe his hot streak of fleecing people’s coins will continue.

Much of the evidence in this article was originally uncovered by a variety of great bitcointalk.org sleuths. As always, thanks to them.