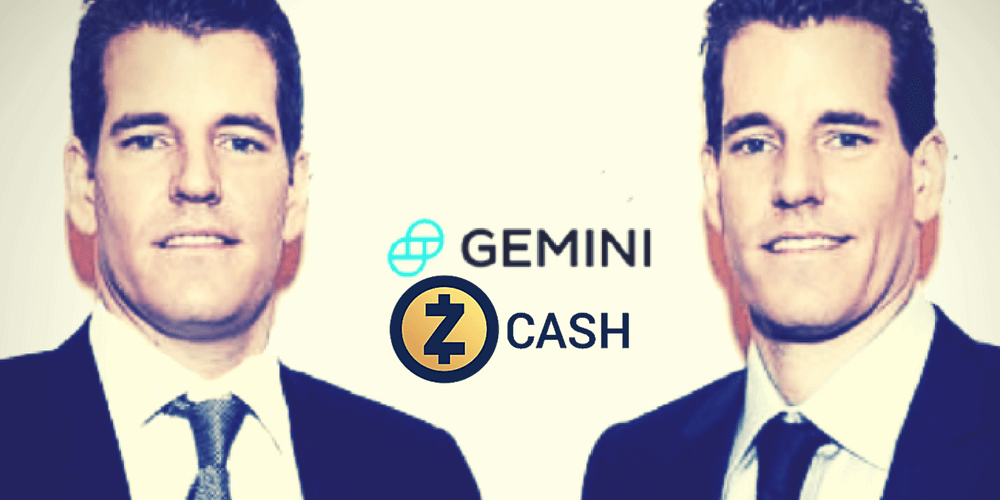 The regulated US-exchange from the Winklevoss brothers has announced support for ZCash (ZEC), which will begin trading from May 22nd, with deposits accepted a few days earlier from the 19th.

In a blog update outlining the announcement, VP of Technology at Gemini, Eric Winer, is upfront about their work engaging with the New York State Department of Financial Services (NYSDFS), stating that as a result of this interaction, Gemini will be the first properly licensed ZCash exchange in the world where you can safely purchase ZEC.

Gemini are one of a number of US exchanges taking an open approach to engaging with regulatory bodies within the country. Unlike some of their contemporaries, the exchange appeared to respond positively to the latest requests for information from New York Attorney General Eric Schneiderman, with a statement from CEO Tyler Winklevoss indicating that they “continue to embrace thoughtful regulation and collaboration on our mission to help build the future of money.”

ZCash is a cryptocurrency which is essentially the active implementation of a protocol known as Zerocash. The Zerocash protocol extends upon the foundations of Bitcoin, and employs novel cryptographic functions known as ZK-SNARKs to create private and anonymous transactions which are currently not an option with Bitcoin. ZK-SNARKs are a form of zero-knowledge proof, wherein the validity of a statement, such as a transaction, can be cryptographically proven, without knowledge of the inputs. Transaction privacy and its implications for fungibility have been an important topic of debate over the years, and much research has been undertaken in this area since the introduction of Bitcoin in 2009.

This latest announcement is particularly interesting, as many within the cryptocurrency space have long predicted that privacy coins will fall foul of regulators due to their enhanced anonymity and the potential risks this may pose from an AML/KYC perspective. This appears to fly in the face of this idea, with the NYSDFS appearing happy to become the first regulatory agency to supervise a privacy-focussed cryptocurrency.