There are many countries today that still don’t have a currency of their own including Ecuador and Marshall Islands. Many of them are small countries that can’t afford expensive printed FIAT currency management.

The emergence of sovereign cryptocurrencies has presented a new way for countries to be currency independent and form a new identity as a key player in the sophisticated digital economy. For this reason, the mission to implement digitized currency on the blockchain – also referred to as ‘sovereign cryptocurrencies’ – has become the goal for many of these countries’ central banks and governments.

In fact, countries like China, England, Russia, Japan, Sweden, Australia, Netherlands, Singapore, India and others have all been seen to be testing their blockchain-based cryptocurrencies.

Ecuador seems to have been ahead of the pack in this department when it became the first country to roll out its own government back digital currency. Ecuador’s Sistema de Dinero Electrónico (electronic money system), hosted the first-ever state-run electronic payment system in the world.

For other countries, cities or nations striving to do the same, it takes more than just the flipping the switch off from fiat to crypto cryptocurrency. In Ecuador’s case, their journey began in 2000 when the country of 16 million people ditched their stumbling currency for the U.S. dollar so they had no option but to look for an alternative solution to their currency problem.

Countries need to be serious in developing a new crypto economy around their own cryptocurrency for long-term sustainability. Simply creating currency and selling that as a digital asset/commodity to global citizens through ICO or exchanges won’t create their own crypto economy.  The process for cryptocurrencies to be on its way to be a global reality can be accelerated with careful consideration of five key elements that glue us together to create an economy: 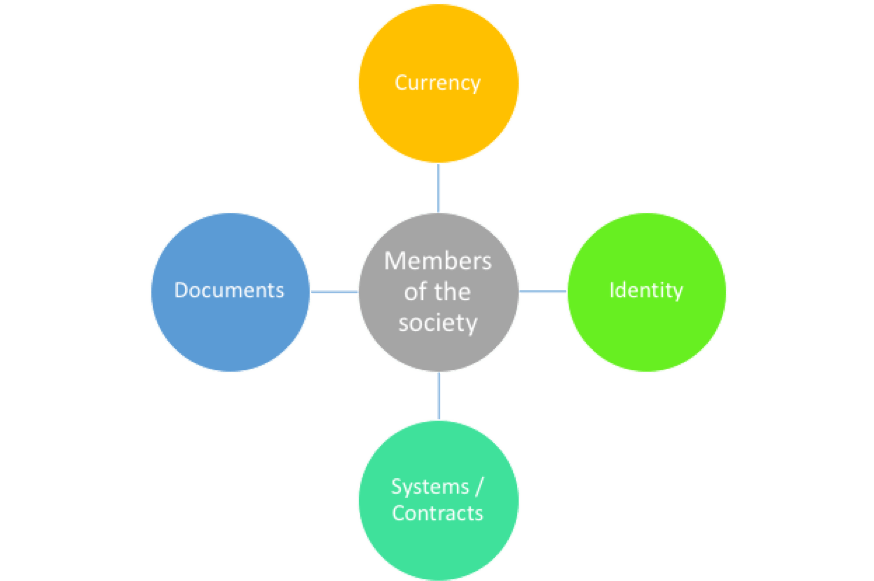 Key members such as government, citizens, visitors, banks, entrepreneurs, software developers, schools, and hospitals all make up a well-functioning society. The needs and requirements of these players should take the lead in navigating the rollout of a sovereign cryptocurrency because they make up identity management and systems.

It’s vital for governments or companies issuing sovereign digital currencies to consider what their citizens need in their daily lives. This involves basic tasks like buying groceries, paying rent and paying other utility bills. Let’s face it, if citizens are unable to carry out basic tasks like paying for their lunch in sovereign cryptocurrencies, then that will defeat the purpose of issuing it.

Governments and central banks today spend a lot of money on paper currency printing,  regulation, usage and sometimes even the burning of that cash. Sovereign cryptocurrencies can eradicate all the administrative costs and processes that come with paper money, but that does it is not as easy to implement as it sounds.

Organisations who want to issue sovereign cryptocurrencies need to decide how they want to structure it. This means considering what the processes are, how they generated, circulated and stored.

Let’s take Chandler city located southeast of Phoenix Arizona an example. If the city council would like to issue a Chandler coin, as long as they are issued on an Ethereum network, they could list on an exchange. However to circulate such a currency is a complex task. Blockchain technology software development will be the best solution to help governments with cryptocurrency generation, circulation, storage, usage and burning.

Identification is the most important factor for individuals or businesses. Traditional identity process can be integrated with blockchain based identity management to make it more secured. An easy to use Identity API, which can be customized for this purpose will help with this process.

Using blockchain technology, existing and new documents can be managed easily and securely. Systems can be put in place to generate, distribute, store, authorize and even shred documents.

Distributed web technology will enable these systems, however, this has to be developed for the purposes of storing and tracing documents.

Again to implement a system like this can be costly and time-consuming. All governments need is a blockchain technology software development kit that they can simply implement.

Scanners, Bar/QR code readers, mobile or web applications, existing IT systems are used to process day-to-day transactions of members. These devices and systems should be enhanced to handle blockchain based transactions via APIs and Smart Contracts.

Even with the basic daily activity of going to a grocery store, a person is exposed to all these systems. Let’s take buying milk for example, when someone goes to pay for the grocery item they need to scan the barcode on the milk carton and then take out their credit or card to pay via the card machine, which has sensors to take their payment. In this case, the payment processing part can be enhanced with the use of cryptocurrencies. It can be faster and more efficient both for the merchant and the customer to transfer payments.

Taking these five elements into consideration in the rollout of a sovereign cryptocurrency, governments need make sure they’re creating a crypto economy that is as open source as it can be. They should use existing and popular blockchains because they are proven to be more scalable. Essentially they would need to engage a developer community who can develop apps for the government at no cost.

It’s not recommended for governments to create their own blockchain because it defeats the purpose of having a cryptocurrency, which becomes expensive to manage in the long run. The best way to start is to create a sovereign currency and making it as stable coin that has low volatility. Users can eventually convert their existing FIAT to crypto. From there, the government can encourage basic financial transactions such as sending, receiving, storing, buying, selling and paying bills with cryptocurrency. Once all the systems and applications are in place for citizens to perform these transactions then the only thing that’s left is to educate users on how sovereign cryptocurrencies work. Education is the most challenging part, but this should become easier over time.