Shares of Eastman Kodak Company jumped 125% following news that the former camera and film giant was venturing into the cryptocurrency and blockchain space. 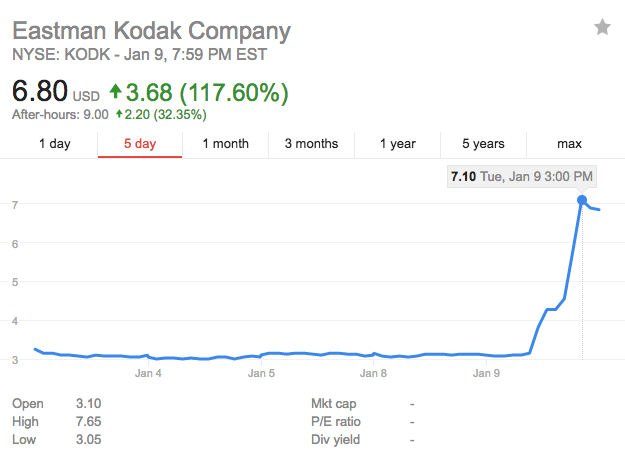 Kodak and strategic partner WENN Digital announced on Tuesday that they were developing a blockchain-based called KodakOne for image rights management and its cryptocurrency called KodakCoin. A token sale is scheduled to begin on January 31, 2018 and will be open to accredited investors from the US, UK, Canada and other selected countries, the company said.

“For many in the tech industry, ‘blockchain’ and ‘cryptocurrency’ are hot buzzwords, but for photographers who’ve long struggled to assert control over their work and how it’s used, these buzzwords are the keys to solving what felt like an unsolvable problem,” said Kodak CEO Jeff Clarke. “Kodak has always sought to democratize photography and make licensing fair to artists. These technologies give the photography community an innovative and easy way to do just that.”

The company said the platform will provide continual web crawling to monitor and detect unlicensed usage of images registered in the KodakOne system.

The Kodak licensee said customers would pay up-front to rent mining capacity. An upfront payment of US$3,400 for a two-year contract would lead to Bitcoin production value of around US$375 per month at current bitcoin value.

Kodak said it is looking to install rows of Bitcoin mining rigs at its headquarters in Rochester, New York.

As interest in cryptocurrencies and ICOs mushrooms, an increasing number of companies outside of the blockchain space are looking to tap into the cryptocraze.

Encrypted messaging startup Telegram is planning to launch its own blockchain platform and native cryptocurrency which would power payments on its chat app and beyond.

Sources told TechCrunch that the Telegram Open Network (TON) would be a new, “third generation” blockchain with “superior capabilities.” The launch will be funded with an ICO with a private pre-sale ranging into the hundreds of millions of dollars.

FTX’s failure is not a harbinger of crypto: Gavin Wood