Most crypto-fans never thought they’d live to see a day when bitcoin reached its true pinnacle of financial stability, but it appears that moment has come, as the digital currency now sits proudly beyond the $4,000 mark. It’s good news for those who never lost hope. It’s also a sign that anyone who doubted the digital currency’s power should open their eyes a bit wider next time.

The road to this point has been rocky, to say the least. Problems stemmed back in early 2014, when following the Mt. Gox debacle, bitcoin lost nearly half its value overnight. Things continued to fall apart from there as bitcoin dropped to $500, $400, then less than $200 in early 2015. For the most part, faith in bitcoin was slowing fast, and the question regarding how much longer it would survive seemed to have a definitive answer…

But then something strange began to occur. By the end of 2015, bitcoin was experiencing a relaxed, yet almost steady increase. Jumps into the $300 range were instilling a sense of courage and enthusiasm among those who depended on bitcoin to get them through the day. By mid-2016, things jumped even further, bringing bitcoin back to $400, and by the end of the year, the currency was experiencing newfound popularity as it darted past the $700 mark. It seemed like the sky was the limit, and now, even the sky can’t seem to keep bitcoin in its place. Standing above $4,000, bitcoin is the hot financial product of the year, maybe even the decade, and how much further it will go is a story worth reading.

Current predictions claim that bitcoin will likely reach $5,000 by the end of the year, and at the rate it’s going, that wouldn’t be a surprise. Current hypotheses regarding bitcoin’s speedy run tend to vary, with one suggestion coming from digital currency author Chris Burniske. He believes that prolonged and extensive searches of “bitcoin” on Google may be adding to its growing price, though this is largely open to speculation. The information comes by way of Google Trends, which may not bear as strong an influence as one might think. 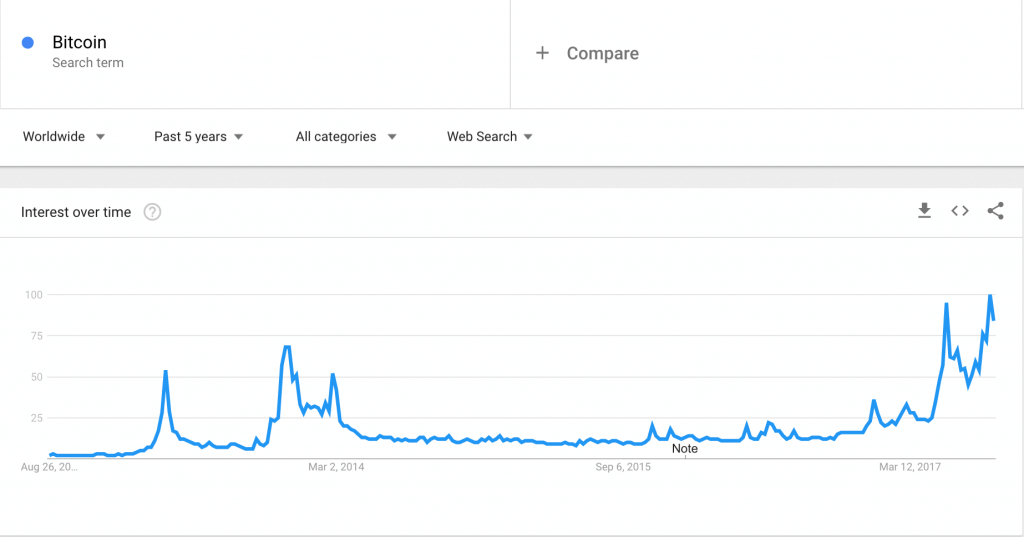 Other ideas include bitcoin’s fork (and the fact that it survived), political strife, strengthening investor interest, and its growing familiarity amongst the public. This is a big one, as just a short time ago, many Americans freely admitted they had no idea bitcoin or digital currency even existed.

One source suggests rising popularity in Japan as the primary instigator of bitcoin’s incessant jumps. Trading between yen and bitcoin platforms is at an all-time high, and Asia has certainly helped in getting bitcoin’s name out there for the world to see…

But as a writer who’s been covering bitcoin for some time, I think there’s only one reason as to why bitcoin is surging beyond anyone’s expectations… Necessity! People need bitcoin – in both developing and developed nations alike, and that need is growing stronger than ever.

In the United States for example, bitcoin’s popularity as a remittance source has jumped ever since Donald Trump moved into the White House. The threats of deportation against illegal immigrants are higher than they ever were during Obama’s time as president. Immigrant arrests are up nearly 40 percent, and many undocumented workers are arguably looking at bitcoin as the way to keep themselves and their families steady should they ever be forced to return home.

The U.S. dollar has also lost some of its weight over the years, as have the yuan and several other national currencies. Inflation has plagued the world – also, things like the housing market in America may be showing signs of recovery since the days of the Great Recession, but many still cannot gain access to respectable domiciles. Cities are overcrowded, large families are living in small apartments, and most of the country’s population has virtually no access to housing loans. Why, you ask? The answer is simple… The money isn’t always available. Whether this is due to credit reasons, unstable job histories or simply not making enough, money hasn’t proved accessible to everyone.

This has birthed distrust between the American public and the financial sector. Regardless of how you want to put it, the almighty dollar doesn’t seem to be working for everybody – least of all, middle and lower-class citizens, and money has proven difficult to attain in many instances. If people cannot make enough, they cannot purchase what they need to survive.

Even things like stocks have somehow lost their significance. This is partially because many residents don’t have access to the investment education they need to make smart decisions, but the up-and-down game that stocks have been playing over the last ten years is making many citizens nervous, and unwilling to step in when they should. Companies continue to close their doors across the landscape, making any stock investment a risky (and sometimes dangerous) move that becomes even more sweat-inducing depending on how much money one ultimately invests in a specific enterprise.

But as bitcoin’s mainstream status continues to swell, people are beginning to recognize the notions that have long stood behind it. As a stronghold against financial crises, political turmoil and other hard-hitting problems that so many citizens are facing today, the digital currency has managed to stand its ground, and thus garner even more popularity and confidence amongst ordinary people. It can be said that eventually, the trust and dependency so many have on bitcoin will indeed reach global scales, thereby turning into a global currency that can destroy the financial blockades existing between counties. Business can therefore be easier, while present limitations on transactions will vanish into oblivion, giving everyone their rightful passage towards financial freedom.

Necessity and trust… That’s what we are seeing in today’s financial market amongst bitcoin users, and this may be the true reason as to why its value continues to grow, even after so many rough patches. National currencies are failing their citizens, while bitcoin gives everyone an equal opportunity to protect themselves and access the doorways to their financial futures. As this trust and necessity grows, bitcoin will continue to rank higher and higher amongst both fans and strangers, making it one of the most powerful financial entities of the modern era.