There are trillions of dollars worth of capital not being used. Or rather, they are being used so ineffectively that they might as well not be used. Capital tied up in the supply chain and slowed by the ancient fiat system results in a lot of waiting, borrowing and general ineffective use. Sweetbridge thinks they can fix that, but only if regulators let them.

The financial regulatory system in the United States is a hodgepodge of different state regulations, federal regulators and red tape that is preventing financial innovation that could free up untold capital and reinvigorate our economy.

Sweetbridge CEO Scott Nelson went to Capital Hill for a Chatham House Rules enforced meeting on financial regulations in regards to blockchain technology. I talked to him afterwards at a quiet capital city bar and he did not seem to come away optimistic about the future of blockchain innovation in the United States.

“There is a financial war going on, a war for capital” he explained “and America is losing. They don’t even know it is happening.”

What he is referring to isn’t the type of war fought with bombs. He isn’t even talking about a trade war, the type of which our current president seems determined to involve us in. What Nelson means when he says there is a financial war, is one for the wallets and bank accounts of everyone from multi billion dollar companies to individual consumers. The war of commerce.

The United States has a few significant advantages in this war, even as it is oblivious to its existence. We remain, for a little while longer anyway, the largest economy in the world. We have vast amounts of disposable income. And this enables us to demand certain concessions for companies that wish to sell in America. If you want access to our markets, you have to play by our rules. Traditionally this would have meant dealing with tariffs and taxes, but tariffs fell out of favor during the William Taft administration in the first decade of the 1900s.

What it means today is: If you want access to our markets, you have to put up with arguably the worst financial regulations in the developed world. If you want to do something in Europe that requires a financial license, you need just one for the entirety of the European Union. That’s 27 nations, with all their different regions, markets and borders, with just one permit. In the United States, you need 49 different permits to be a Money Transfer Business, Nearly one for every state.

Those hurdles are worth overcoming for businesses because of our large economy, but that advantage is won’t be around forever. As Nelson noted in our interview “money follows the path of least resistance.”

Sweetbridge is one of those rare blockchain companies with a easily identifiable use case, especially if you understand the basics of international supply chains. While IBM and other companies are focused on using the blockchain to track food products as they go from point A to B all the way to Z, there is potentially a more disruptive opportunity for blockchain within the supply chain space.

As mentioned in the opening paragraph of this piece, there are trillions, with a “T” in capital tied up in supply chain management at any time. 3.9 Trillion to be exact, according to Sweetbridge. They want to open up that capital by using a blockchain and two different tokens.

A company making an international deal today has to deal with a lot of issues. Primarily, waiting to get paid. The money has to go through different banks and networks before finally getting to them. They also have to wait for the products, if they aren’t digital, to be physically shipped to their destination.

Meanwhile, that company presumably has other orders to fill, payroll to meet and rent to pay. That means they have to borrow money, either from themselves or a bank at a high interest rate. That means less capital to go into investment and ultimately, a hamstrung economy.

Using Sweetbridge, participants would be able to use their tokens to borrow at single digit interest rates. In the previous example the supplier would send off their products, enter into a smart contract and borrow money against it. When the product arrives, the receiver would complete the contract, the supplier’s funds would be released and they would be able to pay back their loan, all of it much quicker that going through the traditional money corridors and cheaper than borrowing from a bank.

The meeting that Nelson went to was under Chatham House Rules, meaning that participants can talk about attending and what was talked about, but not who specifically was there. We also know that Representatives Jared Polis and David Schweikert were likely there, because they are a part of the Congressional Blockchain Caucus, designed to promote favorable regulations for blockchain technologies.

Its not that Nelson thinks there should be no regulation at all. Even as an owner of an ICO, he admits that there are some scams in the space. But it is less about the amount of regulation (though that is an issue itself) and more about the type of regulations.

Beyond dealing with the 49 different state regulations, crypto-creators also have to deal with different regulatory bodies. The SEC, the FTC possibly the DOJ and others. The frustrating thing for innovators is the complexity and opaqueness they have to deal with. If it was straight forward or if there was only one permit nationwide, that would go a long way.

Scott Nelson introduced me to the concept of sponsoring, where one company that already has the necessary permits can vouch for a company they are working with. If the vouched for company abuses the permit, then its the permitted company that is on the hook. This creates a level of self-policing that allows for innovation but still protects customers and investors.

I constantly hear about clarity being needed in regulation. I hear it from the SEC, I hear it from ICO runners and altcoin creators and app developers. But that clarity hasn’t been created yet because our byzantine government is unable to create it. The mess is too muddled and interests too many.

And it is too old too. Both in the way of the system itself and the majority of the people running it. It is a few months old now, but the video of Congress interviewing Mark Zuckerberg should be on the forefront of the mind of anyone concerned about cryptocurrency regulation. These fogies have no idea what is going on.

Despite the idea being around for half a dozen years and actual DApps being in use for years now, regulators haven’t even started to consider systems that they can’t shut down. The concept is probably completely foreign to them. They are used to taking their pitbulls, the law enforcement branches of the FBI and DEA and pointing them at a target. “Go close down the Silk Road.” “Find out what Mark Karpeles is doing.” “Arrest people on Localbitcoins.com.”

These are simple solutions to what Congress likely sees as a simple problem. There is a person or service facilitating illegal activity, or participating it in themselves, so shut it down. But with DApps it won’t be that simple and it is concerning that they, according to Nelson, don’t seem to be thinking about it at all.

What happens when that road comes to a head? What happens where there is a decentralized drug marketplace, some Chuck Schumer type demands it be shut down, and the DEA’s response is it is impossible?

Will DApps be banned? Will internet traffic be monitored for signs of DApps use? Will PSAs play on TV, warning parents that their kids could be “Dappers”? Will there be a red scare type campaign to rid the country of DApps? 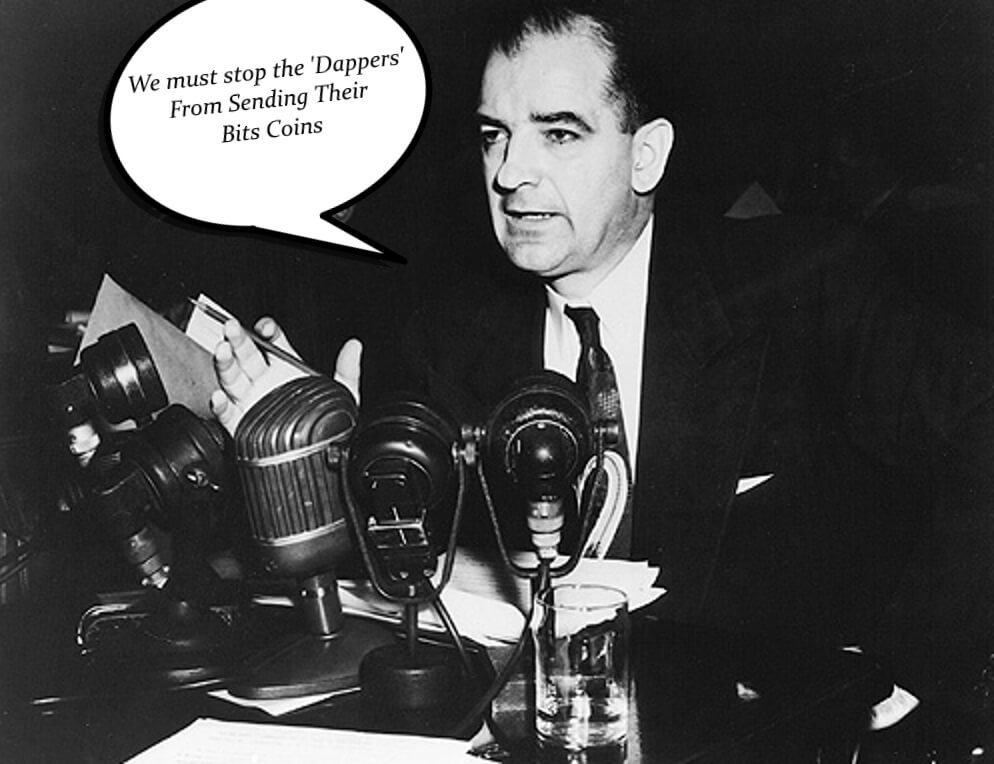 There are dozens of attempted regulation I can imagine them trying, but none of them would actually prevent DApps. Most of them will hurt not only innovation but individuals as well.

It is getting to the point where any hope for reasonable and clear regulation is quickly being extinguished. “The blockchain space is evolving at a pace like we’ve never seen.” Explained Nelson “I just don’t see how any regulatory structure is going be to be able to keep up with that change.”

And that’s a problem. In a space with technologies that have the potential to overhaul and super charge our economy, falling behind can be disastrous. If we don’t court Cryptoinnovators, another country will and we might lose our “largest economy” status even quicker than we assume we will.

3.9 Trillion dollars in capital are waiting to be opened up by SweetBridge. If we want our part of it, we need to get our act together.