Anyone who has been following bitcoin for the past three years is likely familiar with the Ross Ulbricht case. Accused and convicted of running the deep web marketplace The Silk Road, Ulbricht was sentenced to life in prison without parole. The FreeRoss campaign is giving supporters a chance to reveal artwork that Ulbricht drew in prison and possibly win physical gold.

There are many questionable issues surrounding the case, including the fact that two of the key investigators in the case plead guilty to charges relating to misconduct and corruption while investigating the Silk Road.

In addition to questions about the validity of the government’s evidence gathering methods, Ulbricht’s sentence was much harsher than expected.

The Ulbricht case, like any high profile legal case, has a chance to set precedent. It could lower the bar of evidence needed for a conviction, significantly gut the fourth and first amendments, and have far reaching effects for internet users worldwide.

Even if Ulbricht’s tragic story doesn’t pull on your heart strings, the idea of the government being able to use a “general warrant” to search every piece of electronic storage you have with no specific goal in mind, should send chills down your spine. That is just one precedent that could be set if Ulbricht’s conviction is allowed to stand.

Yesterday, Ross’ mother Lyn Ulbricht and the rest of the FreeRoss.org movement, announced a campaign to raise money for the appeals process. While sitting in prison Ross Ulbricht drew a piece of art titled “The Trial I Saw”. Users can donate a dollar to reveal a small piece of the artwork, while leaving a message, eventually revealing the art in its entirety. The header image above this article is that artwork in the process of being revealed. FreeRoss.org accepts bitcoin along with other donation methods.

In addition, there are bits of gold hidden in the picture. Pick the right pixel and you could win a special one gram gold bar (retail value $51). The gold was donated by Roberts & Roberts.

The next step in the case is May 26th, when the government issues its rebuttal on the case. The Electronic Frontier Foundation (EFF), Law Enforcement Against Prohibition (LEAP), and the Drug Policy Alliance have all recently joined the brief on Ulbricht’s side.

In case you are reading this after the artwork has been fully revealed, you can always donate to Ulbricht’s defense fund using the QR code below. 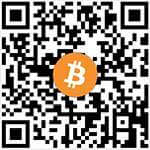