[Note: Moments before publishing this article, we found this article on SiliconAngle from last month that already warned readers about this scam. SatoshiNews also wrote about them. However, since we added more evidence and the scam remains active online, we decided to still publish of the article.]

A former bitcoin scam, previously exposed by CryptoCoinNews, known as BTCFlap.com appears to have resurfaced, as a new site bringing the same offer and using the same sentences, word for word, has popped up. That site, called Minerscenter.com is offering the same deal as BTCFlap and is very likely perpetuating the same scam of using stolen Paypal accounts to buy bitcoin at above rate value. Those Paypal funds are almost always returned to the legitimate Paypal account holder but, as bitcoin transactions can’t be reversed, any bitcoin sent will be lost.

I see Bitcoin scams everyday. Most of them are relatively small and are regulated to the spam folder of my gmail account. Many ones are too small to mention because giving them press might even be counter-productive to the goal of making sure as few people as possible get scammed trying to invest in or otherwise buy bitcoin for the first time. But at the same time, I do have a desire to stop scams before they make an impact, and before they damage bitcoin’s reputation. The SEC says Garza and GAW Miners scammed more than 10,000 people. We don’t know how many of those people were turned off of cryptocurrencies forever because of that experience but we can be sure at least some of them were.

While fishing for a story and a slow news day, I came across a press release that was sent to the normal places where you can pay to have press releases put out, Yahoo Finance, MarketWired and others. Ironically, CryptoCoinNews would later publish and then retract a post about it. The Press Release varied slightly from site to site but told the same story every time. A “well established” bitcoin company based out of Delaware was offering the elusive Bitcoin to Paypal transfers, and the icing on the cake was that they are, for a limited time, buying bitcoin at (depending on the particular press release) 10-12% above market rates.

They then go on to make vague allusions to a secret business plan and a desire to help the bitcoin community. They also claimed to have already purchased between 15,000 and 17,000 BTC and sometimes there was an anecdote added in by the CEO about how some customers wasted their time by sending silly “test” transactions first.

I consider myself to somewhat have my pulse on the community and I had never heard of MinersCenter, and their business plan, if you can call it that, closely resembled what had often been regulated to my spam folder. The problem was, this wasn’t my spam folder, this was Marketwired and Yahoo Finance. Most people understand those sites are legitimately for paid Press Releases, but other people put a lot of faith in those sites and assume they wouldn’t publish a press release of a blatant scam.

Buying bitcoin for above market rates would never be sustainable for any legitimate business. People would continually sell bitcoin to the company and then immediately buy it back before selling it again until the company’s funds were drained. If I told you I would buy unlimited candy bars for $2.50 and I stood next to a store that had unlimited candy bars and sold them for $2.00, you would be able to continually buy candy bars at the store and sell them to me until I was exhausted of funds. MinersCenter claims to be doing the internet equivalent of that.

So, I decided to look into the site. Besides the general absurdity of buying bitcoins at 10% above market value, my next hint that something was amiss was their alleged business certificate.  It was a certificate from the City of Chicago, but the address of the business was in Wilmington, DE.  Later, a company rep would tell me that they recently moved from Chicago to Wilmington, but that doesn’t explain why the city of Chicago would be issuing a license, a “finance” license no less, to a company that was residing four states and 753 miles away (by car), even if the company resided in Chicago recently. 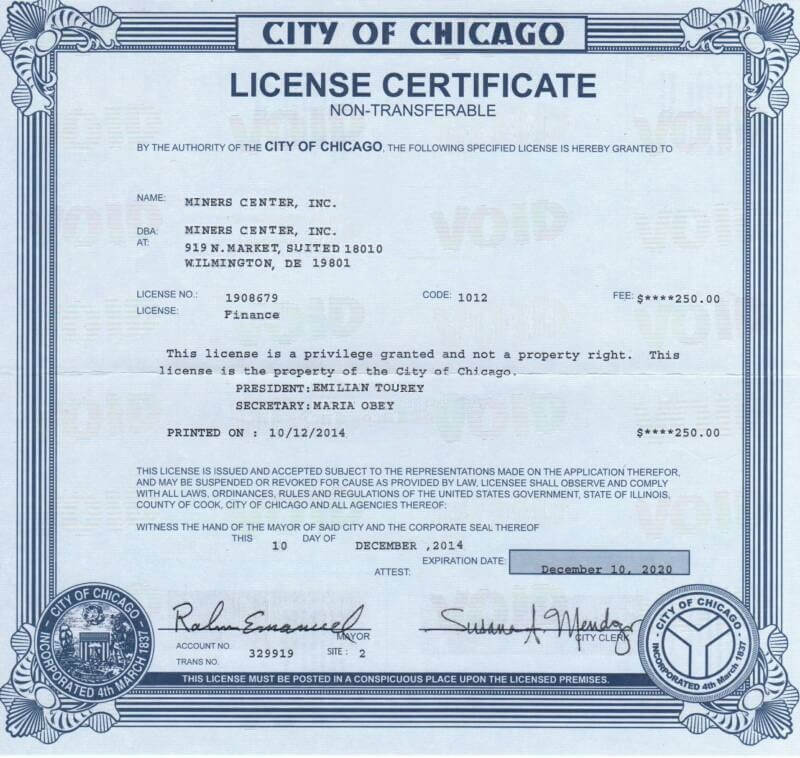 Looking deeper, more warning signs became apparent. According to Google maps its stated street address of “919 N.Market Suited [sic]” doesn’t exist in the city of Wilmington Delaware, nor does any street named N.Market or North Market or even Market St.

I searched Google for “Chicago Business Licenses” and found this one, from 2011, that looked remarkably similar. 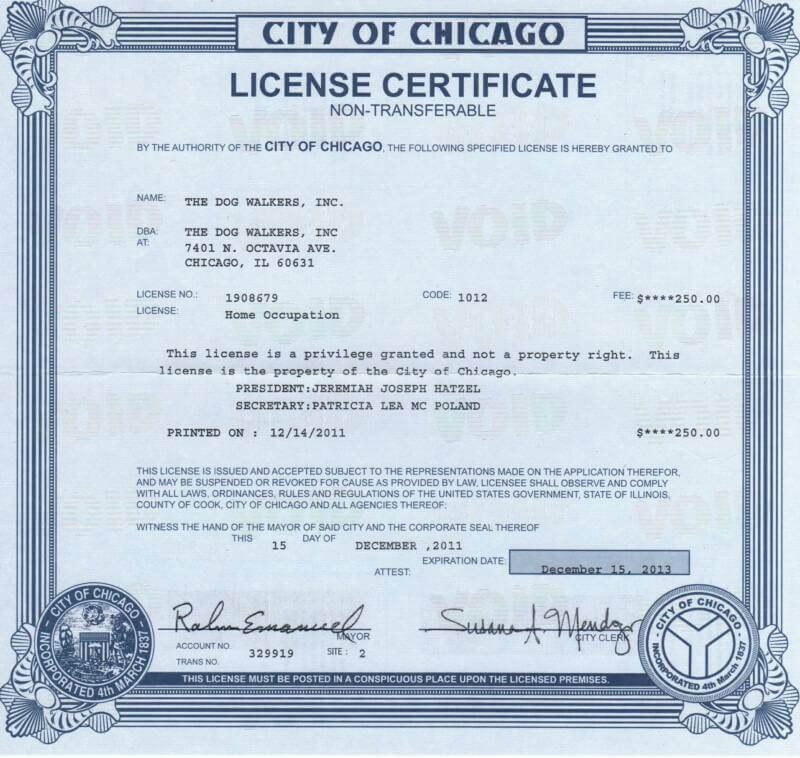 The version not from MinersCenter.com is for a dog walking company residing in Chicago. What seems to be the more likely fake: The one that wants to walk your dog and exists in the same city as the issuing body, or the one that wants you to send them money and supposedly exists in an entirely different state?

I Google searched the name on the document, Emilian Tourey, surely the CEO of a “well established” Bitcoin company would have something online about themselves. Apparently I am not the first person to notice this scam. A reader posted a comment in the article on BTCFlap from CCN, alleging that BTCFlap had continued their scam as Minerscenter.com.

So I headed to  to BTCFlap’s archive.org page to see what similarities I could find, and there were more than I could have expected. Both BTCFlap.com and MinersCenter.com had a minimum deposit of 0.2BTC and a maximum of 450BTC, but more damning, MinersCenter had apparently lifted entire sentences from the long-defunct BTCFlap.com site, a site that had gone offline long before MinersCenter came online according to Whois.com. [Note: links to MinersCenter instead go to an Archive.org version of the site, to help readers avoid any contact with the alleged scammers and to not increase their SEO rank]

We spoke to a Customer service representative during and before the investigation, and their responses were strange, including reminding me that they had my IP address. They eventually redirected my questions to their CEO, who I have sent an email to and am waiting for a response.

I thought about calling the City Clerk of Chicago, and asking if they issue business certificates for finance companies in Delaware and give them the same case and account number as a dog walking business, but that didn’t seem necessary. Regardless of their supposed “CEOs” denials, if they bother issuing them, this group is likely the same group that ran BTCFlap. The scam is the same and that they have lifted entire sentences from a site that went defunct before their new site went online all but proves it.

What is concerning is that while their tactics were still laughably bad, the group did improve from their last attempt. Their website is sightly more professional looking, their grammar is still bad but not as egregious, and they at least attempted to appear legitimate by posting the modified business certificate and putting out press releases on popular sites.

The press release is a big deal, as it was key in their representative’s attempt to convince me that the business was legitimate. Sites like Marketwired and the press release section of Yahoo Finance never claim to do any vetting of the releases posted there. However, readers don’t necessarily know that. It would not be unreasonable for someone who is not well-versed on the way news is distributed to think that those companies wouldn’t allow blatant scams on their site, but they (apparently) don’t see even the most basic vetting process as part of their responsibility. It seems like they would be willing to run a press release asking people to join a family in the California desert, if Mr. Manson pays them enough money. 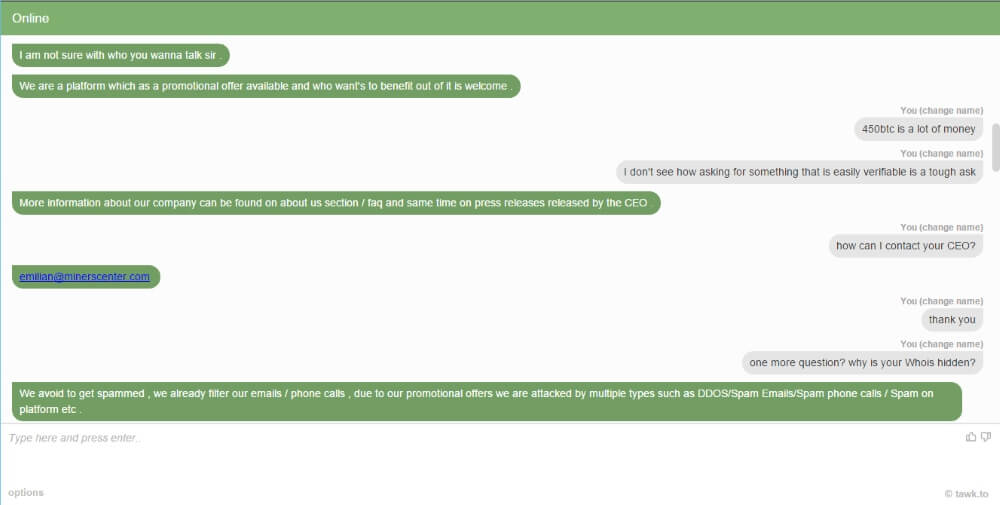 We have contacted MarketWired asking what their policy is on publishing PRs from alleged scam sites and are awaiting their response. Yahoo Finance’s policy page indicates that they publish press releases based off of other popular press release sites.

As P.H. Madore pointed out in his original article on BTCFlap, the harm these sites do go much deeper than the individuals directly affected. It is easy to blame the victim but the likely victims are the people new to Bitcoin that are unaware of how common scams are. It only takes one person to get scammed, then they tell their friends and family and suddenly 10 or 15 people are turned off of bitcoin because of one victim.

As Madore said, it isn’t difficult to see how that could result in a negative network effect. While the BTCFlap/MinersCenter scam has not been nearly as sophisticated or as damaging as something like Paypal, it is something we should act quickly to nip in the bud, especially since they have advanced to publishing PRs on popular sites and forging business certificates.

When looking at the site through archive.org some scripts become available and it reveals their bitcoin address: 163P3J3zHXsgura8oQX8M2aM2cx3Rv51Te which has had 152.15 BTC pass through it at press time, including 0.3 BTC today. While we don’t know how much of that is actual scamming and how much of it is the owner recycling the same coins to make the address seem more legitimate, it is clear that the scam is still active, ongoing, and perhaps even successful.