Home › Latest News › Six.network is Aiming to Reinvent the Digital and Creative Economies

In 2016, the entire digital economy contributed 15.5 per cent of total global GDP, or $11.5 trillion. This was mainly driven by the increasing usage of a consumer-driven Internet.

Yet, the digital economy rises partly due to creative workers. It is these workers who produce creative content for digital and creative companies, including bloggers, filmmakers, movie artists, broadcasters, photographers, and advertisers, to name a few.

Research from Ernst & Young from 2015 found that the culture and creative industries (CCI) generated $2,250 billion of revenue, or 3 per cent of the world’s GDP, creating 29.5 million jobs worldwide. The biggest contributors were television ($477 million), visual arts ($391 million), newspapers and magazines ($354 million), and advertising ($285 million).

Notably, though, it is often the contractors that are left out of pocket. Figures from the Association for Independent Professionals (IPSE) and The Freelancer Club found last year that freelancers working in the creative industries lose £5,394 per year by working for free.

In order to solve these issues, a platform is aiming to reinvent the digital and creative economies by providing a decentralised solution for all types of transactions. By using blockchain technology and smart contracts it is hoping to build a better infrastructure.

The Six.network was born from the alliance of businesses in the digital marketing and creative industries to solve problems afflicting upstream (creative workers), midstream (agencies), and downstream (audiences) players in the supply chain. 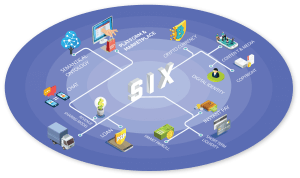 According to the platform’s white paper these problems include “high transaction costs, low financial liquidity of middlemen and creative workers, [the] inability to liquidise digital assets, content distribution with unclear ownership rights, and unfairness of income distribution.”

The Six.network is a joint venture between Ookbee U, Yello Digital Marketing, and Computerlogy, which are a group of companies based in Thailand and Korea. Through its SIX Digital Asset Wallet, decentralised financial services, and wallet-to-wallet (W2W) decentralised commerce, the Six.network is aiming to create an “ecosystem that is fair, transparent, secured, efficient, and sustainable for all players in the digital and creative supply chains.”

The digital asset wallet is more than just a wallet for cryptocurrencies, according to the platform. Accordingly, it is the one place for a user to store, connect, and commerce all digital assets in a decentralised fashion. This includes storing digital assets beyond just cryptocurrencies. These include blockchain-based digital assets, ranging from creators assets (film, music, digital content) and digital copyrights to digital loans, payrolls, and even loyalty and reward tokens.

The wallet also enables users to directly connect with one another thereby removing control from centralised platform providers who take a significant portion of supply chain profits. Additionally, users can sell their work directly from the digital asset wallet, which, according to the network, would see producers, aggregators, and streaming app providers to plug into the decentralised ecosystem and use smart contracts to pass the copyrights and revenue sharing flow to each other, thus connecting creators with end users.

“SIX.network’s goal is to set a global standard for digital assets that allow machines to talk among themselves, leading to an automated and transparent marketplace on the blockchain,” the team said.

By Q4 2018, the platform is aiming to deliver a decentralized financial-services proof of concept to real businesses and creative workers. Eventually, the goal is that creative workers will be able to use the network’s SIX token from the sale of the digital asset for future investment or for a product and service purchase. They will also have the option of converting and withdrawing it in the form of cash.