Leading Europe-based bitcoin exchange Bitstamp, has been granted a license as a regulated Payment Institution by Luxembourg. The license is passportable into the 28 EU member states.

Bitstamp will become the world’s first nationally licensed bitcoin exchange in Europe once it will relocate its headquarters to Luxembourg on July 01st, 2016. Simultaneously, the exchange announced the launch of EUR/BTC trading.

The news follows a nearly two-year application process with the Luxembourg Financial Industry Supervisory Commission (CSSF) and marks a milestone for bitcoin and digital finance in Europe, according to Luxembourg’s Minister of Finance Pierre Gramegna. 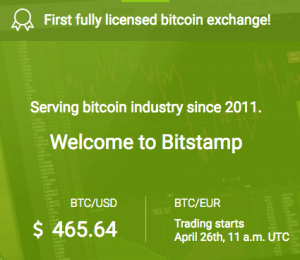 “Luxembourg has a long-standing history as an international leader in innovation,” Gramegna said in a statement. “That Bitstamp has chosen Luxembourg as its European hub only strengthens that reputation. […] Bitstamp is a most welcome addition to Luxembourg’s fintech ecosystem.”

A leader in digital payments and data privacy, Luxembourg has been chosen by the likes of Amazon, PayPal, PayCash and SIX Payment Services, to settle their European headquarters.

According to Dan Morehead, CEO of Pantera Capital and chairman and investor of Bitstamp, Luxembourg has set an example for other nations to embrace the bitcoin industry.

“Luxembourg recognizes the economic potential of bitcoin and blockchain. […] Countries playing host to major blockchain industry epicenters in the future may prove lucrative for their economies. Governments may feel pressure to compete after announcements like these by similarly enabling the industry, a clear benefit,” Morehead said.

The company has put a lot of time and resources into the regulatory process. This demonstrates Bitstamp’s commitment to be at the forefront of regulatory compliance, Nejc Kodric, co-founder and CEO of Bitstamp said.

Bitstamp’s licensure not only marks an important achievement for the digital currency industry, it also indicates that the historic reservation towards the industry can and will be overcome.

“When Pantera first invested in Bitstamp in 2013, the digital currency industry was a virtual Wild West — a promising frontier, yet unregulated and uncertain. Today’s announcement represents a major step in the industry’s maturation,” Morehead wrote in a Pantera announcement letter.

“As an investment firm focusing exclusively on digital currency and blockchain, we believe this industry has the potential to be immensely valuable in the future,” he said.

“We’re eager to see what lies ahead for Bitstamp, bitcoin, digital currency, and blockchain post this regulatory epoch of the technology’s lifetime.”