Shapeshift is back after suffering a significant loss due to three separate but related hacking incidents. The site returned on April 20th after a passionate post by the company’s CEO, Erik Voorhees, detailing their understanding of the hack. The site launched with Ethereum and Bitcoin support only. Today, Litecoin was added as well.

Shapeshift is known as a near instantaneous to convert a variety of cryptocurrencies to any other supported cryptocurrency without an account. At its peak, it supported 40 cryptocurrencies. That still seems to be in the company’s long-term plan, but other currencies will be phased in over time.

“Each coin adds complexity and development time, and many coins have special attributes that need to be cared for.” Voorhees said in response to our email.  “They are like baby animals, running around the yard in various states of disarray. [. . .]We’ll have many of the other top assets back within a week or so, and everything that was supported before will be supported again soon.”

This prudent approach seems like a good idea. Shapeshift was allegedly hacked three different times over the past few months. According to Voorhees’ post, one theft was perpetrated by a then-current employee identified only as “Bob” and  the other two were performed by a third party using information Bob provided to the hacker in conjunction with malware Bob allegedly installed on another employee’s computer.

Shapeshift works without an account and it doesn’t hold customer funds. Users send the cryptocurrency of their choice to the service, Shapeshift sells that currency on an exchange and they buy the requested currency before sending it to the address indicated by the customer. Because of this, no customer funds were lost, though the thousands of bitcoins worth hundreds of thousands of dollars lost will be a big hurdle for the company which is still in the pre-profit stage.

Ironically, the theft does help prove Shapeshift’s business model. Since Shapeshift didn’t lose any funds besides its own, they presumably can continue to operate normally, albeit with more stringent security protocols.

As mentioned, Ether was the first currency to join Bitcoin on the relaunched service, with Litecoin joining today. We have tested the Bitcoin to Ether conversion and can confirm that it works as expected. 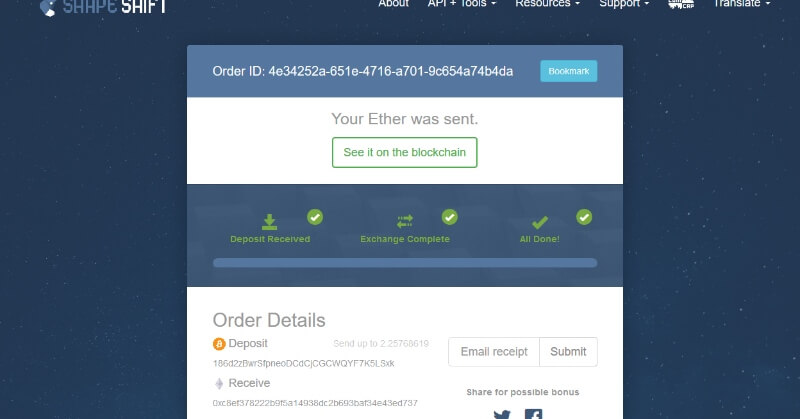 The reason for its inclusion was exactly what you would expect: market demand.

“Our biggest market is Bitcoin <-> Ether, so we decided to focus purely on getting that back for our customers.” Said Voorhees. Later in the email, he continued “It’s all about market demand. The Ethereum exchange volume has been consistently 10-20% of Bitcoin, which is to say, pretty significant.”

We will keep you up to date on any major developments involving Shapeshift’s relaunch.

[The Zombie hand in the picture above was adopted by ofsmallthings]