[Update 11:55PM EST: We have heard back from Valve. They confirmed that the letter was sent from them to developers and publishers on Steam, stating simply “Here is the note we sent to dev and publishers about it.” The note is in plain text below, followed by the original article]

“Bitcoin support coming soon!
We are excited to announce that Steam is going to start accepting payments via bitcoin.

We’re using an external payment provider to process bitcoin payments to help partners reach more customers on Steam. Bitcoin is becoming an increasingly popular online payment method in some countries, and we’re enabling a system that insulates partners from risk and volatility while still providing value to the end customer.

You do not need to take any action. If customers choose to pay via bitcoin, they’ll still be charged the price already set in the local currency. Here’s how it works:

We’re looking forward to the update, and we think it makes Steam an even better place to buy and play games. If you have questions or concerns, let us know at our Steamworks developer forum.”
[Original article below]

We reported back in February on rumors that Steam, would begin accepting Bitcoin. Today, those rumors were all but confirmed by a post to the non-public Steamworks developer forums. The post was meant to prepare developers for the digital store front’s imminent adoption of Bitcoin, was posted on Reddit.

Steam is the most popular digital PC video game marketplace and is owned by Valve Software.

We were able to confirm from an independent source speaking to CoinJournal that the post is real and remains up on the Steamworks developer forum at press time.

The post was first reported on by PCGamesN.com. An unnamed third party payment processor will handle the bitcoin payments and neither Valve nor the game developers will handle or hold bitcoin.

The February rumors came from a leak allegedly from the Steam translation project. That leak, which seems even more credible than when we first reported on it, mentioned BitPay as the potential payment processor.

At the time, BitPay stated “We don’t provide comment on Internet rumors” when contacted. Valve didn’t respond to our inquiries at all. We have again contacted both companies for comment and will update if they respond. As mentioned, we did manage to confirm independently, through a third source, that the post is legitimate.

While Valve won’t actually handle bitcoin, there are immediate potential benefits to them accepting bitcoin. Steam is a worldwide marketplace, and that causes some issues for customers who live in certain countries. Steam doesn’t yet accept the Australian Dollar, for one example, and so customers there have to pay up to 25% more for their games.

With Bitcoin integration, Australian customers would potentially be able to purchase games at the same price everyone else does by first converting their AUD to bitcoin.

There is also the growing microtransaction market, for both in-game items and collectable digital trading cards for games. Both types of items tend to sell for less than a dollar and could therefore benefit from lowered transaction costs.

It is also unclear if bitcoin purchases will be limited to digital goods, or if hardware like Steam Machines and the HTC Vive will be included. When Microsoft added bitcoin as a funding method for its online store, it limited purchases to digital items. Currently there are no indications on whether Valve will follow a similar strategy or not.

We will have more if and when information becomes available. In the meantime, here is our guide on buying PC games with Bitcoin on the cheap. 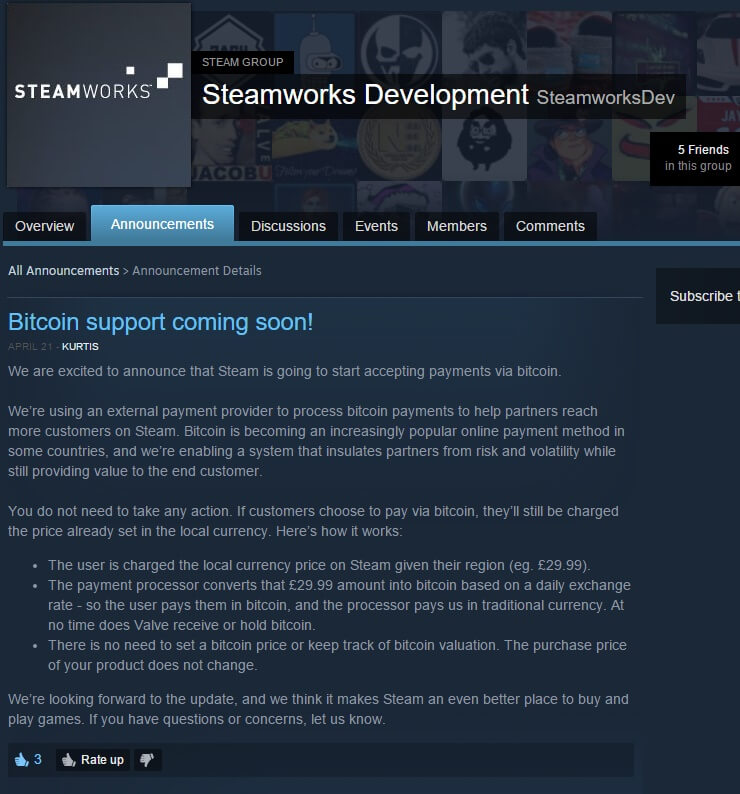 Coinbase gets initial reference price of $250 from NASDAQ