In an official announcement, the Coinbase team stated:

On June 14, Bitmain, arguably the most influential bitcoin mining equipment manufacturer and the parent company of Antpool, the largest bitcoin mining pool in the market, released a blog post entitled “UAHF: A contingency plan against UASF (BIP148)” to clarify the company’s plan to execute a hard fork and create a separate bitcoin blockchain if the Digital Currency Group-led Segwti2x is not approved or activated. In a comment to CoinJournal, Bitmain explained their reasoning:

At the time, the vast majority of exchanges and wallet service providers within the bitcoin industry have expressed concerns regarding Bitmain’s threats to hard-fork the bitcoin blockchain and clarified that the newly created bitcoin blockchain, if created, will not be considered as bitcoin but as an alternative cryptocurrency or an altcoin.

By Definition A Hard Fork Is Not Dangerous

Leading cryptocurrencies including Ethereum, Monero and Zcash perform or execute hard forks on a regular basis. In 2016, Ethereum executed four hard forks due to various security issues and to bail out investors from the decentralized autonomous organization (DAO).

In an extensive and analytical paper entitled “Hard Forks, Soft Forks, Defaults and Coercion,” Ethereum co-founder Vitalik Buterin previously noted that hard forks have benefits which soft forks do not offer. For instance, hard forks can update a blockchain network in a more elegant manner than soft forks.

“Proponents of hard forks are often derided as trying to effect a ‘hostile takeover’ of a network, and ‘force’ users to go along with them. Additionally, the risk of chain splits is often used to bill hard forks as ‘unsafe.’ It is my personal viewpoint that these criticisms are wrong, and furthermore in many cases completely backwards. This viewpoint is not specific to Ethereum, or Bitcoin, or any other blockchain; it arises out of general properties of these systems, and is applicable to any of them.”

Zcash CEO Zooko Wilcox has previously expressed similar views on the execution of hard forks, emphasizing that a hard fork that does not lead to a persistent branch of the blockchain and schism of the community is safe and secure to execute. A chart introduced by Wilcox showed: 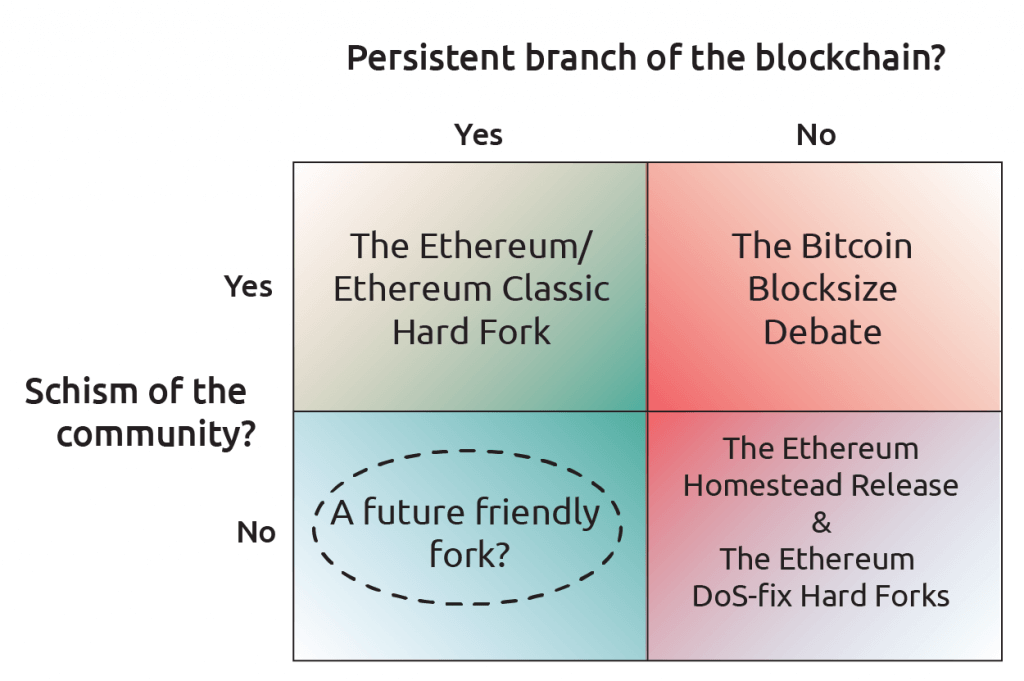 However, the UAHF was introduced with the sole purpose of creating another persistent blockchain of bitcoin and directly counters the criteria of a safe hard fork outlined by experts including Buterin and Wilcox.

Hence, Coinbase and GDAX announced that the two companies will not support the new blockchain or associated coin created by a hard fork designed to create two separate blockchains of bitcoin.

“Customers that desire access to UAHF coins should withdraw their bitcoin from GDAX by July 31. We support the growth and scaling of the Bitcoin network. Although we have no plans to support additional blockchains at this time, we will continue to monitor UAHF developments,” Adam White, the general manager of GDAX wrote in a blog post.