My divorce from CoinTelegraph has gotten fairly ugly. While, after revealing all that I knew, I was happy to drop the subject and allow them to move on, hopefully in a more transparent way, their “new” co-founder (who wasn’t around when the site was founded) and former CEO (who wasn’t in charge of writers at that time) has recently attacked me on ZapChain, implying that my claims were only made to grab attention and that she is interested only in the truth.

She then went on to say that CoinTelegraph has never taken payment for articles, and if they did, it would be clearly presented to the readers as such. I responded with DKIM signed emails that proved the company asked me to rewrite articles, so they could be edited into Cryptonote’s Wikipedia page without being taken down for copyright. She responded that had happened before she came to the company and therefore was not responsible for the actions of the site she now claims to not only be CEO of, but also its co-founder.

After her attack on me, I decided to go back over the emails she sent to my email address. For a while, she was sending myself and other members of the editorial team “leads” which were more or less press releases from her friends. I didn’t read many of the emails she sent me at the time, and truthfully I probably missed out on some decent stories mixed in there, but the point is, a lot of them were new to me now. One that I found, demonstrates that CoinTelegaph’s CEO had a cozy relationship with Neucoin. The Neucoin developer states that he wants to “get a huge presence on your family of sites over the next 3 months.”

The developer also notes that he had an interview set up with Allen Scott, who later declined to follow through on that. That may have become their motivation to ask for paid content. After a quick back and forth, she states this: [You can read DKIM signed versions of the emails here.]

Great to hear this and super excited about the launch! Linking you with Addy (CCed) who will help you build the right campaign for your business. Do you have a budget?

Big smiles for you and the team!

Regards,
Toni Lane Casserly, TLC.
(Sent from my mobile. Please pardon any error of the thumb.)”

[Emphasis mine] After which he replies:

“Hi Toni and Addy
We don’t have a precise budget quite yet, but we’d love to get a proposal (and very good bulk discount for special friends price) to get a huge presence on your family of sites over the next 3 months.
Also, maybe it’s too late, but we never heard back from Alan Scott about writing for tomorrow or the interview. I am going to blame Martin Stein at Social Radius (works with Michael Terpin)…
We did have long interviews with techcrunch, venturebeat and coindesk so there will be plenty of coverage tomorrow but would have been nice to be in cointelegraph too. Any way you can connect me with Alan or somebody else at CT that I could speak with tomorrow morning PST? (it is 1am in Paris and i’m toast).
Talk soon
Dan”

Let’s get you set up in a skype room and set a meeting time with Addy for this week.
I’m adding Allen, Ian and Cheryl to this thread. They’re our editorial team and will carry that conversation from here!

Looking forward to teaming up!

Addy refers to Addy Crezze who I was always was told was in charge of website and app development, but I guess also handles advertising. I also know Martin Stein, who is a PR rep for various cryptocurrency companies. He has never proposed any kind of pay-for-play scheme to me.

It is well known that NeuCoin paid for advertising on CoinTelegraph, and there is nothing wrong with that per se. The problem becomes if those adverts start bleeding into the editorial part of the site. Over the next few months, NeuCoin got an unusual amount of coverage on CoinTelegraph. While CoinDesk, Bitcoin Magazine and Cryptocoinsnews also covered NeuCoin, they had one, one and two articles respectively. By comparison, CoinTelegraph had four articles, a business catalog inclusion, and prominent placement in a “successful crowdsale” article, getting placement among the likes of Ethereum and Maidsafe, while taking Swarm, which raised more, off the list (Ziftrcoin, another coin who paid for ads on CoinTelegraph, was also chosen above Swarm). They even threw a mention of NeuCoin into their Coin Catalog page for Peercoin.

Since the three months mentioned in the email passed, CoinTelegraph has not written a single article about NeuCoin.

All five of the articles were written by either Charlie Richards or William Suberg, two ghost writers. With no online presence to speak of and no way to be held accountable.

When things started going sideways with pay, and authors suddenly found themselves with hundreds of dollars per article at the expense of other writers, it was these two writers who benefited the most. Back when I was still trying to fix CoinTelegraph from the inside, I went back a few months on the panel and documented all the posts that had an unrealistic share-to-view ratio. Social shares were the most important determining factor in an article’s pay. I found that Charlie Richards, William Suberg and manager Allen Scott had benefited the most from the unfortunate but (CoinTelegraph claimed) totally innocent outside bot. The two twitter accounts most responsible for the thousands of tweets were Bitcoinzwoman and Bitcoinzman, they still excessively tweet CoinTelegraph articles today.

The following list is incomplete because I only went back a few months and it was never meant to be a comprehensive expose, just a quick overview to illustrate some things for my fellow writers, to show them something was wrong, even though I wasn’t exactly sure what. In addition to the share numbers being screwy, the share to price ratio never seemed to make sense to anyone, as evidenced by the first post on the list. 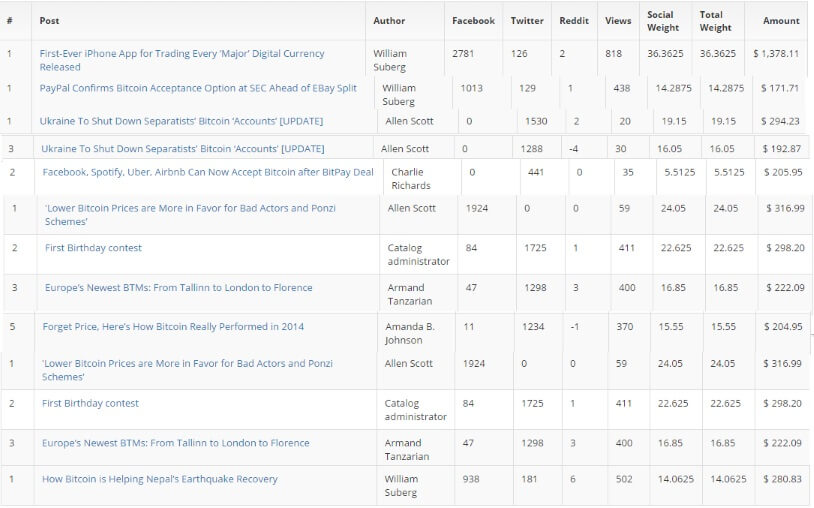 Both Suberg and Richards appear to have stopped writing for CoinTelegraph in July, assuming they haven’t just started writing under another name. I reached out to the name that was connected to one of the names on Skype, and my investigation into that is still ongoing. To be clear, I am not accusing them or implying that they were knowingly involved in any wrong doing.

Getting back to the emails, there isn’t anything that definitively proves those four articles came from the Skype conversation that happened after the email chain TLC wisely decided to include me on, but it seems unlikely that the two are unrelated. As mentioned, after the three months passed, CoinTelegraph stopped writing about NeuCoin.

I have no idea if the two ghost writers were involved in any dealings with Neucoin or with a deal with CoinTelegraph to steal other writer’s pay. Everything was very cloudy at CoinTelegraph and answers were never forthcoming. Once they switched to a system that put a stronger emphasis on views, we started seeing articles with the reverse (20,000+ views, normal amount of shares).

CoinTelegraph writers pick leads from a Trello board, and it is possible someone could slip them promo without the writers even knowing. Those articles could then be heavily pushed on social media, leading to higher pay for the writer, therefore encouraging them to pick up the next NeuCoin lead posted in Trello.

But that is what happens when you have a journalistic outlet funded by the very companies they cover. You never really know what is real and what is fake, which is a question I asked myself a lot while I worked at CoinTelegraph.

You don’t have to ask that here.
Do you think this article was worth one measly mBTC? If you would like to see more from us in the future, please consider donating. 1 mBTC is less than 0.25 USD at today’s prices and helping us out prevents us from having to resort to the allegedly shady tactics showcased above.