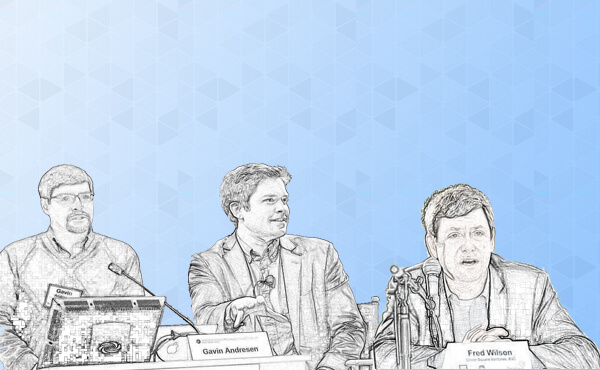 Gavin Andresen, Fred Wilson, and Nathaniel Popper on the Beauty of Why Bitcoin Works

When the average person thinks about bitcoin and blockchain technology, they usually think of it as an incredible piece of software that allows anyone in the world to transact with each other in a direct manner. Having said that, the most compelling aspects of Satoshi Nakamoto’s creation are found in the system’s incentive structure rather than its code. It was not a breakthrough in cryptography or electrical engineering that made bitcoin possible. On the contrary, it’s how honest actors are rewarded and cheaters are penalized that allows the system to function properly. This concept was recently discussed by Bitcoin Foundation Chief Scientist Gavin Andresen, venture capitalist Fred Wilson, New York Times reporter Nathaniel Popper, and Squawk Box Co-Anchor Andrew Ross Sorkin during an event at the New York Public Library.

How changes to bitcoin are implemented

Roughly halfway through the panel discussion, Sorkin asked the others on stage about what guarantees bitcoin’s scarcity. Sorkin mistakenly believed that 51% of the nodes on the network could simply vote to create more bitcoins, but Andresen explained that this is not actually the case:

“It would take 51% of the miners plus all of the exchanges and merchants, and everybody accepting bitcoin would have to agree to go along with that change. Otherwise, you’d create bitcoin that you couldn’t spend anywhere, and that’s no good, right? The only reason to get bitcoin is to trade them with someone who wants to accept them from you.”

The process of rolling out changes to bitcoin is not as clear-cut as some would imagine. Although Andresen and other developers can implement changes to Bitcoin Core on GitHub, the reality is that the miners must accept those changes. Also, the ultimate power in the system would seem to rely in the hands of bitcoin users. After all, bitcoin is not valuable if nobody is using the system. For example, many users probably wouldn’t accept a change to the protocol that required a name and address to be attached to every bitcoin transaction.

A collective interest in keeping the system alive

After Andresen essentially explained how the bitcoin community comes to consensus on the protocol, Wilson began to explain the core idea that keeps bitcoin from falling apart. He summarized this concept by paraphrasing a quote (which may or may not have been said by Benjamin Franklin). Wilson stated, “We need to hang together because surely we’ll all hang separately.” The well-known financier continued:

“That’s sort of the concept of mutually assured destruction. Bitcoin has that at its core. If we mess this up, everybody who has an investment in bitcoin — either in mining rigs, owning bitcoin, or by building a company using the bitcoin system — all of that investment will have gone to zero. So there is a collective interest in keeping the system thriving and balanced in terms of control.”

Popper then briefly described the March 2013 bitcoin blockchain fork in which the community had to come together and do what was best for the protocol rather than what was best for each individual participant in the system. Of course, the point Popper was trying to make with this example is that the incentive structure in bitcoin attempts to create a situation where it is always best to do what’s right for the protocol rather than the individual.

Wilson also mentioned what happened when GHash.IO gained a large percentage of the overall network hashrate. While some members of the GHash.IO mining pool left voluntarily, the pool also stated that they would limit their share of the network hashrate for the good of the protocol. A similar situation took place one year prior with BTC Guild. Although this may be a sign of the altruistic nature of bitcoin participants, the reality is that no one knows how centralized mining has become at this point. Many bitcoin supporters will point to the mining distribution chart on blockchain.info as proof of decentralization, but the real picture goes much deeper than that.

What if someone decides to takeover Bitcoin?

Near the end of this part of the discussion, the panel was asked what is stopping one actor from deciding that they want to become the “Ben Bernanke of bitcoin” and control the entire system. Andresen contended that nothing prevents this desire for power from existing within an individual or organization; however, it may not be a practical goal. He explained:

Many bitcoin users — even most of the Bitcoin Core developers — agree that bitcoin is still an experiment. The structure of incentives created by Satoshi Nakamoto are kind of like a bit of duct tape that holds the entire system together. That may not be too reassuring to anyone heavily invested in the digital commodity, but it’s worked pretty well so far.