As countries such as the US, China and Hong Kong are progressively tightening regulation around crowdsales and initial coin offerings (ICOs), the UK has the opportunity to create a regulatory framework that is conducive to innovation and attract the world’s most forward-thinking businesses, according to Barry James, the co-founder and CEO of the Crowdfunding Centre.

Speaking ahead of an All-Party Parliamentary Group taking place at the Houses of Parliament today, James urged the UK Financial Authority Conduct to ensure that the regulation of ICOs does not jeopardize the opportunity that blockchain brings.

“Regulators across the world seem to be in a collective state of mortal panic about ICOs and crowdsales,” James said. “While this is understandable given their naturally conservative natures it increases risk rather than reduces it. Not only that, it risks killing a truly golden goose which could otherwise benefit us all long into the future.”

“The implications of blockchain technology are immense, and the applications are as exciting as they are diverse. Programmable, ‘smart’ money will be integral to our future lives, streamlining processes in every industry.

“ICOs and token sales provide a way to fund the positive innovations we need, and businesses need an alternative source to the banks.” 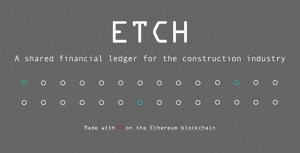 London-based blockchain startup Etch is about to launch its ICO to fund the development of an Ethereum-based real-time employee remittance platform targeted at the construction industry.

The solution will allow employers to pay their employees in real-time and reduce the need for payday loans and other such instruments to plug spending gaps. It will use blockchain technology to unify payroll and remittance services to create a platform that not only benefits employees in their lives, but reduces business inefficiencies, saving them time and cost in payroll.

Etch co-founder Euros Evans will be joining James at the joint meeting today to debate several topics around ICOs, token sales and crowdfunding. In particular, James and Evans will lead a discussion on how the UK can ensure that its regulatory framework created the conditions that the next generation of blockchain entrepreneurs need in order to thrive.

“This business would have been impossible without blockchain technology.

“By supporting firms like Etch, the UK can reduce its reliance on the huge, old-fashioned financial services firms and banks, with all the complexity costs and friction they bring.”

The meeting at the UK Houses of Parliament comes at a time when jurisdictions around the world are looking to regulate ICOs. Last week, the Chinese central bank banned ICOs and is reportedly investigating platforms that facilitate them.

Meanwhile, in Japan, startup Tech Bureau is preparing to introduce a new platform built on the NEM blockchain called COMSA that covers nearly all aspects of the process of an ICO. Last week, the startup raised US$15 million from Japan’s largest VC firm JAFCO to kickstart its plans.

Etch are an advertiser on CoinJournal, however, this post has not been paid for.