Lala World, a blockchain startup headquartered in Singapore, has raised US$2 million in a Series A funding round to bring cheaper and more efficient financial services to the unbanked. No details about the investors that participated in the round were revealed.

Lala World uses blockchain technology to provide the unbanked and underserved communities with access to various financial services without intermediaries and with minimum transaction costs.

Its services are centered around its Lala Wallet, an Ethereum and Hyperledger based platform that enables peer-to-peer transfers, global remittances, local and international bill payment, and peer-to-peer lending. The Lala payment card will also be linked to the digital wallet. 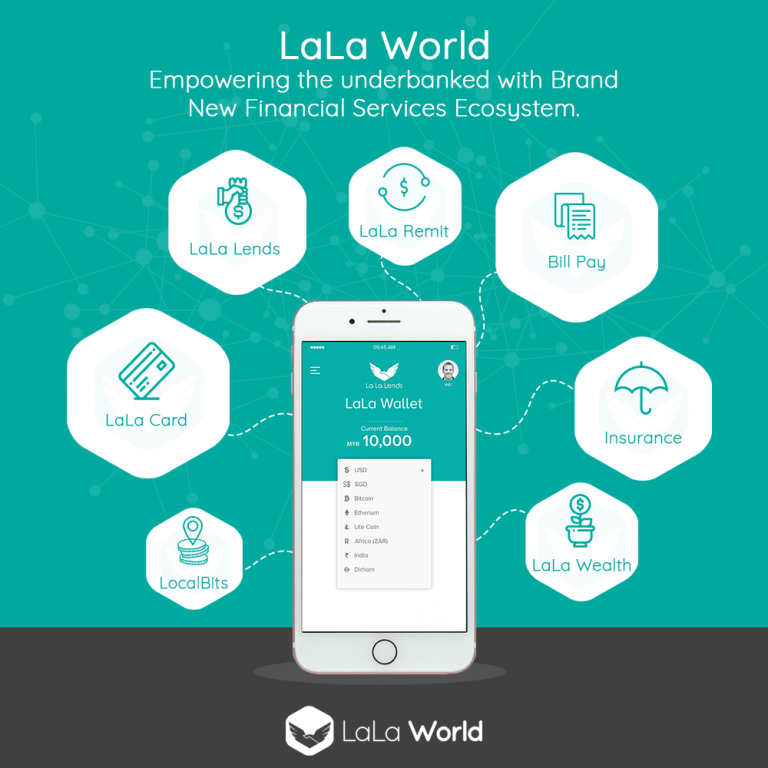 Lala World says it aims to create a unique financial services ecosystem that integrates blockchain technology and cryptocurrencies into the existing financial framework.

It claims that migrant workers are currently charged around 10% in commissions and fees for sending money to their families back home. Using blockchain, Lala World seeks to reduce transaction costs to under 1%.

“The majority of the underbanked face severe challenges as they lack basic banking education,” said Sankalp Shangari, founder and CEO of Lala World. “Sending pay-checks to their hometown would take weeks and to compound matters, they have to pay various charges, which can be pretty hefty.”

“In the past 20 years, while the world has changed and the Internet has transformed things, the travails migrant workers go through are still the same. I know what they went through and that’s why I started Lala World.”

Lala World said it has struck various partnerships across Asia, Africa, the Middle East and in Europe. A fiat prototype is being tested across users in Malaysia and India. The company seeks to get at least 500,000 migrant workers in Malaysia on board its platform over the next 12 months.

In addition to its freshly raised US$2 million Series A funding round, Lala World is planning a pre-ICO.

According to the World Bank, around 2 billion people around the world do not use formal financial services and more than 50% of adults in the poorest households are unbanked.

Financial inclusion, which means that individuals and businesses have access to useful and affordable financial products and services that meet their needs, is a key enabler to reducing poverty and boosting prosperity. World Bank Group president Jim Yong Kim has called for Universal Financial Access (UFA) by 2020.

Blockchain and mobile technology are providing solutions to the large population of unbanked: mobile banking and payment solutions are opening new access routes to and for customers; while payments and remittance settlement can happen more rapidly when using blockchain, allowing people to access their capital when they need it.

Stellar, an open source payment network built on blockchain technology, has been implemented to several non-profits and businesses as financial infrastructure, particularly in the developing world.

The Praekelt Foundation, for instance, integrated Stellar into Vumi, its open-source messaging app, to let young girls in Sub-Saharan Africa save money in airtime credits.

In December 2016, more partnerships were announced, including in the Philippines, India and West Africa.

Bitcoin is ‘a tool for social justice’: ex-Fed official

Meme stocks will taper off as traders turn to crypto, says fintech CEO

Register with one of our recommended partners now

By completing this form I understand that I am going to be redirected to a 3rd party trading partner and that my personal information will be shared.