U.K.-based Energi Mine has today launched its blockchain-based platform that aims to decentralise the near $2 trillion global energy market by incentivising energy conservation. Former energy spokesman for the Liberal Democrats for the House of Lords, Lord Rupert Redesdale has also been appointed as an advisor to Energi Mine.

According to Manchester-based Energi Mine, the current electricity market approach is broken as it encourages energy companies to sell as much energy as they can, at the highest price possible. The company currently manages over $140 million worth of energy on behalf of its customers, and looks after around 1,100 customer sites in the U.K., France, Belgium and the Netherlands. The newly launched platform is aiming to change the market by encouraging consumers and organisations to reduce their energy consumption. It hopes to achieve this by issuing ETK tokens to reward energy efficient behaviour, such as taking public transportation or purchasing energy-efficient appliances.

“Our AI and blockchain technology will plug into existing data feeds – smart meters or transport software – to verify energy saving behaviour has taken place,” said Omar Rahim, CEO of Energy Mine, speaking to CoinJournal. “We then help organisations build and manage their reward schemes in our infrastructure.”

Through the ETK tokens, token holders can redeem them on the Energi Mine platform to pay for energy bills, electric vehicle recharging, exchange them for fiat currency instead, or trade them directly with transport authorities to pay for their trip. With the process designed to be as frictionless as possible, users will receive their tokens via a simple-to-use app, which they will receive from local transit authorities such as the Transport for London. It’s hoped that behaviours can be influenced via rewards.

Furthermore, through Energi Mine’s decentralised platform, excess energy from a consumer can be sold to a different consumer at transparent market prices, rather than sold to a power supplier at a rate determined by the power supplier.

“The ultimate goal is of course to reduce global energy demand,” added Rahim. “It’s very difficult to change human behaviour and at the start of any movement it is necessary for there to be a financial reward. In the long term, wasting energy will become taboo – but we are not there yet.”

Previous
AMD Stocks Dropped After Morgan Stanley Predicts Lower Demand for Cryptocurrency Mining Chips in 2018
Next
A First Of Its Kind: indaHash’s ICO 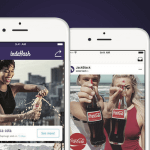