[Edit: Mark Lyford has tried to claim in a NSFW response video and on the bitcoin talk forum that the images of Banxshares.com below was fabricated. Here is a Google Cache version of the site so you can see for yourself that is not the case.]

Alleged ponzi scam and alleged Cryptocurrency Banx (aka “Banx Shares”) can finally be sold by holders not named Mark Lyford, and as suspected, the claimed value of Banx did not hold up. Banx has plummeted to 550 satoshis, or less than half a US cent at today’s prices. After an order worth 0.67 BTC, the price drops off significantly. 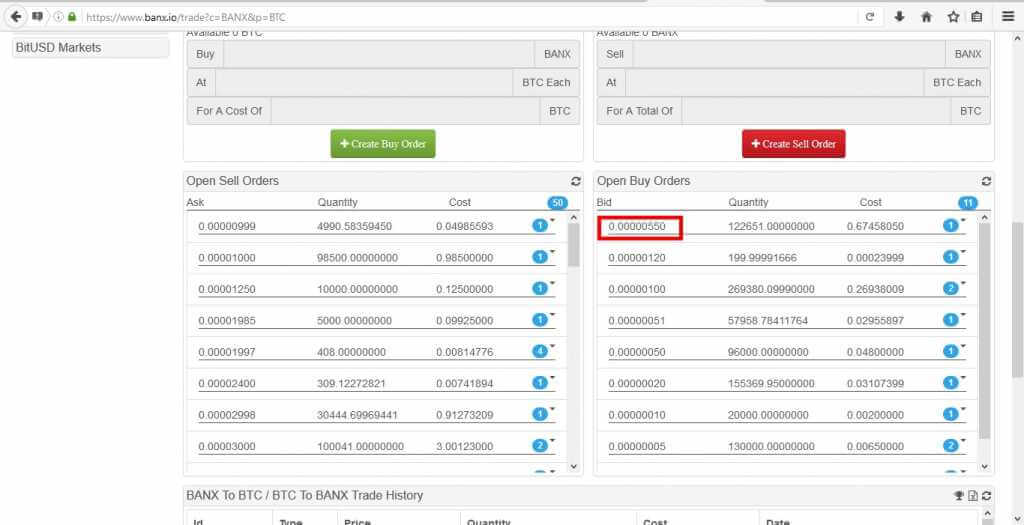 Mark Lyford emailed us, asking for coverage of this event.

[Note: At times, we will state in this article that Banx’s “price” decreased. That is not entirely accurate. Without an open market, there was no price discovery, so we have no idea what the “true” price of Banx was. When we say the “price decreased” we mean that the new open market price has decreased from the artificial price previously quoted on Banx.io. In reality, Banx Shares never had a true price, because it was never sold on an open market.]

While hyping Banx, creator Mark Lyford attempted to claim a massive marketcap for Banx by multiplying the claimed price of Banx with the total number of Banx. That price was artificially inflated because no market accepted Banx besides Banx.io, which would not permit the sale of Banx below a certain price. Since no one was buying Banx at that price, virtually no sales took place on the marketplace, but the quoted “price” would remain the same. These shenanigans led to them being pulled off of CoinMarketCap.com, thanks in large part to our investigation. Banx.io regularly claimed Banx was worth two to three dollars a piece.

Mark Lyford claimed he would open the market when all Banx Shares were sold. That plan changed to getting the Banx on Bitshares, a Cryptocurrency 2.0 project that, among other things, enables the sale of token-based assets. In theory, Lyford would be unable to control his currency’s price on Bitshares, though Bitshares does allow for some restrictions and controls, if the asset owner enables them.

With new investments drying up, according to our previous investigation, it isn’t a surprise that Lyford would move to the next stage of his scheme. Attempting to quiet what he calls the “troll press” Lyford has publicized Banx’s move onto Bitshares’ network as proof that his plan was honest all along. However, discovering the true value of their investments has not quieted investors of Banx.

The Banxforums have seemingly been cleaned of nearly all negative posts, except for one thread in which Mark Lyford said he would answer questions, investors there have been demanding answers, though Lyford has been slow to give them.

One investor asks how his $1600 investment has become worth $20 overnight, an 98.75% decrease, after the move to Bitshares.

Since that post, Banx has continued to decrease in price.

“Banx” has had many iterations, including as a mining company and a physical bitcoin mint, though none of its projects have been anything that could be called successful. Another dissatisfied Banx investor whose post wasn’t deleted, illustrated the path he followed. From buying bitcoin mining power through Banx Capital, to being stuck with worthless banx shares.

The last “official” price of Banx on Banx.io, the price it couldn’t be sold below and was presented to potential investors as the value, was 0.0054 BTC or 540,000 satoshis, worth about $2.20 per share.

Banx Platinum was another mysterious product offered by Mark Lyford and co. It claimed to be an exclusive investment group that would train customers on how to make money in bitcoin. Thanks to unhappy customers, we now know what precisely that entailed. It was supposed to include webinars, an investment pool and a bonus of Banx shares. The webinars were infrequent and according to one member, only talked about Banx-related plans, which didn’t materialize. The investment pool never happened at all. 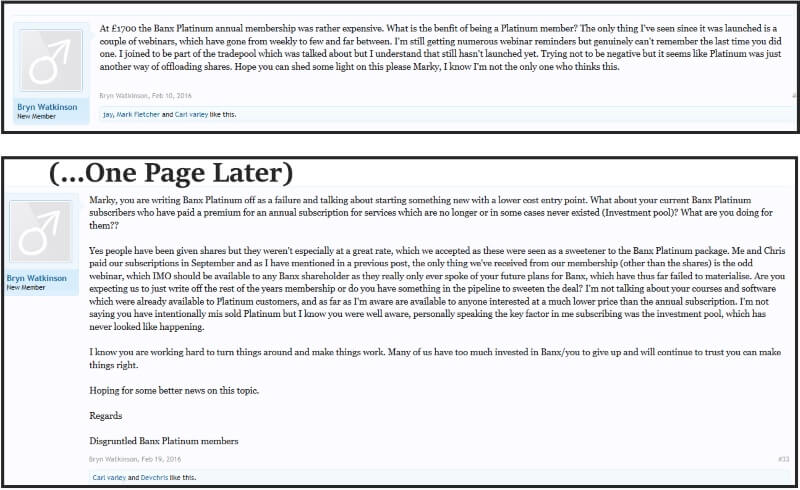 It seems the “sweetener” Banx shares were the only tangible item given to Banx platinum members, and those are all but worthless. Digital Money Revolution’s site and pitch is very similar to Banx Platinum’s, except with a lower price.

There is more evidence that the forum has been purged of negative posts. While we couldn’t find a cache of a previous version, current “announcements” lead to posts that have been deleted, suggesting that a large number of posts have been removed.

The vast majority of remaining topics were posted by Mark Lyford or Bizzyb, a longtime defender of Banx and Mark Lyford.

Lyford has turned on two marketing funnels that are intended, according to Lyford, to push people towards Banx.io. These two sites are EntrepreneurAction.net and DigitalMoneyRevolution.net.

Banx was originally sold as a cryptocurrency and a share in Lyford’s company Banx Capital. Since that time, Lyford has increased the total number of Banx shares twice. He doubled it from 6 million to 12 million in 2014. Then, before putting it on Bitshares, Lyford increased the total supply by tenfold, from 12 million to 120 million. All after promising the number would never change. Increasing a coin’s total supply is considered one of the cardinal sins in the cryptocurrency world. While, allegedly, members also received a 10x increase, since Lyford and Banx Capital hold the majority of the total Banx, the move could give them more capital to play with to manipulate the market.

Lyford’s own sales pitch for Digital Money Revolution mentions that “Inflation is simply not possible with Bitcoin.” Yet with Lyford’s own cryptocurrency, mass inflation is the norm. Banx has inflated by 1900% since its creation. By comparison, the US dollar has inflated 0.2% during that time, according to usinflationcalculator.net.

We should also point out that while Banx investors have lost virtually all of their investment, their money did not vanish into thin air. Creating Banx cost Lyford virtually nothing (it was a copy and paste from foocoin, as revealed in our initial investigation.) Would-be bitcoin investors were lured in with Lyford’s reverse funnel marketing techniques that promised them a more effective way to obtain bitcoins. Everything they would have invested into either Bitcoin or legitimate Bitcoin companies have gone into Lyford’s pockets. Lyford recently bought a house, according to videos he posted to Periscope.

Banx’s Past Foretold Its Shady Present

Banxshares.com lists business statistics meant to entice potential investors. They include 2737 BTC in mining profits, 2231 BTC in trading profits and 7248 BTC to be given back to investors in “dividends.” Lyford has admitted on multiple occasions, to this outlet and on public forums, that Banx Capital no longer performs cryptocurrency mining and he failed to provide proof that they have ever mined cryptocurrencies.

Lyford is keeping these blatantly false statistics online, despite being alerted of them multiple times, and has even added new ones. Last year, Lyford added a disclaimer stating they were projections, but that has since been removed.

The site now simply says the statistics are “financials at a glance” and asks investors to “share in their success” clearly implying that those are current figures for the previous year. That would make sense, since it is now 2016. The issue is that none of the businesses have seemingly performed anywhere close to Banx Capital’s claims and many of them don’t exist at all.

We asked Lyford what he had to say to investors who bought in at two or three dollars based on his advice that Banx was a good investment, but he has not replied more than 24 hours later.

Banx.io will also be going through another branding change, switching to the name cryptomic.com. Dividend payouts, which were always small and oftentimes paid out in now worthless Banx rather than bitcoin, have dried up completely.

Going forward, according to Lyford, profits, if they even exist, will be put towards buying back Banx shares. In theory, that would increase the price. Lyford claims the process will be completely transparent, but we have yet to see any of that transparency take place.

We won’t be holding our breath.