Wirex, formerly E-Coin, has announced a new feature allowing users located in 39 countries to purchase bitcoins via Paypal. ‘Buy bitcoin with PayPal’ especially targets users in developing countries and intends to provide them with an easy, low cost method to buy bitcoins using their PayPal account.

Speaking to CoinJournal, Tim Frost, VP Marketing and Business Development at Wirex, said that providing users with the ability to buy bitcoins has always been “a major goal” of his company.

“This is one of our first parts of offering a hybrid banking platform. Besides offering the easiest way to use bitcoin through our debit cards we wanted to incorporate popular payment methods. Our next steps are offering mobile banking, and the ability to send money across borders for very low fees. “

Frost further indicated that Wirex was about to launch a mobile banking application that would provide users with he ability to send money for very low fees across borders.

However, Wirex cannot ship E-Coin plastic bitcoin debit cards to Botswana, Honduras, Mozambique and Senegal. Users in these countries will only be able to use the company’s virtual card.

Wirex said it plans to extend the list with more countries, it said in a release.

To buy bitcoins with PayPal using the Wirex/E-Coin platform, users need a PayPal account registered in the countries cited above, a Wirex/E-Coin account and an E-Coin debit card.

Users will first need need to link the card to their PayPal account. 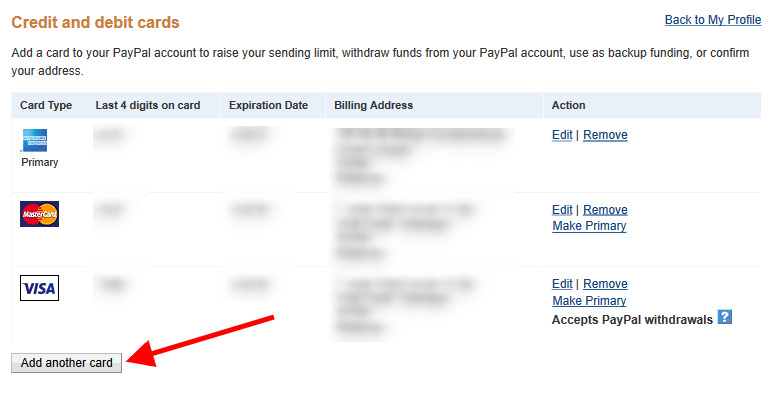 To request a withdrawal from PayPal to a Wirex/E-Coin debit card, users need to select ‘Withdraw Money’ to a payment card and select the bitcoin debit card.

Wirex doesn’t charge any fee for this feature but PayPal will apply a fee of US$5 per transaction which it will deducted from the amount to be withdrawn. The minimum amount users can withdraw is US$10.

It takes between five to seven to have the funds deposited into the Wirex/E-Coin card.

In addition to PayPal, Wirex provides dozens of options to buy bitcoins and load a Wirex/E-Coin bitcoin debit card. This includes through bank transfers, but also alternative methods such as PaySafeCard, Alipay, Qiwi and eKonto.

E-Coin announced its rebranding to Wirex in February, citing its intention to distance itself from the perception of being a bitcoin-centric company. Through Wirex, the company is positioning itself as a personal banking solution provider that combines the benefits of blockchain technology with every day finances.

Wirex will integrate the company’s successful bitcoin debit card service E-Coin. All E-Coin users, cards, and accounts are expected to move over to the new wirexapp.com portal following the platform’s launch in April 2016.

Introduced in early 2015, E-Coin currently serves over 100,000 individuals from around the world. The company has issued 15,000 E-Coin bitcoin debit cards, and claims a monthly transaction volume of over US$2 million.