Michael Taggart is the face of SteemCash and claims to be a co-founder of BitShares. From 2014 through an undetermined amount of time, Michael Taggart helped promote and was an integral part of Mark Lyford’s alleged Ponzi scheme Banx Capital.

When asked, the BitShares community debated if Michael Taggart is indeed a co-founder of the long-lasting coin and platform. However, a few influential members of the community did come to his defense and backed his claim as a co-founder, including Stan Larimer, a co-author of the Bitshares whitepaper.

It is worth pointing out, however, that several members of the BitShares forum adamantly denounced Taggart and Lyford.

Taggart, despite defending Lyford and claiming that Banx was not a scam, vehemently denies having any part in Banx, besides what Mark calls a small amount of “marketing”. Documents uncovered by CoinJournal seem to prove otherwise.

Taggart, also known as “Michael X” and “Murderistic” on the Bitshares forum, once listed himself as a co-founder of Banx on Angel.co page. Taggart blamed that on a shared secretary between her and Mark Lyford. The unnamed secretary, has not confirmed that claim. Taggart has since removed any mention of Banx from his profile. 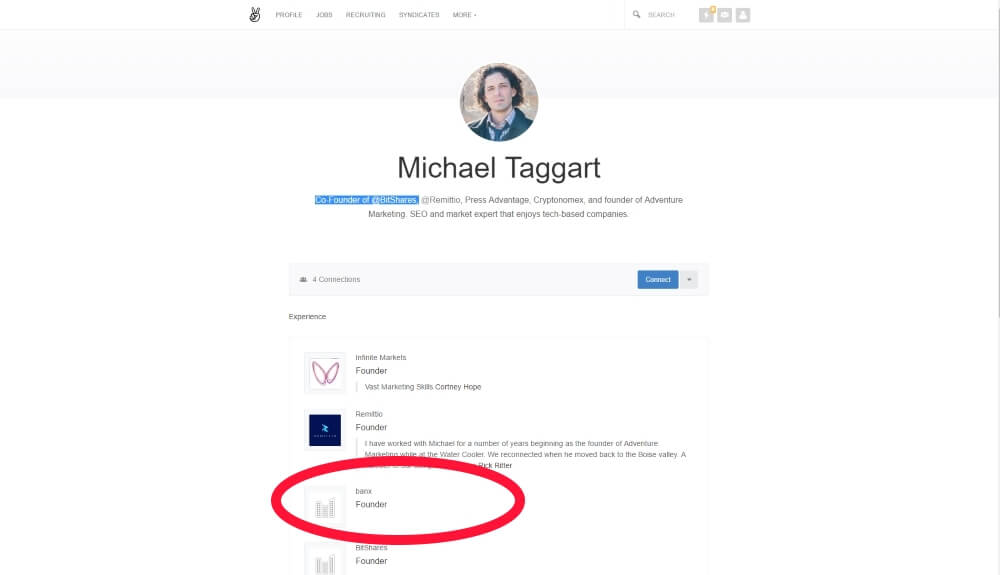 More documents give further evidence that Taggart was intimately involved in Banx.

A pdf document sent to Banx holders in November 2015, explained Banx’s alleged plans and listed Taggart as an integral part of it.

“It’s exciting times. CrowdMy.com will be a 50/50 partnership company with Banx and Michael Taggart’s company.
CrowdMy.com will be a future platform for offering other Banx offerings, products and
services. It will be fully regulated in the Cayman Islands and offering the chance for
people to invest into a fund per offering.”

CrowdMy.com, like the vast majority of businesses linked to Banx, never launched. The website is registered to a Lyford Group Ltd. There was no mention of Michael Taggart in the company filings. Legally, the Lyford Group Ltd. owns all of it.

In another document sent to Banx holders, Taggart’s connection with Banx through CrowdMy.com is further confirmed. 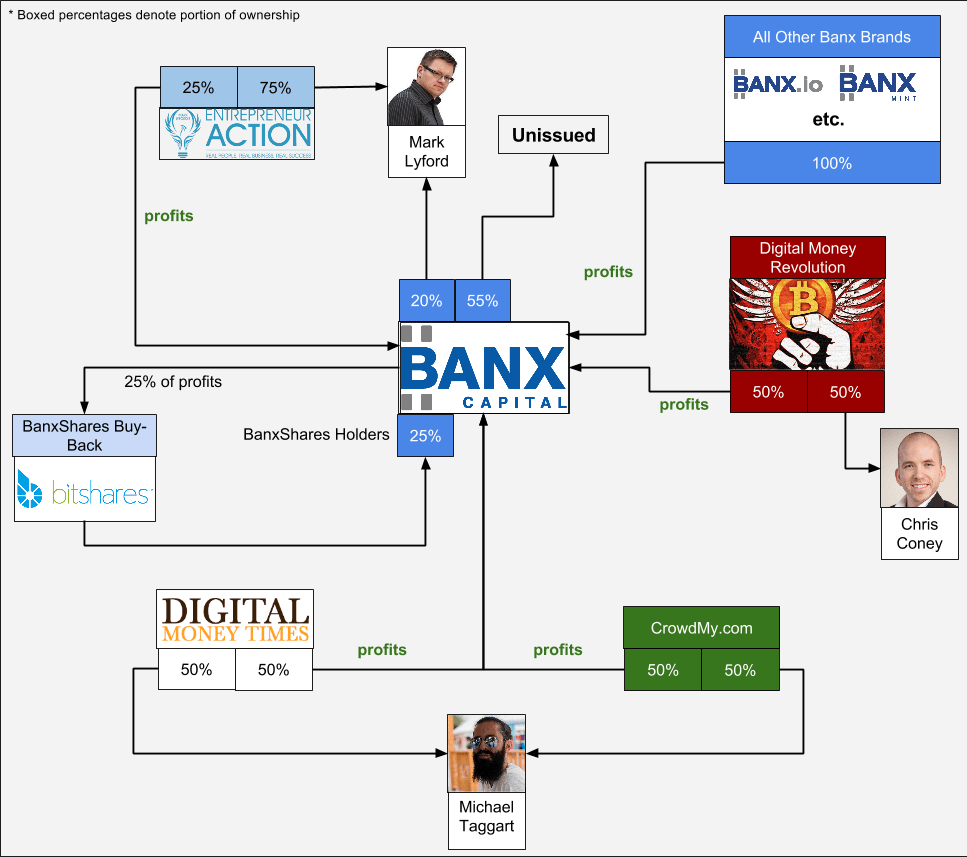 That is not all. Taggart also gave a two hour testimonial/webinar that was ostensibly about bitcoin, but then later pushed viewers onto Banx. Taggart’s YouTube channel‘s last three uploads are also Banx related.

We uploaded a copy of the webinar, entitled “How To Make Reliable Automated Income With ZERO Work Required” onto Vimeo, for archival purposes. You can view that video here.

A member of Banx’s forums also connected Taggart to Banx.

Today, Mark Lyford and Michael Taggart continue to work together. SteemCash is their current cryptocurrency focused scheme. It is presented as an educational tool for users of Steemit. Not affiliated with the social media site in anyway, that isn’t immediately apparent in their sales pitch. SteemCash is using the same layout and a very similar pitch to Banx’s advertisements

While Lyford and Taggart dangle huge returns in front of potential customers of SteemCash, they have struggled on Steem themselves. Mark’s public Steem account has seen no successful posts. Taggart has a few posts in the hundreds of dollars, but the vast majority are under that and he certainly has not been making the kind of profits he advertises for SteemCash. In the meantime the two are working on another company, also registered by the Lyford Group, called Accrusoft.

Accrusoft, like Lyford’s other companies, seems to be going in a million directions at once. It follows the same path as Banx Platinum (an alleged bitcoin education group) and Steem Cash, charging monthly fees for educational “webinars”. Accrusoft has focused on everything from selling books on Amazon to selling software that helps you sell more software that helps people sell that same software.

It is common practice for scammers to quickly jump from business venture to business venture, never following through and never really succeeding at anything, other than catching a few marks.

Taggart and Lyford ed to have put their SteemCash scheme on hold. No doubt the plethora of angry Banx investors warning Steem users had something to do with that. The SteemCash site recently updated with a multi level marketing/selling scheme.

Lyford’s claims that Banx was not a scam. Our three articles (1, 2, 3) on the subject should be very illuminating for those who haven’t read it. A quick overview: BanxShares allegedly represented ownership in Lyford’s company. However, he never registered his company to have public ownership.

Banx Shares owners were supposed to get a piece of all Banx related projects. Allegedly, that included a mining farm, physical bitcoin mint, trading tools, cryptocurrency exchanges, online marketplaces and several other projects. None of them were successful. Lyford didn’t even launch most of them.

Lyford also presented Banx Shares as a cryptocurrency. However, Lyford controlled the currency. Only one exchange accepted Banx, which Lyford also owned. He enforced a price that no one could sell below and then utilized that price to calculate Banx’s market cap as continually rising. Few people, if any, were buying at that price.

When Banx Shares finally joined the BitShares network (long after its promised release) the price went almost to zero, and some investors say they lost tens of thousands of dollars. Without a doubt, anyone investing in Banx saw their investment evaporate over night.

After, Mark shut down all sites related to Banx, including its forums and making the subreddit private.

Lyford and Taggart then went on to create something called “Entrepreneur Action”. Lyford made a BitShares asset called Entrepreneur Action. He promised to allow Banx holders to trade their coins 1 for 1 for this new asset. Half a year later, the asset is now listed as “inactive” on the Bitshares network. EntrepreneurAction.com still has not launched (it still has placeholder text) and Lyford moved onto SteemCash. This, after promising to focus on Entrepreneur Action entirely.

“Entrepreneur Action is the only business I am focusing on over the next two years, I will be living and breathing it.” Lyford said in a post to Banx holders.

That Taggart has been so adamant in denying his Banx connections doesn’t exactly speak well for the defunct currency either.

We contacted Taggart about these discrepancies, but he chose not to respond.

Michael Taggart, claims to be a “Co-Founder” of BitShares. He also claims to have no involvement with Banx. I’m not sure of his first claim, but the second is demonstrably false.