Purse.io has become one of the most popular bitcoin services. Nearly anything can be bought through Amazon, therefore if you could spend bitcoins at Amazon, you could buy nearly everything with bitcoins. Unfortunately, Amazon doesn’t accept bitcoin, so a few different sites have filled the gap in order to make that possible. Other services, like Gyft and eGifter, allow you to purchase Amazon gift cards with Bitcoin, and in the case of eGifter, gives you a percentage back in the form of points for your trouble (Gyft no longer gives out Gyft points for purchases).

Purse.io takes a different approach, it allows you to purchase items directly off of Amazon, and gives you 5% off immediately for your trouble, or more if you are willing to wait for another user to pick up your order.

It isn’t quite as simple as that on the back end. Specifically, buyers tell Purse what they want and put the appropriate amount of bitcoin into escrow and then either Purse or another seller purchases that item for the buyer and sends it to their address. Once the items are received, the buyer releases the escrow and the transaction is completed, 5% or more is saved by the buyer and if it is available on the item, Amazon Prime shipping is usually included to boot.

Depending on the size of your purchase, Purse.io can save a lot of money, especially if you don’t have an Amazon Prime account. But is the experience of using Purse.io as good as it could be? That is what I’d like to explore here, with this Purse.io Review, because I think that is one area where they have a lot of room for improvement.

First, what a quick word on how Purse.io actually works: You can import an entire Wishlist or paste a item URL in the Purse.io search box and it should pop up. I say should, because it fails if Amazon has added some text to the URL because I looked at pictures or read reviews. It seems like it would be a trivial fix to have the search bar automatically truncate those URLs and find the intended item, but that doesn’t appear to be the case.

In addition to buying things from Amazon, you can purchase items directly from Purse.io merchants. However, while it is consistently growing, the selection is rather bare at this time, focusing on bitcoin products and a smattering of tech gadgets.

That said, it is still relatively simple to import an item you want from Amazon to Purse. However, while it is simple, it also seems like an unnecessary step. Why can’t I search and browse Amazon items directly on Purse? As mentioned, there is a search bar, but it isn’t as effective as Amazon’s. For an example, a search for “Xiaomi” brings up 20 pages of products on Amazon.com but only 11 total products on Purse.io.

Once clicking on the item, options are again limited. You can’t see any reviews from Amazon buyers, which could be a copyright issue, but Purse.io doesn’t have a section for buyers to leave feedback either. With so many fake and bought reviews on Amazon, I think Purse.io is missing an opportunity to provide its users with honest reviews (at least until it becomes popular enough to attract its own fake reviewers). Worse still, while every merchant’s reputation is publicly visible, it doesn’t provide many details. Users can only vote up, down or neutral on a merchant and there is no way to provide more details. It would be nice to be able to read reviews of other users and evaluate for myself if their complaints are reasonable or not.

A few times, a purchase ended up costing less than Purse initially estimated, usually due to taxes or shipping, and they returned the change to my Purse wallet. It was only a few cents each time, but a nice surprise nonetheless. One time, a product ended up costing more, so I canceled it. Purse ended up sending me several emails asking me to complete the canceled order, and it took me actually emailing them before the alerts stopped coming. Still, that was a minor inconvenience and it only took one email before they realized their mistake.

Purse.io does offer a way to get deeper savings with their “name your own discount” feature. It allows users to upload a wishlist, and then name how much they would like to receive off the total price. As users move a slider up to increase the discount, the site will list the probability that it will get grabbed by a seller. But again, this process isn’t as smooth as it could be. Purse.io’s search option is disabled for the feature and it requires you to create and then share a wishlist.

There was another issue when I tried to order an item from Hong Kong. It came with free shipping but the shipping time was up to six weeks. Someone flagged my order as having an issue with “long shipping times” and after a few hours, my order still wasn’t accepted. The issue stems from the escrow system. Since the buyer won’t receive their bitcoins until I release them from escrow after receiving the item, most don’t want to accept orders that will require a month or longer to receive their bitcoin.

I canceled the order and picked a different item with Prime Two-Day shipping instead. I set it to 16% off and it was picked up quickly. The item arrived two days later without incident. Purse Instant, which gives you a flat 5% discount, does not have any issue with orders requiring long shipping time, but the name your discount merchants apparently do.

Another issue with using the Purse.io platform is the inability to use the Amazon Affiliate program. One of my favorite ways to contribute to podcasts is by using their Amazon affiliate link when purchasing stuff on Amazon. I can still do this using gift cards bought using bitcoin, but cannot when using Purse.io. To help offset this, there is an optional 1% donation to “charity” at no cost, but it would be nice if there were a few choices on where that 1% will go towards.

Initially, I was also concerned about the return process, but as it turns out, Purse gives you the Amazon Order ID once the order is completed, so if there are any issues with an order from Amazon, returns are dealt directly with them. Orders from Purse merchants use the escrow system to solve any disputes. I did not run into any issues with completed orders, so I was unable to test the return process.

Ultimately, Purse.io’s discounts far outweigh the issues with its usability. Sure, it would be nice to have Amazon reviews visible on Purse, if all of Amazon’s items could be searched through Purse’s website, if long shipping times weren’t an issue with the name your discount feature and finally, if orders could be lower than 10 dollars. But those inconveniences pale in comparison to the convenience of spending significantly less money at Amazon.

Purse isn’t perfect and that stops it from getting a perfect score, but what it does is extremely valuable. Even if they weren’t able to offer discounts and only facilitated Bitcoin purchases on Amazon, that alone would be a valuable service. Being able to get steep discounts on Amazon, already a steep discount over retail stores, is something that can appeal to both people who already own bitcoin and people who still need to be convinced to jump in. 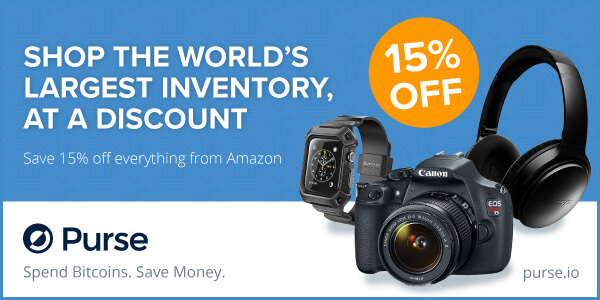 [Note: Purse.io recently announced a program that allows anyone to become a merchant on the site and sell goods directly on Purse.io for bitcoin, in addition to buying items for customers from Amazon in exchange for bitcoin. This Purse.io review is not of that feature and is instead a review of buying items from Amazon from Purse.io using Bitcoin. If we review selling items on Purse.io for bitcoin in the future, we will link that review here. Also, this review includes affiliate links, if you click on them, you’ll be helping support CoinJournal.net]