Blockchain-powered social media platform Steemit has seen its user base grow by 1,600% in its first month of operation. According to Steemit’s co-founder and CEO Ned Scott, traction is mostly coming from the cryptocurrency community who enjoys the inclusion of a financial incentive to social media.

“Steemit brings new concepts to social media, one where it’s entirely built on blockchain technology to make it decentralized, but also that it uses seignorage-based rewards, similar to Bitcoin, but instead of just paying miners for security, the blockchain pays users to post and vote,” Scott told CoinJournal. “I think, so far, people are enjoying both the social and the rewards side of the platform.”

Steemit is powered by an open-source blockchain called Steem. On Steemit, users are rewarded when they submit their blog posts or vote on articles, images and commentary. The reward is distributed half in “Steem Power,” a token that allows for voting, and the other half in “Steem Dollars,” a token representing one USD.

Since launch in late-May, Steem’s market capitalization rose from US$7 million to over US$18 million at the time of writing. The Steemit blockchain is currently seeing twelve transfers, posts or votes every minute on average and page sessions have jumped by nearly six times in about a month.

Scott said that the team is still working on a number of core social media features for the platform, adding that there is still a lot more to be done to attract publishers and the independent bloggers community.

For instance, he mentioned a Steemit button on blogs that would “push an author’s article and their fan’s comments to the blockchain to be eligible for rewards.”

“Hopefully in a year there will be many bloggers using the platform to monetize their content without using advertisements. By the time we get there, we’d like to be much further along in our development of side chain plugins too, which will allow Steem to support a decentralized app-store,” Scott said.

He said that his long-term goal for Steemit is to have an entire ecosystem built around its concept, combining the benefits of blockchain technology and social media.

“We see Steemit giving social media back to the people, and with that we’d like people to know that Steemit is the place among all social media where their experience isn’t leveraged by people sitting behind closed doors,” Scott said. 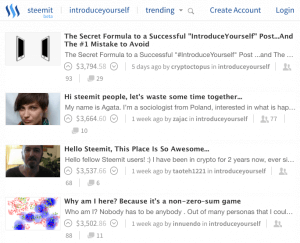 In the meantime, Scott said that he’s been talking with a number of publishers of content to further grow Steemit’s community. He also indicated that in the near future, Steemit will work towards increasing gateway partnerships to allow regular users to move their Steem Dollars to USD into their bank accounts. So far, cryptocurrency exchanges supporting Steem Power include BlockTrades and Bittrex.

Currently, there are over 100 posts valued at US$2,000 worth of Steem on the social media platform, and the top 20 posts have an average payout of a combined US$8,500 for posters and voters.

Popular topics on Steemit include politics, technology and cryptocurrency, as well as “introduceyourself,” news art and comedy.