Steemit, a new blockchain-based social media platform that lets users get paid for creating and curating content, has gone live with beta release.

The company, founded by Ned Scott and Dan Larimer earlier this year, aims at supporting social media and online communities by rewarding users with cryptocurrency, incentivizing thus the contribution of quality content.

“Our vision is to not only build an empowered community but give content creators an avenue to make money online without needing to advertise,” Scott, co-founder and CEO of Steemit, said in a media statement sent to CoinJournal.

“The versatility of the Blockchain has allowed us to create an incentivized social media platform to exchange conversation, creativity, empowerment, and value. We want to promote dynamic, creative dialogue and debate with an opportunity to earn.”

The platform utilizes a cryptocurrency token called Steem which people can use as voting power and exchange for USD.

Larimer, co-founder and CTO, said that new users are given a portion of Steem when they sign up. Users who initiate or improve the quality of discussions, through persuasiveness, clarity, grammar and formatting, can be rewarded appropriately. Similarly to Reddit, people can upvote posts and comments. 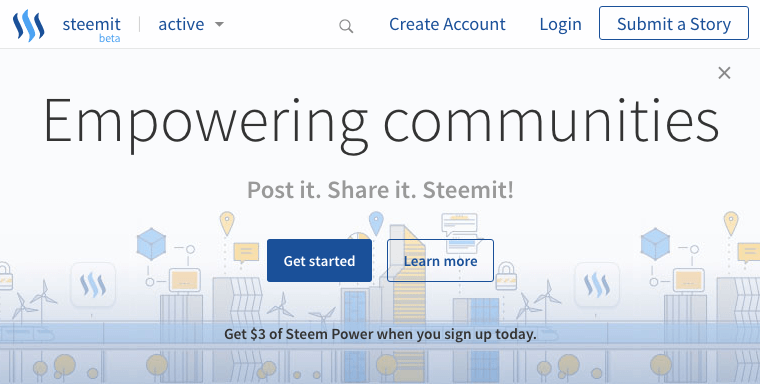 Voting input from community members is critical for Steem to accurately allocate payments to contributors. Steem rewards those who contribute the most to the total promotion of a piece of content and rewards the voters proportional to the ultimate reward paid to the content creator.

Steem is the fundamental unit of account on the Steem blockchain. All other tokens derive their value from the value of STEEM. STEEM should be held for short periods of time when liquidity is needed. Someone looking to enter or exit the Steem platform will have to buy or sell STEEM.

STEEM is constantly increasing in supply by 100% per year.

Steem Power is a requirement for voting for or against content. This means that Steem Power is an access token that grants its holders exclusive powers within the Steem platform.

Steem Power balances are non-transferrable and non-divisible except via the automatically recurring conversion requests.

Steem Dollars are created by a mechanism similar to convertible notes. Steem Dollars can be converted to US$1 worth of STEEM. The Steem protocol allows people to convert from SMD to STEEM and not the other way around.

The Steem network distributes payouts as 50% Steem Power for voting and 50% Steem Dollars. Rewards are distributed by the blockchain, similar to how miners are paid by Bitcoin.

Steemit is open to anyone around the world and the technology behind it is open source. The company, based in New York, is planning its first major reward issuance on July 04, 2016.