Physical Bitcoins are a fool’s folly. Bitcoin is a digital currency. Any instances of putting bitcoins onto coins are a novelty at best, a rip off at worst. Generally, they have the private key engraved right on them, with a sticker or something similar to protect it. You have to trust the manufacturer to not store the private key. If you give it to someone for payment, they have to trust that you haven’t spent the bitcoin or stored the private key yourself. Bitcoin exists in cyberspace and using metal to store a private key makes about as much sense as a Wikipedia book. Conversion from a new format to an old one erases the advantages and causes a whole host of new problems.

CoinKite is doing something different with OpenDime. Sitting somewhere between a hardware wallet and a physical bitcoin, their product is entirely new. OpenDime is a near disposable hardware wallet with only one use. Anyone can quickly verify its balance and ensure that the private key has not been revealed to anyone, including current and past owners. Users can fill an OpenDime many times, but can empty it only once.

OpenDime is a case-less USB stick with clear glue used on one side to protect the components. Two LED lights and some small components sit under the glue. In the center of the circuit board is a long rectangular hole and in the center of that, a peninsula coming from inside the glue. At the end of the peninsula is an engraving of a small golden padlock. 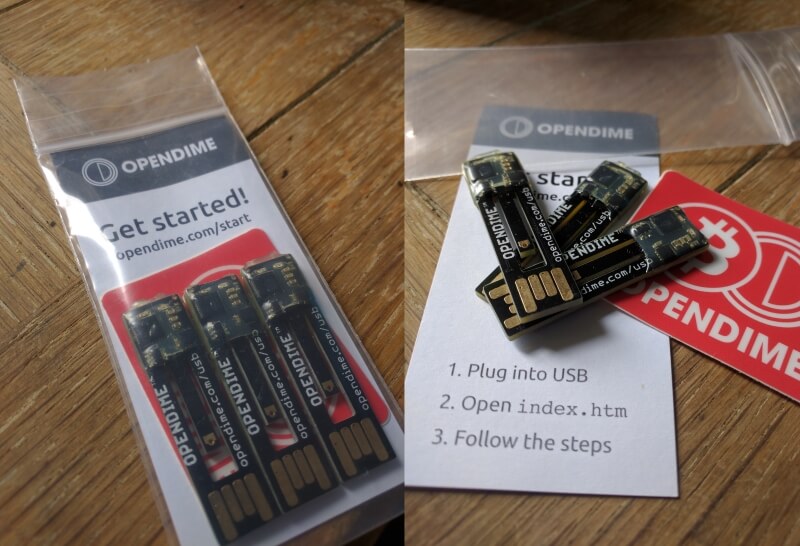 The barebones style looks cool but comes with a cost. While two of the provided OpenDimes had their components completely encased in glue, one had a small hole on one end, big enough for dust and liquids to seep in. CoinKite is trying to keep the price down by not including an enclosure. Perhaps they should spend just a bit more on glue.

Its that little peninsula that makes the OpenDime so unique. When plugged in for the first time, the computer sees the OpenDime as a normal USB storage device. On it are a few files and instructions. OpenDime does not come with a key pair generated. OpenDime’s instructions ask that 256KB worth of data be added to the device. From that, the software will generate a random key pair.

After that, the OpenDime is essentially a Bitcoin piggy bank. If the user plugs it into a USB port, the LED lights will flash green indicating that the private key is secure. In a computer, the OpenDime will also display the public key and its corresponding QR code. Users can verify that the private key is secure. Coinkite provides a link to make this easy. Any software that can verify Bitcoin signatures can also be used.

To access the stored bitcoins the user must break the peninsula. The LED lights will then blink red when inserted into a USB port. More important, it will change the files held inside the OpenDime, revealing the private key.

The selling point is a true off-the-blockchain anonymous transaction. Rather than sending bitcoins, OpenDime enables the physical trade of verifiable secure private keys.

There are advantages and disadvantages to the OpenDime system compared to a regular hardware wallet. Users can only drain an OpenDime once. Traditional hardware wallets are used an infinite number of times. OpenDime’s advantage is that it can be loaded with bitcoins and then sold.  Unlike hardware wallets or coins, the buyer can be assured that the seller never had access to the private key.

In practice, the experience is identical to the ones described in their promo materials. The one caveat to that was that the peninsula took a bit of work – and pliers – to break off. But it being too difficult to break is far preferable to it being too easy. 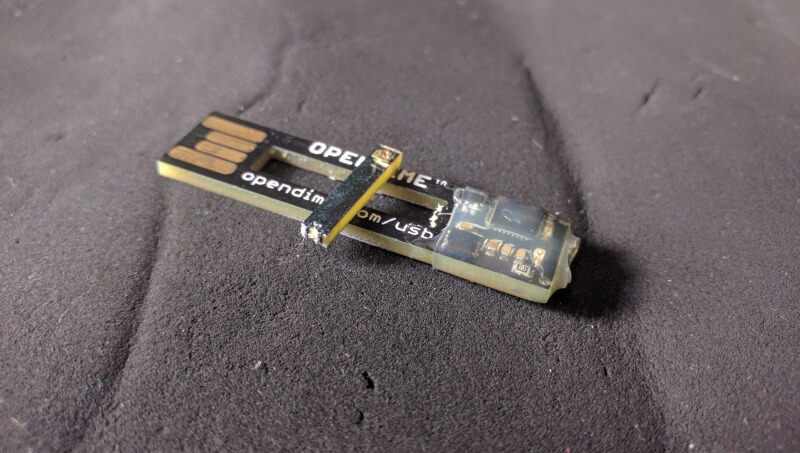 At about $15 a piece including shipping (less if you buy in bulk) they aren’t quite disposable. OpenDimes are not suitable for giving away a few dollars, or even twenty dollars, worth of bitcoin. But their price is low enough that it would not make much difference in a transaction including anything more than half a bitcoin. Their website mentions that as their primary usecase.

“We expect most Opendime units to be loaded once, probably with a ’round number’ of bitcoins, and unloaded exactly once in their lifetime. It’s impossible to know what’s happened in the meantime—just like a gold coin that has passed through many hands over the years.”

How I see myself using it, is as the aforementioned Bitcoin piggy bank. A savings mechanism that costs something to end. The only way to cash in the bitcoin held within is to break the device. Just like the only way to spend a piggy bank without a bottom is to smash it. It’s a large enough price to prevent impulse spending, but not much more than that.

I had given up on the concept of physical representations of bitcoins. Hardware wallets are undeniably useful and every serious bitcoin holder should own one. But something that can safely purchase something by physically handing it over is different. OpenDime’s solution is novel. It created a whole new product type and something that is uniquely bitcoin. It is the first and so far only, successful merging of physical and digital monies in existence.

My only criticism is the somewhat shoddy gluing technique, and that is truly minor. The price is too high to make OpenDimes truly “disposable” but that doesn’t seem to be their goal. No one will be using OpenDimes to purchase a drink. OpenDimes can be useful in purchasing a car, a house or anything large enough to make 15 dollars trivial. Better still, it can be used to teach children (or adults with low levels of self discipline) to save money.

In short, it is a new digital Piggy bank for the digital age.

[Note: Coinkite provided review samples for the purposes of this review]

Where to buy Drops Ownership Power: DOP surges to $2.63

Where to buy Avalanche: AVAX poised to retest ATH