South Korean lawmakers are preparing a set of bills to give cryptocurrencies such as Bitcoin and Ethereum, legal grounds in the country, a move aimed at protecting locals from potential risks in transactions.

Rep. Park Yong-jin of the ruling Democratic Party of Korea said on Monday that he would introduce three revisions in July to build a set of regulatory frameworks for digital currencies, according to a report by the Korea Herald.

More specifically, a new bill aimed at revising the Electronic Financial Transactions Act would require traders, brokers or other business entities involved in cryptocurrency transactions to get regulatory approval from the Financial Services Commission. Requirements would include the retention of capital of at least 500 million won (US$436,300) as well as data sufficient professional personnel and computer equipment.

Additionally, revisions to the laws on income and corporate taxes would allow financial authorities to prevent tax evasion from cryptocurrency transactions and impose capital gain tax on these transactions.

Matt Newton, market analyst at eToro, a European brokerage firm that offers bitcoin and ether trading, welcomed the move, stating that the upcoming regulatory framework to regulate and legalize Bitcoin was “a significant move considering South Korea has been a global leader in Bitcoin purchases this year.”

“The growing regulatory infrastructure around cryptocurrencies also helps protect investors from fraud and exchange failures, stabilizing the market – if not the price,” Newton said. “Price volatility in Bitcoin will continue, but as long as real-world adoption keeps gathering pace, the medium-term outlook is extremely positive.”

“Future gains in the value of Bitcoin depend on the legitimization and adoption of the digital currency as an acceptable real-world medium of exchange, using it to pay for bills, groceries and remittances, thus increasing volumes and driving the asset price.”

Cryptocurrency trading in South Korea and Japan surged this year, as Japan regulators officially recognized cryptocurrencies as a legal payment method in March.

Bitcoin trading against the South Korean won (KRW) is the fourth largest representing 8% of market share in front of the EUR at 5%, according to data from CryptoCompare. 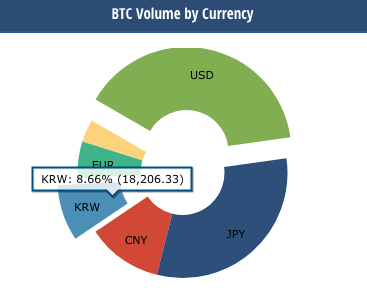 South Korea is the second largest market for ether trading. Ether trading against the KRW accounts for 27% of the world’s total ether trading activity, behind the USD at 31% and ahead of BTC at 23%. 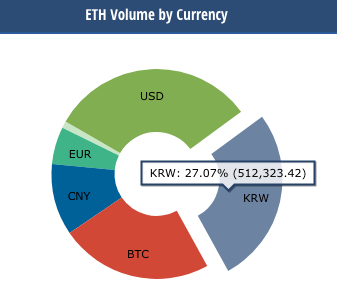 The news of an upcoming regulatory framework for cryptocurrency-related activity comes as Bithumb, the largest bitcoin and ether exchange platform in South Korea, recently lost billions of won in a hack.

Bithumb said it realized last week that one of its employees’ home personal computers was hacked. The breach is reported to have occurred in February but only discovered on June 29.

The exchange said it believes that personal data of 31,000 customers had been compromised, or 3% of Bithumb’s user base.

The state-run Korea Internet & Security Agency has teamed up with the Korea Communications Commission to investigate the hack, according to the Yonhap news agency.

A local news outlet reported that one customer lost 1.2 billion won (US$1.04 million) in the hack.

Bithumb has promised to cover losses of up to 100,000 won (US$86) per customer, and to add to this once it has been able to verify individual losses.

More than 100 Bithumb customers have filed a complaint with the National Police Agency’s cybercrime report center and are preparing to launch a class action against the exchange.