Steam bitcoin payments are live on Valve’s Steam store. Customers can use bitcoin to buy everything available on the Steam platform, including physical hardware.

The news was expected. Back in February, code leaked from the Steam translation project seemed to indicate that Valve was working on bitcoin payments and was using BitPay as the payment processor. Last week, a Steam developer posted to the game developers forum, indicating that bitcoin payments were coming. Yesterday, BitPay publicly confirmed that they were working with Valve to enable bitcoin payments on Steam.

Today, Bitcoin officially became supported. Oddly enough, without so much of a peep from Valve themselves. According to BitPay, Valve wants to use Bitcoin to reach international customers who have difficulty purchasing from Steam with Credit Cards. 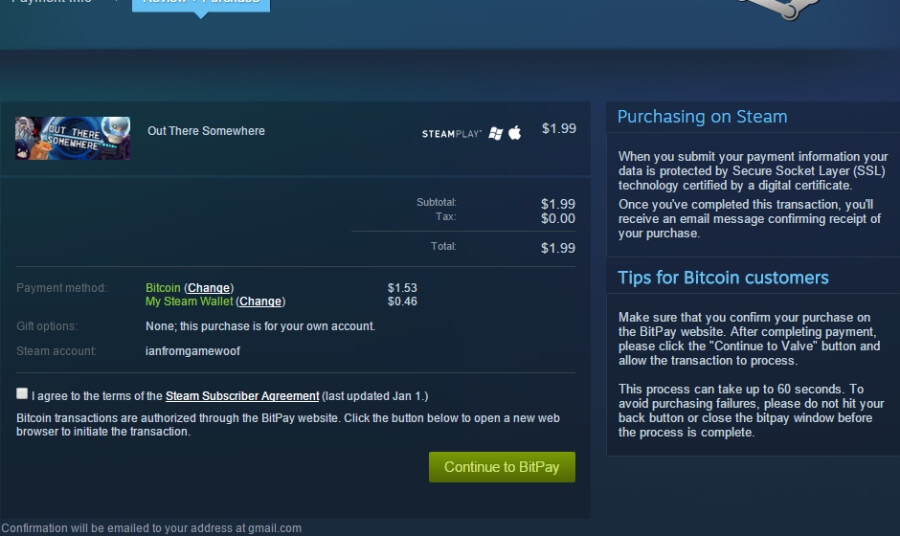 We tested using Bitcoins to buy Steam games and can confirm it works. Unlike the Microsoft digital store bitcoin option, Steam allows users to buy their games directly with bitcoin through BitPay. Microsoft’s store required customers to fund their account in ten dollar or higher increments.

Steam users won’t have to deal with that inconvenience, as Bitcoin can be used to fulfill an order, or even part of an order, directly.

Steam is the world’s largest distributor of PC Game digital downloads. They also recently announced a deal putting LionsGate films on the platform. It boasts more than 89 million subscribers and is in 237 countries, according to BitPay.

Steam bitcoin payments have long been a dream for bitcoin users. As mentioned, Valve won’t be holding onto any bitcoin and no bitcoins will be passed onto the game developers themselves. Still, this could familiarize the companies to bitcoin and perhaps encourage them to start offering their games directly to customers, without the added expense of a middle man like Steam.

But that is another issue for another day. Today, the world’s largest PC digital distribution gaming platform began accepting the world’s most valuable digital currency and that is cause to celebrate for Bitcoin holding gamers.