Previous article Temasek Was Never in Contact With Bitmain, Is Not Invested Next article

Start
Home Latest Cryptocurrency News Temasek Was Never in Contact With Bitmain, Is Not Invested

Temasek Was Never in Contact With Bitmain, Is Not Invested

Multiple media sites have reported on suspected problems between Bitmain and the supposed lead investor in their IPO. The story goes that Temasek, an investment firm funded by the Singapore government, is threatening to pull their pre-IPO investment in Bitmain due to disclosure issues. It isn’t clear where the original report came from, one cited “foreign media reports” while another cited a Twitter user, but it is all irrelevant. Temasek has denied any contact or investment with Bitmain. The news was fake, but not because the relationship between Bitmain and Temasek is not strained, but because there is no relationship.

The closest thing I could find was the CEO of Bitmain, Jihan Wu, not going out of his way to deny their investment when he was refuting that their relationship is strained.

Even if I needed to contact Temasek, I guess I would have used Wechat or something. Oversea phone call’s quality is very bad. I don’t have the convenience to comment most of the news related with Bitmain, but they are mostly as fake as this. pic.twitter.com/EaYYbzfEhX

The earliest article I could find linking Bitmain and Temasek was Cryptovest’s article on the Temasek allegedly threatening to pull out of the IPO. It cited a Twitter user’s anonymous sources.

Earlier this month, a similar situation happened. A report originating on WeChat and then spread to Chinese media and eventually CoinDesk indicated that Tencent and SoftBank were involved in the pre-IPO investment of Bitmain. However, that connection was later shown to be fake, as those companies denied any involvement with Bitmain’s IPO.

The original report came from WeChat user ipozaozhidao which roughly translate to “IPO Knew It Early” and is also known as Uncle C or Uncle C_C. But I was unable to locate a post on that account that linked Bitmain and Temasek.

When asked about the potential strained relationship between the two companies, a Temasek representative stated that “Temasek is not invested in Bitmain, and neither are we in contact with the company.” When asked to clarify that they never had a relationship with Bitmain they confirmed. 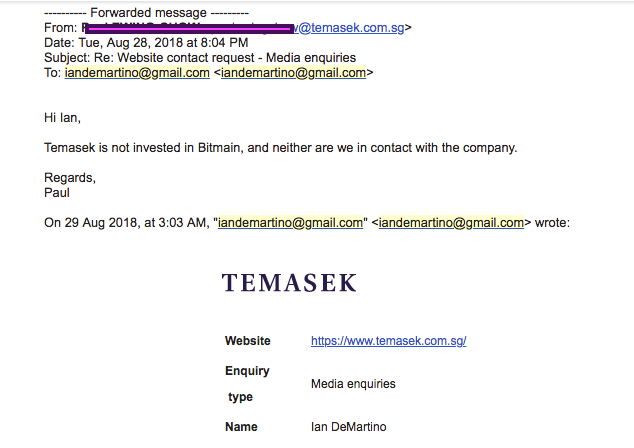 We have also reached out to Bitmain but have yet to receive a response.

This news event, for a lack of a better word, showcases the importance of reputable journalism in the cryptocurrency space. One Twitter user or one WeChat user is not enough confirmation to report on the news and reporters need to follow up with companies they are reporting on. Even depending on foreign news services seems irresponsible at this point.

It isn’t even clear that Bitmain is planning an IPO at all. While reputable media sites like TechCrunch have mentioned a company fundraise overview that explored the possibility, there hasn’t been any indication that exploration has turned into something more.

Meanwhile, the WeChat user that started this whole thing claims that the IPO will launch next week, which seems incredibly dubious. For comparison, Snap, the parent company behind SnapChat announced its intention to go public in November 2016. The actual IPO launched in March of 2017. While things may be different in Hong Kong, less than a week’s notice seems unlikely.

We will keep you up to date on any potential real Bitmain IPO news as it develops. We will also add any response from Bitmain to this article when we receive it.

Is it possible to mine Cryptocurrencies using the Cell Phone? Understanding the technology behind Mining